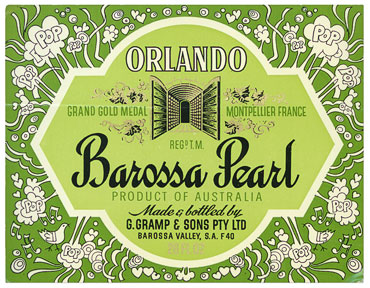 Famed in Australia for bringing a whole generation of beer drinkers into the wine category, Barossa Pearl was launched in 1956 by former Orlando Wines director Colin Gramp.

The resulting wine, called Barossa Pearl, was immensely successful and sparked the creation of a semi-sparkling sweet wine category, which included other high-profile labels such as Star Wine (pictured below).

However Barossa Pearl’s sales eventually declined and production was stopped in the 70s, while Star Wine was axed in the 80s. The company, which owns and produces Jacob’s Creek, believes there is a demand for this historic wine brand.

Speaking to the drinks business last week, chief winemaker for Jacob’s Creek Bernard Hickin said that Barossa Pearl was “not a long way from Moscato… and we have the expertise to make it.”

Continuing he said, “We might resurrect Barossa Pearl next year, although nowadays it has to technically come from Barossa.”

Supplying this growth are Muscat vineyards in Australia’s Riverland, Riverina and Mildura regions.

Hickin remarked, “There is quite a lot of Muscat in the ground,” which has been used to fill bag-in-box wines for the domestic market. However, he added, “A lot more has been planted in the last five to six years.”

The majority of Jacob’s Creek Moscato sales are in the US and Australia, although McKinnon said that Asian markets such as Japan were starting to “pick up”.

He admitted however that in the UK, sales of Moscato were “tiny”, suggesting that the maturity of the market coupled with the cooler weather may be hampering the category.

Meanwhile he described Moscato sales in Australia as “crazy”.

“People used to be embarrassed to drink sweet wines but now they don’t seem to care, and they are exploring other sweet wines, such as late harvest wines and sweet Rieslings.”

The “vast majority” of Moscato sales in Australia he said were in the AU$10-12 band, although a small “premium” sector is emerging at prices up to $25, led by brands such as Innocent Bystander, which produces a pink Moscato in bottles, as well as in cans and kegs.