Red trousers and the wine trade go together like Bill Koch and court cases.

Once the preserve of dandified gents, 2012 has seen the renaissance of rouge pantaloons, with everyone from Sloane Rangers to Hoxton hipsters embracing the red-legged look – both Prince Harry and pint-sized pop star Justin Bieber are fans, with actresses Demi Moore and Jessica Alba proving women can rock red pins with equal élan.

The recent fervour for red slacks has even spawned a website where people can post their red trouser sightings online.

Having only recently crossed over into the mainstream, red trousers were traditionally worn in displays of sartorial peacockery to show off and stand out. They were a visual indicator of class and signifier of status, with corduroy the preferred fabric, the word originating from le corde du roi, French for “the cord of the King.” The French army wore red trousers during the First World War, earning the soldiers the nickname “pantalon rouge.”

Dr Johnson noted a trend for scarlet breeches among sartorially savvy London gents in the eighteenth century. At that time, red clothing was limited to the rich, as only they could afford the expensive insect dye made from the cochineal beetle, which, when dried and crushed, made a magnificent red.

Art has a long history of painting male legs red, from Uccello’s 1470 painting The Hunt in the Forest to Ingres’ 1814 work Paolo and Francesca. French Fauvist Matisse flipped the script in 1922 with his provocative painting Odalisque in Red Trousers depicting a topless woman reclining on a chaise longue in red pantaloons. Red trousers have also weaved their way into literature; both Dylan Thomas and Philip Larkin were fans of the red leg, the latter often found parading around Oxford in a pair of pantalon rouge.

Oliver Mellors, gamekeeper in the DH Lawrence novel Lady Chatterley’s Lover, believes that simply the act of wearing red trousers could change a man’s behaviour: “If men had red, fine legs, that alone would change them in a month. They’d begin to be men again, to be men!” he exclaims.

Red: the colour of fire and blood, war and revolution. A colour of urgency, associated with life and death, love and danger, power and passion. Red is used in heraldry to indicate courage, and it takes a certain degree of courage to pull of a pair of red trousers with swagger. So without further ado, we bring you our top ten red trouser wearers in the wine trade.

Spotted a pair of scarlet pins at a tasting? Email your photo to lucy.shaw@thedrinskbusiness.com and we’ll include it in our next Week in Pictures roundup. 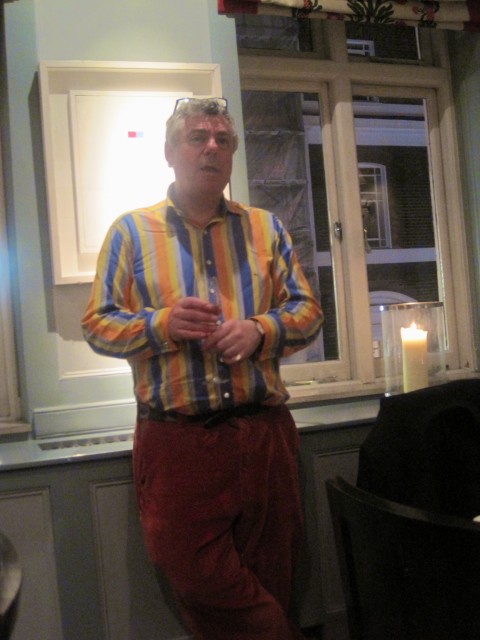 The ebullient director of Bibendum often perfects his dandified look with a bow tie, pastel-coloured striped shirt and pink cords, though is known to dabble in the red-legged look. Seen here, Champagne flute in hand, at Quo Vadis restaurant in London’s Soho sporting a fine pair of Burgundy cords matched with a Henley Regatta-esque striped shirt, Lebus is no shrinking violet. 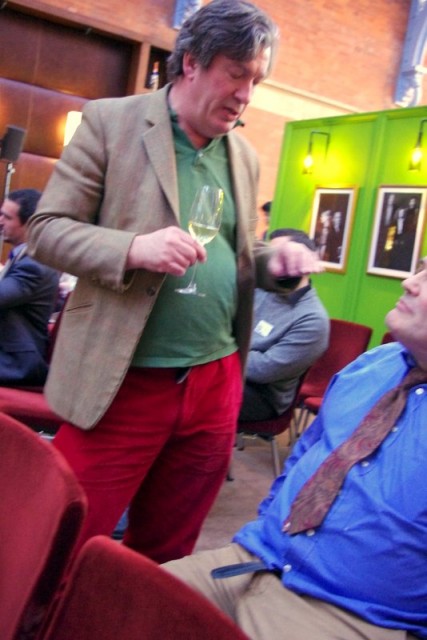 Austrian wine expert and historical author Giles MacDonogh, whose works include Great Battles, After the Reich, and 1938: Hitler’s Gamble, is one of the wine trade’s most avid red trouser wearers. In this snap, sent in by wine writer Jamie Goode, Giles is seen in a fetching cherry red pair talking to Champagne expert Michael Edwards at the Mumm & Perrier-Jouët Champagne Assembly in London. 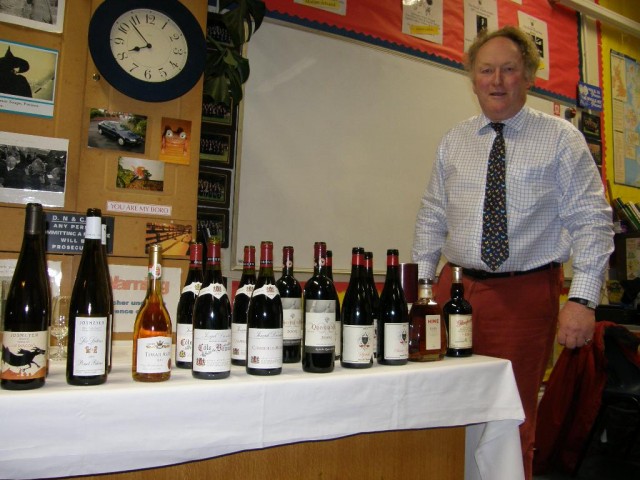 Pol Roger UK managing director Nick James has earned a reputation as something of a flag bearer for red trousers in the wine trade and is reportedly rarely seen without a pair. Captured here in elegant brick red breeches paired with a blue checked shirt and patterned tie, James admits the red trouser has become a Pol staple, the country look often completed with a Hungarian Vizsla. 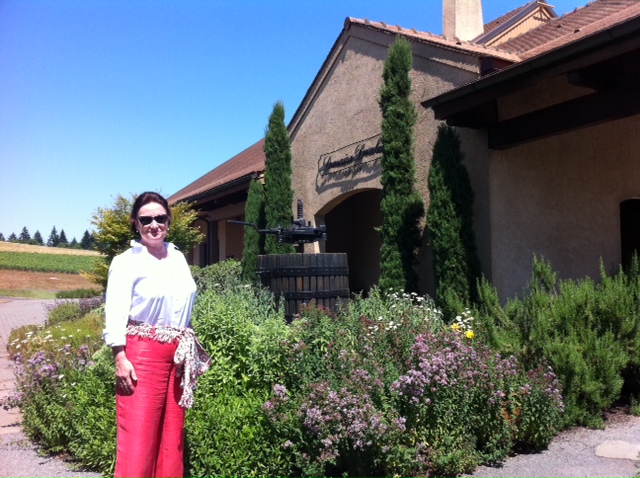 Who says men have to have all the red-trousered fun? Known for her Alice bands and fuchsia pink blazers, ever-elegant wine writer Margaret Rand is also partial to a pair of red slacks. Snapped here by our deputy editor Gabby Savage, Margaret models a fine raspberry pair in the afternoon sun at Domaine Drouhin in Oregon. 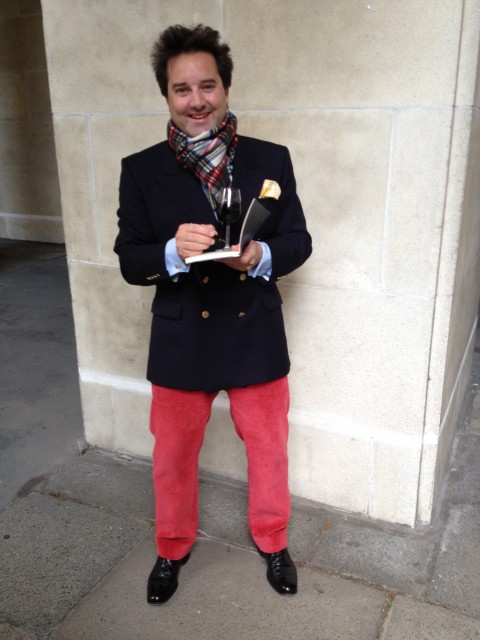 Dapper gent Will Lyons has been swaggering about in red trousers since the mid-nineties, long before he started penning a wine column for The Wall Street Journal. Considering them essential wear during en primeur week in Bordeaux, Lyons believes cords are “the first growths of red trousers.” He recently started a Twitter debate with red trouser skeptics Andrew Neather, the Evening Standard’s wine writer, and Telegraph wine columnist Victoria Moore on the merits of the red leg. 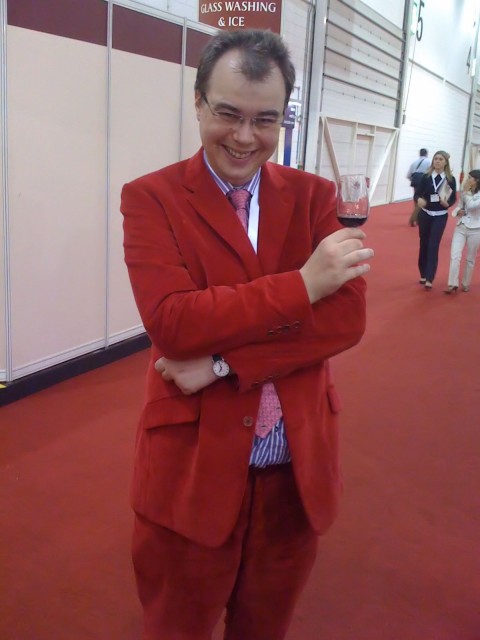 Self-styled “charming lunatic” David Strange, fine wine writer at wine and food website Elitist Review, has gone the whole hog with the red theme and donned a scarlet suit. Snapped here at the London International Wine Fair, perhaps Strange’s sartorial choice is a cunning way of hiding accidents at the spittoon? We applaud his courage in rocking the red look with aplomb. 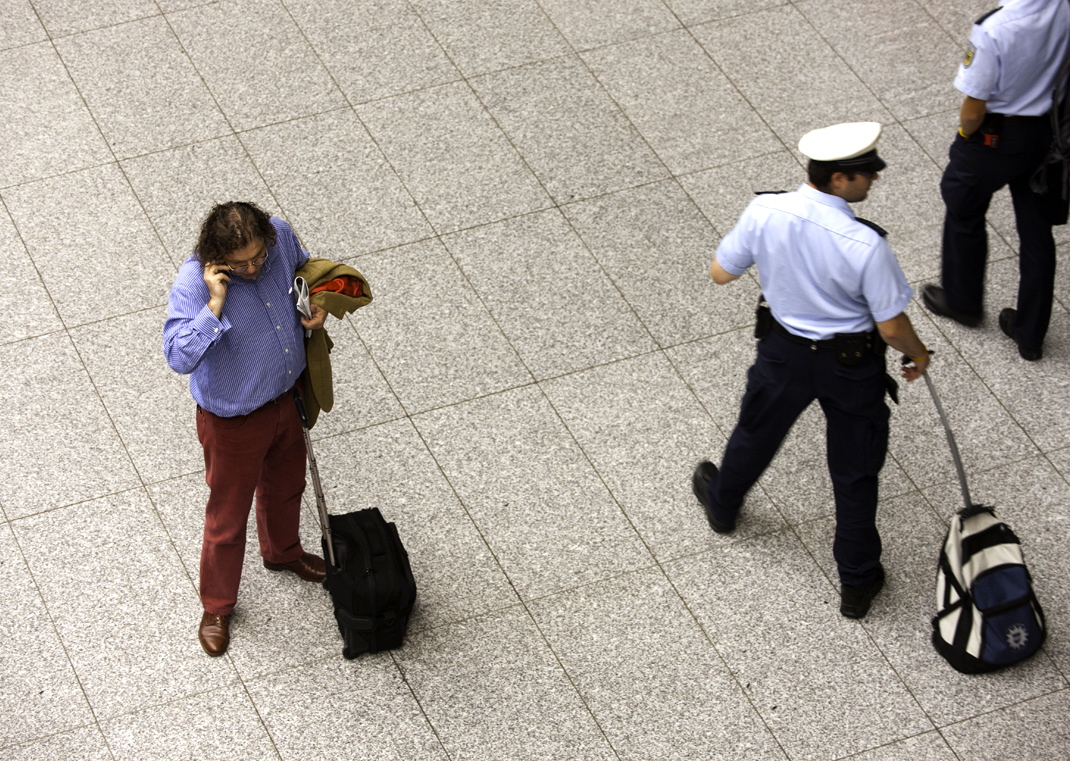 German wine legend Ernie Loosen is a fan of coloured trousers in general, owning both a mustard yellow and a terracotta pair, but on occasion he can be seen sporting a bright red pair, like the ones in this aerial shot taken in Frankfurt airport, where he’s stylishly matched the trousers to the red lining of his blazer. Perhaps he’s on the phone to his tailor ordering his next pair? 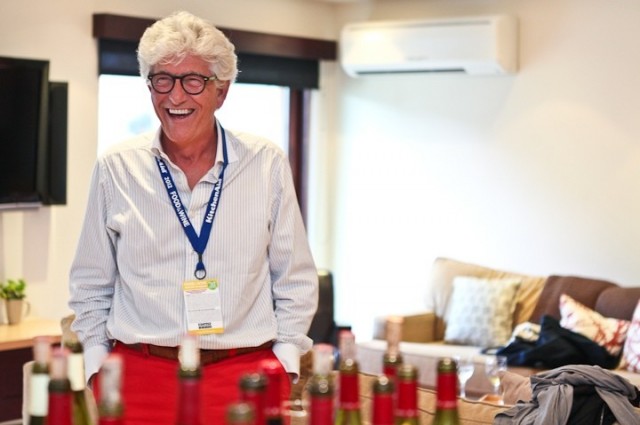 Colourful trousers for a colourful personality: Jacques Lardiere, who retires this year after an impressive 42-year stint as winemaker at Louis Jadot, is seen rocking a spectacular pair of fire engine red slacks at this year’s International Pinot Noir Conference in Oregon, accessorised with retro specs and a killer smile. 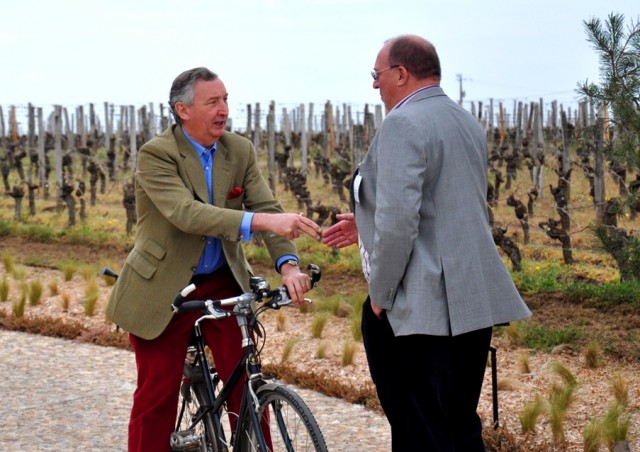 Proving that it’s not only Brits who have embraced the delights of red trousers, Jacques Thienpont, owner and winemaker of one of Bordeaux’s most revered wines, Le Pin, is fond of the pantalon rouge. Nattily attired here in Pomerol among the Merlot vines in a fetching pair of ruby cords matched with a pocket square in an identical hue, we only wish he were riding a red bicyclette. 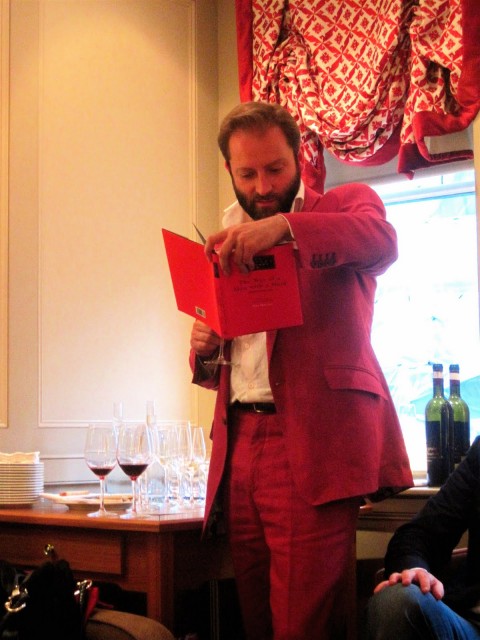 There could only ever be one man to take our red-trousered crown – the dashing, debonair and immaculately-clipped Tom Harrow, also known as the WineChap, who is so devoted to the red trousers cause, he dons his signature red suit on a near-daily basis, alternating between the redcurrant linen summer version seen here, and the winter alternative – a sumptuous suit fashioned from Burgundy velvet. Pictured enjoying a generously illustrated book on the art of seduction in the Petting Room of Quo Vadis in Soho, the smooth-talking bounder was giving a masterclass to a small group of enthralled guests on wines of rapture, comparing each wine to a stage in the seduction process. Tom Harrow, we salute you. And finally… 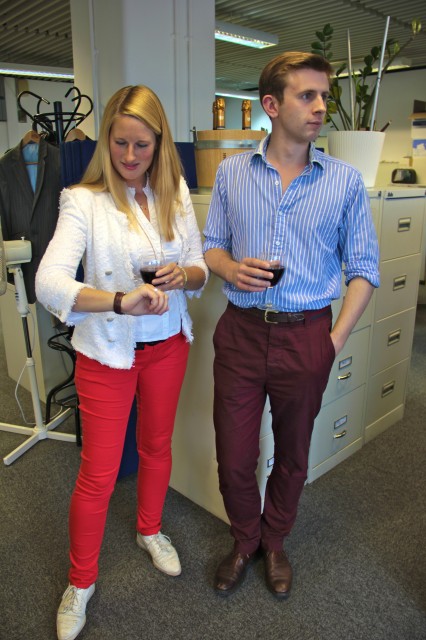 In honour of our top ten, staff writer Rupert Millar and I couldn’t resist donning our own red trousers and posing for this photo at db Towers. While I’ve gone a bit Hoxton with my London bus red skinny version, Rupert is very much representing the old guard in his fetching Chambertin-hued trews.