Summer by numbers: what’s in the other Pimm’s cups?

Besides the rain, Wimbledon’s other fixture is a jug of Pimm’s and always the No. 1 cup. But the Pimm’s family once boasted no less than six “cups” – what were they, and where did they all go? 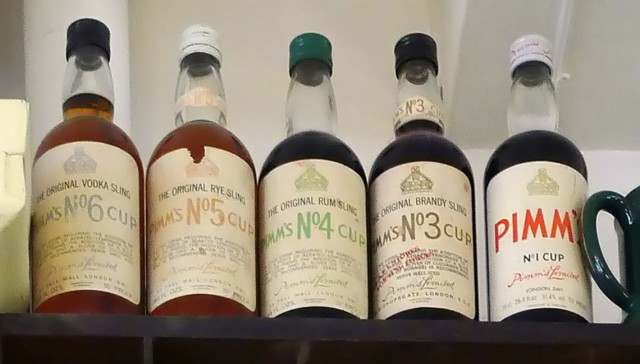 The numbers refer to the spirit at the base of the mix, sling or cup.

Perhaps it’s no surprise that the main survivor, the No.1, which has endured since 1840, is based on a quintessentially British mix of gin spiked with bitters and aromatics.

Over the 20th century, other variations followed:

Nearly all of these were phased out as sales fell during the ’70s. In 2005, No.3 was reborn as “Winter Cup” – with added orange peel and spices. No.6 is made in intriguingly limited quantities and called “Vodka Cup” – perhaps to distract the curious from wondering about the missing numbers.

The story goes that No.6 only exists because when a company took over Pimm’s in 1969, the chairman’s wife declared it her favourite and persuaded him to spare it.

These days the other numbers only live on in the odd online auction find, or among enthusiasts like drinks blogger David Bridgman-Smith, who may be the closest thing to a fruit cup anorak. Having recreated the missing numbers plus 7, he has just concocted new ones from 8 to 11 and said: “They are not official Pimm’s flavours, they’re a tribute.” He can’t foresee the lost ones being resurrected by brand owners Diageo. “If they were going to expand, they would probably relaunch No.6 first.”

Bridgman-Smith starts with a base of the spirit, red vermouth and ginger wine, then adds infusions like sticks of rhubarb to the “spring” cup or even green tea.

He says he’s already plotting No.12 and beyond.