Hormel Chili Cheese Brew becomes available in the US

The makers of US brand Hormel Chili have teamed up Modist Brewing Co to create a beer inspired by its chili cheese dip. 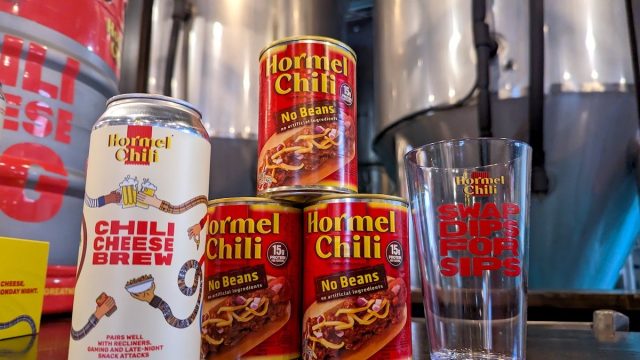 The recipe, which has been created “with a little bit of madness and a serious amount of chili-inspired spices,” will be available from 24 January in four-packs online for US$24 per pack while stocks last.

According to the creators, the “party-friendly” four-packs of Hormel Chili Cheese Brew will “ship in time for fans to enjoy when watching the Big Game on 12 February”.

Hormel Chili brand manager Jason Hron said: “Football season is just as much about the game as it is about delicious food and drinks, and the people you enjoy watching the game with.”

Hron added: “This year we were inspired to bring fans together and create something everyone can agree on – an irresistible sip that unites the best flavours of our famous Hormel Chili Cheese Dip.”

The American lager has been made using Minnesota Pilsner barley malt and flaked corn as well as “a mix of savoury spices and hints of cheddar cheese powder to bring the flavours of Hormel Chili Cheese Dip to life”.