In a recent masterclass, Sicilian producer Donnafugata explained the challenges that come with producing Passito di Pantelleria DOC – one of Italy’s most unique sweet wines. 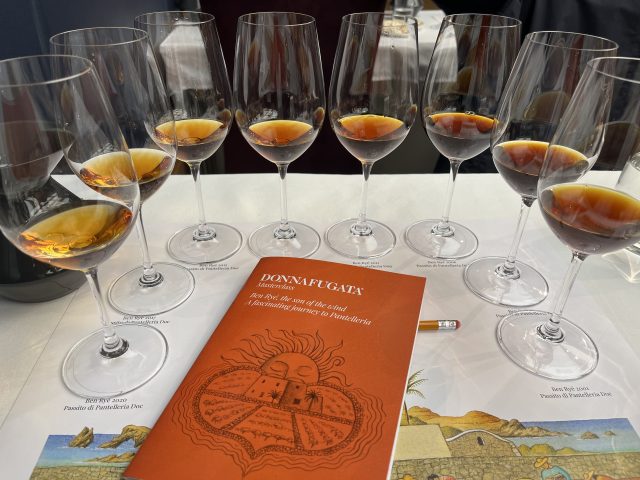 Donnafugata arrived on the island in 1989 and now cultivates 68 hectares there across 16 districts. Donnafugata owner José Rallo explained: “Pantelleria is a very windy island, and everything in the production process is made thinking of the wind – it can damage the vines, but it can be fantastic, bringing the aromas of the Mediterranean Sea.”

It was these winds that batter this rocky outcrop that is closer to Tunis than Sicily, the Sirocco from the south and the Mistral from the north, that inspired the name Donnafugata chose for its Passito di Pantelleria DOC, ‘Ben Ryé’, Arabic for ‘son of the wind’. The choice of language was a nod to Sicily’s historic connections to the Arab world, a linguistic link that can also be seen in the names of its grape varieties.

Zibibbo, derived from the Arabic word ‘zabīb’ meaning ‘raisin’, is an alternative name for Muscat of Alexandria and is the only variety permitted on Pantelleria. Winemaker Pietro Russo described it as: “maybe the most aromatic variety across the Muscat family…Thanks to the richness of the volcanic soil of Pantelleria, it gives its best.”

Grapes are cultivated across the island, and Donnafugata has vineyards at altitudes ranging from 20 metres above sea level to 400m. To provide shelter from the strong winds, the plants are pruned into low bush vines and are grown in ‘conche’ (hollows).

Lack of water could be an issue, with the average annual rainfall from 2013 to 2021 being 449 millimetres, particularly in light of climate change, but Gabrielle Gorelli MW, who was presenting at the masterclass, pointed out: “Sicilians have been without water for so long, they are experienced with climate change”. Russo pointed out: “We’re not allowed to irrigate, also because we don’t have water.” Fortunately, humidity at night keeps the vines in good condition – the main hazard to the health of the plants is wild rabbits.

As well as the distinct terroir of Pantelleria, the production of Passito di Pantelleria is set apart by its two harvests. The first takes place in mid-August, where the bunches are picked and then laid out onto racks for three-to-four weeks to be dried by the sun and the wind and are then de-stemmed by hand.

The second harvest, in September, provides must from fresh grapes. Sultanas will then be added up to eight times throughout the four-to-six week fermentation, bolstering the sweetness and acidity. Fermentation is eventually stopped by cooling and racking off the sultana pomace.

For Ben Ryé, Donnafugata then ages it in stainless steel for eight months, and then in bottle for a further 12 before released onto the market.

In a vertical tasting of eight vintages from 2020 to 2001, the evolution of the style of Ben Ryé, and the ageing potential of Passito di Pantelleria.

The 2020, released onto the market earlier this year, has what Gorelli described as a “luminous character”: peach, apricot and a hint of mint at the end but, in his words, “it needs time to be overt”.

Tasting the 2017, Gorelli noted that it was at this point that the wines’ ageing potential begins to become clear: “It switches to a profile that starts to be spicy and piquant.”

Citing the wet and cold 2015 vintage, a contrast to that year’s conditions elsewhere in Europe, Gorelli pointed out that Sicily tends to be an exception: “Sicily doesn’t respond to generalisation…it is often the odd one out”.

“The ’15 has finesse,” he continued, “with this peppermint character. Yes, it’s marmalade, but it has a bitter twist.”

“2013 was the exception when Sicily’s vintage was like that of the rest of Europe: cool and wet. It is the year of the switch, when the wine becomes something darker, with notes of roasted coffee, cola, and bitter herbs.”

In the 2011, the salinity of the Mediterranean was particularly noticeable. “Despite being viscous, it still has this ability to be refreshing and salty…the brininess counteracts density from the sugar.”

Gorelli compared the 2006 to Madeira: “High tone, an estery touch on the nose – tamarind, molasses…on the palate it is slender, with a briny saltiness.” As for what he would pair, he suggested bottarga. The 2006 vintage also marked the point from which the addition of fresh must was much more consistent. Gorelli stated that it was 2010, not tasted at the masterclass, that marked Donnafugata finding Ben Ryé’s style.

“I like to think a wine like this can be enjoyed alone, or in company,” Gorelli joked about the 2004. “It’s more finesse, more reserved – it still has dried figs and dates, but it’s very polite.”

Of the 2001, a vintage of low rainfall and high summer temperatures, Russo noted that its charms were in its “peculiarities”: “Here we get less of a fresh fruit profile”. Instead, it offers a combination of coffee and capers

Providing her closing thoughts on the tasting, Rallo said: “This wines goes against prejudices…Every year is a new challenge to do something different and to do something better.”

Donnafugata also cultivates 35ha in Etna, where it was recently announced that nine new territories would be included in the DOC.