Map of Etna DOC redrawn to include nine new territories

The map of the Etna DOC wine region has been updated to make it easier to identify the myriad contrade (districts or crus) on the slopes of the volcano, with nine new contrade identified as part of the process, taking the total to 142. 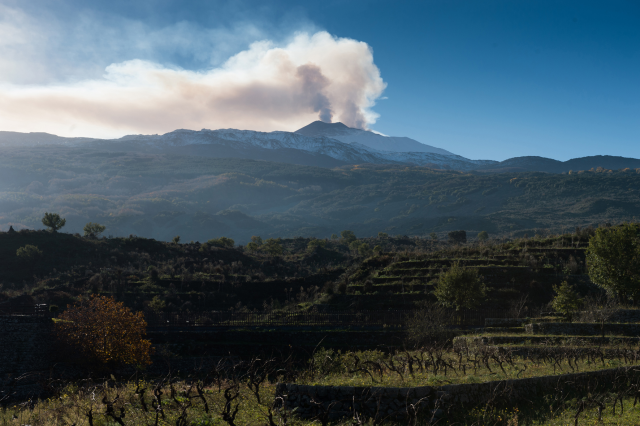 The recently completed work, which was undertaken by the Consorzio Tutela Vini Etna DOC, with a contribution of the Agriculture Department of the Department of Agriculture of the Sicilian Region, accurately identify the exact position and border of each contrada within the Etna DOC production area, which can be clearly identified on a ‘real’ map.

Previously, the contrade had been identified through interpretations of old cadastral maps, which feature now obsolete terrain and territorial limits that no longer exist due to the eruptions and activity of Mount Etna.

The new map provides a better snapshot of the multifaceted mosaic of contrade that surrounds Etna’s wine producing area at the foot of the volcano from North to South. It was created from the most recent topographic surveys which were transferred in cartographic layers obtained through multiple surveys with GIS (Geographic Information System) instruments.

Francesco Cambria, president of the Consorzio Tutela Vini Etna DOC said the painstaking project was just “the first step in an even more articulated study project of the Etna area”.

“There has never been a study of this type before,” he said. “The goal is to definitively clarify the exact boundaries of the Etna contrade existing within the DOC and to identify the new ones that will be officially introduced in the coming months.”

He said it indicated the “incredible biodiversity” that Etna offers, not only in the different vine slopes of the volcano, but also though the “facets of the many contrade, starting from the different stratifications of the lava flows and the exposure of the vineyards”.

“All factors that make each contrada almost unique within the Etna area, capable of giving different nuances to its wines,” he said.

During the surveying process, the updating of the borders led to the identification of 9 new districts, thanks to the collaboration of the producers belonging to the Consortium. This will be officially included in the next update of the production specification, taking the total number to 142.

The 142 contrades are divided across 11 municipalities, with 41 in Castiglione di Sicilia, 25 in Randazzo, 20 in Zafferana Etnea,13 in Piedimonte Etneo, 10 in Linguaglossa, nine in Trecastagni, eight in Milo, six in Viagrande, five in Biancavilla, four in Santa Venerina, and one in Santa Maria di Licodia,

The Etna DOC was established in 1968 and is the oldest in Sicily. Since 2011 it has acknowledged the contrada as legally equivalent to the UGA (additional geographical units).

“It is a first map, on a smaller scale, which will be further updated to enhance territorial differentiation in an even more precise way” Maurizio Lunetta, director of the Etna DOC Protection Consortium added.

“This is a first step to learn more about the styles of the individual contrade and to go even deeper in detecting the differences within the denomination”.

“This latest project will allow us to interpret all the variables present within each contrada in detail, based on the differences between soils, altitudes, microclimates,” he said.