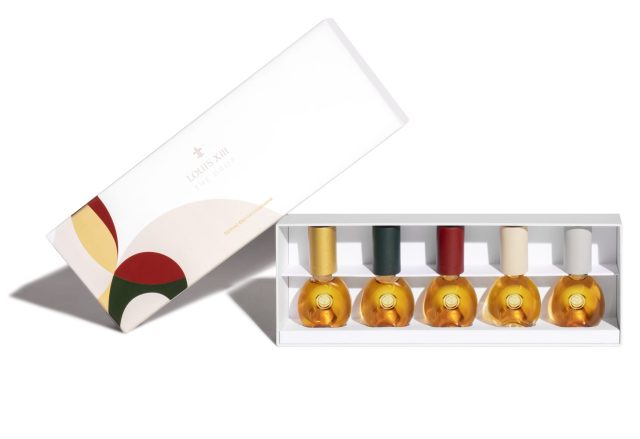 “One of the main things that pushed us to create The Drop is that one drop is enough to have the full impact of this overwhelming liquid,” Ferracina explained. Retailing at £160 for an individual one centilitre (10 millilitre) unit (or £750 for a box of five bottles), it certainly isn’t cheap, but it is a significantly lower entry point than Louis XIII’s 5cl “The Miniature” at £700.

The five colours available each link to a specific aspect of Louis XIII – the clay-coloured cap, for example, is intended to evoke the terroir of Grande Champagne. “The idea is to carry it with a strap of a different colour or with a different colour cap, according to what your state of mind is,” Ferracina elaborated.

This element of customisation, treating it like an accessory that can be made one’s own, was developed to appeal to a new generation of consumers that might not necessarily go for white-gloves and crystal glasses: “We think that it is enticing new, young customers…They want to be modern, they want to be more spontaneous, even if they want to keep the level of sophistication of Louis XIII.”

Ferracina suggested that, unlike with the larger decanters, The Drop can also be drunk in a different way that might shock some Cognac connoisseurs: “We propose that you drink The Drop directly from the bottle.”

Ferracina envisages this new product as something to be consumed communally, “wherever” you may be: “The idea is to have a celebration of this Louis XIII moment with a group of friends…You do a tasting together”.

“Thinking a century ahead”, as the company’s motto goes, has been key to its success in making its Cognac and in ensuring the continued success of the brand, according to Ferracina: “Louis XIII is a positive tension between tradition and modernity…We are leaving the present moment with an expertise that is coming from the past.”

For a brand that prides itself on being premium, offering a lower entry point might run the risk of undermining that prestige. However, Ferracina argued that an assessment was made beforehand to ensure that The Drop would be to the benefit of Louis XIII: “The quality of the product, the quality of the liquid, and all the attention we have given The Drop is exactly the same as we gave to the creation of the Louis XIII collection”.

“We are not going to overwhelm the market with The Drop,” Ferracina continued, “We have concern of scarcity of coming from the fact that we don’t have enough liquid for everyone. So we are not going to sell The Drop everywhere. It is a new opportunity to recruit a different customer profile that is never going to be detrimental to our existing line.”