The luxury department store is the first venue for the brand’s new look boutiques, “setting the indisputable craftsmanship of Louis XIII into modernity”, according to UK & Ireland director Morgan de Prémorel. 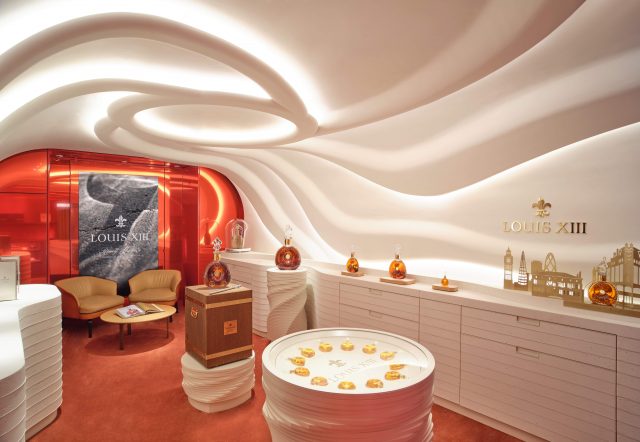 While the Rémy Cointreau-owned Cognac brand is known for projects that won’t be released until the next century, including a film by John Malkovich and a song by Pharrell Williams, the boutique on Harrods’ lower ground floor can be experienced in the immediate future.

The space, designed by French architecture firm RDAI, represents “the Swirl of Time”, with the intention of evoking both the spirit’s lengthy ageing process and the action of swirling it in the glass. Though tailor-made for the Knightsbridge store, the design will serve as a blueprint for the brand’s global retail boutiques.

Somewhat contrasting with what one might expect from a brand with such a historical pedigree, de Prémorel quips: “You can call it a boutique, I call it a spaceship!” Indeed, the digital screen on the wall is designed to transport viewers to Grande Champagne and give a glimpse of some of the craftsmanship that goes into the luxury spirit.

The futuristic theme continues upstairs where another instalment takes Louis XIII’s new advertising slogan “think a century ahead” to a different level. A display shows two mechanical arms, similar to those on a car assembly line, swinging crystal glasses (with cognac in) around before clinking the glasses to produce the perfect G-sharp.

As entertaining as the robotic toast is, for de Prémorel it is symbolic of a “new era”, one of emancipation from “the rigid codes” that typically come with Cognac. He also teases that in 2023 “there will be in another innovation, to do with sustainability”.