Campio Brewing, based in Edmonton in Canada, has launched The Wild Ales Series which includes a pair of limited edition barrel-aged beers. 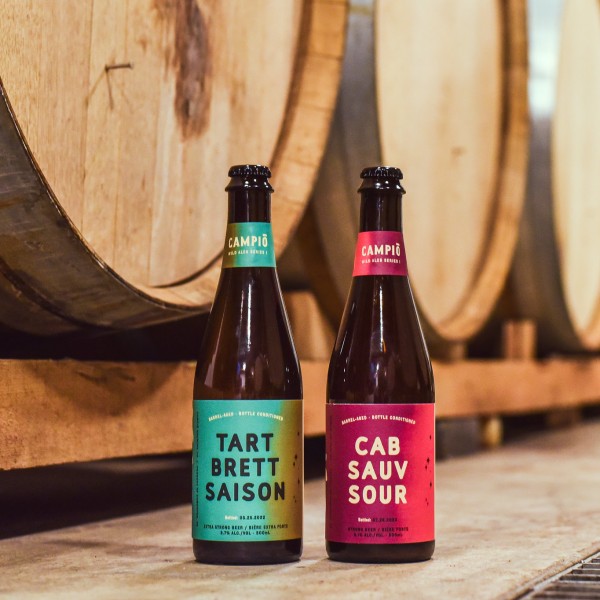 The releases include the 9.7% ABV ‘Tart Brett Saison’ and the 8.1% ABV Cab Sauv Sour and, according to the head brewer Brett Geislinger, showcases “what we do best and what we love about this craft”.

Tart Brett Saison has been made with a base saison brewed with a mix of grains, including barley, wheat and rye which was then blended with a splash of sour ale and rested in a foeder where a mix of wild yeast and souring bacteria were added and given time. According to Geislinger: “Brettanomyces yeast brings notes of white wine and citrus, and a subtle acidity with the ex-Chianti wine barrels adding a pleasant tannic, drying feeling. This beer was then bottle conditioned for around five-six months, adding a bright carbonation and elegant effervescence, completing a years-long journey from grain to glass” resulting in a “funky, fruity and lightly tart saison”.

The Cab Sauv Sour was made using a new innovative yeast from Escarpment Labs called Optimus Primary – a special strain designed to develop the funky acidity found in wild fermented beers that usually takes years to develop in a much shorter time frame of about a month. Geislinger outlined how “after funk flavours began to develop, this beer was hit with Cabernet Sauvignon wine must for a secondary fermentation and then racked into ex-Chianti wine barrels to age for six months. After the right barrel characteristics found their way into the beer, it was then off to conditioning tanks and eventually bottles”. Geislinger said: “Expect a beer reminiscent of your favourite glass of natural red wine, but with added layers of complexity” and added that the beer’s “notes of dark fruits, plum and citrus are balanced with a tannic oak barrel character, and funky yeast notes of tropical fruit and pineapple”.

A launch party for the Wild Ales Series will take place on 30 November with an intimate evening downstairs at Campio surrounded by the barrels used to age these unique beers. Campio Brewery operations manager, Teaghan Mayers will join Geislinger in answering questions from beer fans interested in the new brews.

Tickets for the Wild Ales launch can be reserved online for US$80 per group of four guests, with admission including snacks and one bottle of each of the two beers for the group, plus 20% off orders from the regular menu.