Though there have been challenges both climatic and economic, Languedoc producers are still optimistic about both the 2022 vintage and the demand for their wines on the UK market. 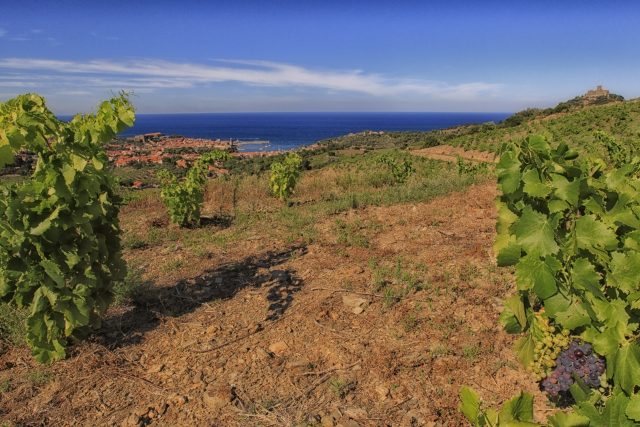 “In 2021 we had a bit of frost, a first for us,” revealed Paul Cambon of Domaine de la Cedrillon in AOP Corbieres. “With 2022, everything was fine until July when a child threw a firework in the forest and it started a fire, causing smoke taint.”

One of the upsides of a, quite literally, scorching summer has been the relative health of the fruit. A spokesperson for Clos de L’Amandaie told db: “It’s a very good vintage – no disease, no mildew. The quantity is very good to okay…we will need to correct the pH a bit in the cellar though”. He also said that smoke/fire had not been an issue for its vineyards.

While lack of rainfall was a concern, and the region has strict rules on irrigation, some producers fared better than others. Thibaut de Braquilanges of Château de Lastours in AOP Corbieres: “We are very lucky at Lastours to have water [due to a reservoir] and to be able to water the vines within the law. The water is to save the plant, not to produce more.”

But, de Braquilanges is not complacent: “It’s important to take decisions now…We need to find varieties that are resistant to dryness, we need to conserve rainwater…In the South of France there are a lot of old people with a plot or two and for them it is going to be very difficult. We are a large winery and we can invest in the future.”

However, there is more than just drought to contend with. Despite the hot summer and the suggestion that this vintage was disease-free, De Braquilanges said: “Disease is still a huge issue. As of the last 10 years, after veraison, pests, like butterflies, and mildew continue to appear.” In the case of the butterflies, pheromones are used to sexually confuse the female butterflies that would otherwise lay their eggs in the grapes.

“We need to listen to nature. Organic is not easy, but our climate makes it easier for us than it is in Bordeaux or Burgundy,” he concluded.

“I think Brexit has impacted the British more than us,” confided the Clos de L’Amandaie spokesperson. De Braquilanges said: “The UK is still an attractive market for us. Historically you [the UK] are the first client for French wine.” When asked if the UK’s recent economic woes were a cause for concern, he pointed to a previous instance of flexibility: “Before, we have changed the range in order for our distributor to change the prices.”

From the British side, the interest is also still very much there. Photographer Georgia Glynn-Smith, whose images of the region’s winemakers were exhibited at the tasting, said: “One of the words that kept coming up was ‘value’…the Languedoc is excelling in making exceptional wine at a price that we can all still afford”.

While the viability of international varieties is being tested, last month it emerged that the European Union had prevented Languedoc producers from using Vermentino on labels from this vintage, sparking fury.