Is shochu the future of Japanese bartending?

Japanese shochu is widely known as Japan’s most iconic spirit. However, Devender Sehgal sees the immense potential of this staple beverage in cocktail making.

Devender Sehgal joined Mandarin Oriental Hong Kong in 2021 as the beverage manager. He took charge of designing the beverage program for The Aubrey – the latest Japanese izakaya concept of the hotel group.

To anchor the bar identity, Sehgal deliberately chose to put shochu on show in the cocktail program. Having honed his classical bartending skills at 3-starred Italian restaurant 8 1/2 Otto e Mezzo BOMBANA Hong Kong, he came across the product on a trip organised by Japan Sake and Shochu Association (JSS) to visit several distilleries in Japan.

“Shochu is consumed heavily in Japan’s domestic market, but the product hasn’t received the love it deserved,” said Sehgal.

Shochu has diverse flavour profiles that make it an incredibly versatile drink. Unlike sake, which the flavours are relatively delicate, shochu has a diverse profile as it can be made from 50 different base ingredients, the main ones being sweet potato, barley, rice, buckwheat and sugar cane. Honkaku Shochu is the product with top classification that it is single-distilled and crafted in small batches, allowing the pure flavours of the primary grain or starch to shine through.

He explained: “Shochu has a lot of flavours, just that people are in general unfamiliar with the product and don’t know how to use it.”

In order to better educate his customers, his strategy is to marry the unfamiliar with the familiar. “Although the ABV of shochu sits around 25-30%, normally the flavour is rather intense, thanks to the one-time distillation process. As shochu can be made from various base ingredients, we can actually relate their application to different essential bar spirits – for example, barley shochu a ‘whisky’, and sweet potato as ‘vodka’.”

“Speaking of its low ABV, I know that may not be preferable by most bartenders, who are usually drawn to use high ABV spirits instead. However, when others think shochu is hard to work with because of its low ABV, I’d take it as an opportunity for bartenders to play around – you can easily make a low-alcohol tipple by creating cocktails with shochu on its own, or step up the ABV by adding high-proof spirits.”

Despite shochu still remains as a niche in the global bartending scene, Sehgal wants to impress drinkers with a well-structured cocktail program developed based on the regions of shochu. Similar to wine, shochu actually has its own internationally protected geographical indication (GI) that recognises the special qualities of a product from a particular region: 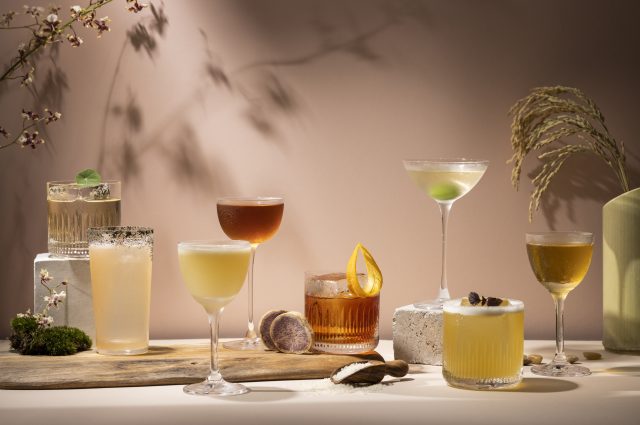 Only made using imo (sweet potato) from Kagoshima prefecture on the island of Kyushu, Satsuma shochu is elevated into a premium chuhai (shochu highball) with the addition of sauvignon blanc juice which teases out the fruit and sweet potato characters of the shochu; while Sehgal highlights the distinctively rich and toasty flavour of Iki shochu – made with mugi (barley) from Iki island in Nagasaki prefecture – by layering on another Scotch whisky with vermouth rosso and Benedictine to create a Bobby Burns with a twist.

Carrying beautiful floral characteristics reminiscent of sake, Kuma shochu retains the fragrant kome (rice) from the city of Hitoyoshi in Kumamoto prefecture. Sehgal concocted a shochu made from the finest polished rice, wutg the addition of sweet potato shochu, amontillado sherry and banana liqueur, to lend its complexity and depth; last but not least, Ryukyu awamori – thought to be the oldest spirit distilled in Japan hailed from the island of Okinawa – is a shochu made with Thai long-grain rice, and is mixed with lillet blanc, white crème de cacao, champagne vinegar and mirin to offer a glass of martini-like cocktail with umami.

Known to be a national spirit, shochu has long been mainly consumed by the domestic market. In recent years the export of the market surged as the demand from overseas Japanese establishments keeps rising. “Normally people prefer to enjoy shochu together with food as the spirit is very food friendly, yet right now, shochu cocktail is not quite popular amongst even Japanese people,” Sehgal explained.

According to Sehgal, the trend is moving as he spotted some Japanese distillers have recognised the space and started creating shochu with higher ABV for cocktail purposes.

Indeed, as previously reported by db, a Japanese shochu called DAIYAME 40 has been designed with the world’s top bartenders and most discerning drinkers in mind. Housed in a straight-sided, fluted black bottle with gold lettering, its distinctive and beautiful. But it’s what’s inside that really counts: it has been crafted to be powerfully-flavoured and deliciously smooth, mixing a subtle sweetness with a gently peppery fiery edge – it has 40% abv – while bursting with exotic fruit characters, above all lychee, with its ripe melon and rose petal notes.

The shochu that’s shaking things up