Described as “England’s first Bourbon”, Never Say Die is a celebration of horse racing, The Beatles and the end of tariffs – and its unique flavour comes from its transatlantic voyage. 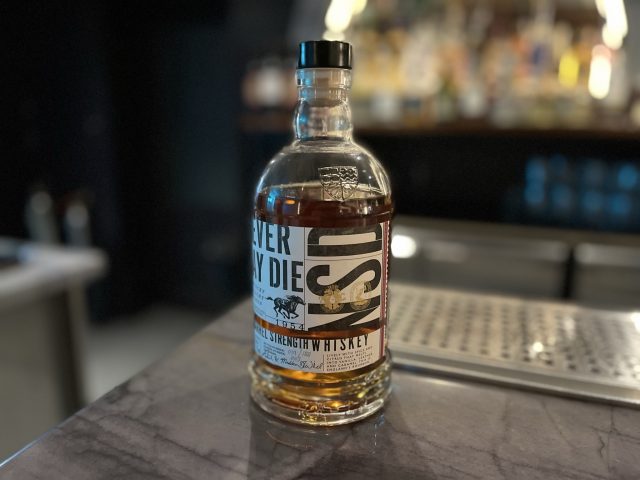 Northerner David Wild and Kentucky native Pat Madden first met at Queens’ College, Cambridge, but it wasn’t until 30 years later at a reunion dinner that their idea to create a spirit that brings the US and UK together started to take shape.

Wild explained the extraordinary story that inspired the branding: “Never Say Die was conceived at the Kentucky Derby – we were drinking Mint Juleps and I was talking to Pat. He was telling us about his father’s horse, Never Say Die. On the night it was born in 1951 it wasn’t very well, so they stuck some Bourbon up its nose and three years later it won the English Derby ridden by Lester Piggot.” The magenta and silver on the label represents the silks that Piggot wore.

But, as Wild revealed, the story didn’t end there: “In Liverpool, a poor woman sees this rank outsider at 33/1 and puts a bet on, and she wins big. She then buys the Casbah in Liverpool and her soon, Pete Best, his first set of drums.” Best went on to befriend Paul McCartney, John Lennon and George Harrison and became the original drummer for The Beatles.

The whiskey itself has a higher rye content than most other Bourbons (25% rye, 71% corn, 4% malted barley), but the true difference lies in the transportation of the spirit.

They say it’s the journey, not the destination, and that could not be truer for Never Say Die. As brand ambassador Dan Priseman said: “In principle this is the first English Bourbon, but it does start its life in Kentucky for five years in storage…We’ve brought 100 barrels over to begin with…Most barrels in Kentucky sit in a warehouse and never move, they wait for changes in the weather during ageing. What happens over the sea voyage, as the boat is rocking, is the Bourbon’s interaction with the wood increases. The charcoal [from the charring of the barrel] latches onto impurities and takes away that fiery edge.” The result is an accelerated maturation of the spirit, creating a far more drinkable Bourbon than one of the same age that hasn’t been on the voyage.

Fittingly, the Bourbon arrived in the UK at Liverpool docks in the summer. The barrels were then stored at the White Peaks Distillery in Derbyshire, which will use the emptied barrels for its single malt.

“We’re three weeks old,” jokes Priseman, in reference to how recently the Bourbon was bottled, “we don’t have a house style yet, but you should get some baking spices and burnt orange on the nose.”

But the journey from Kentucky to being bottled in England hasn’t exactly been plain sailing. Production of the Bourbon started in 2017, but the tariff dispute (resolved on 1 June this year) between the UK, EU and US, delayed things. “The benefit was our whiskey got to spend a little more time in Kentucky,” remarked Priseman.

But, now that transatlantic relations are restored, much to the delight of distillers in the US and UK, there are plans for the drink to make the return journey. “There is a massive demand to taste it in Kentucky, so we are going to send it back, but in bottles – maybe we’ll send it back in barrels in the future,” Wild shared, “now that’s taking coals to Newcastle!”