Champagne Bollinger is marking 60 years of the James Bond films with the launch of a Dr. No-inspired limited edition from the “bold and vibrant” 2007 vintage. 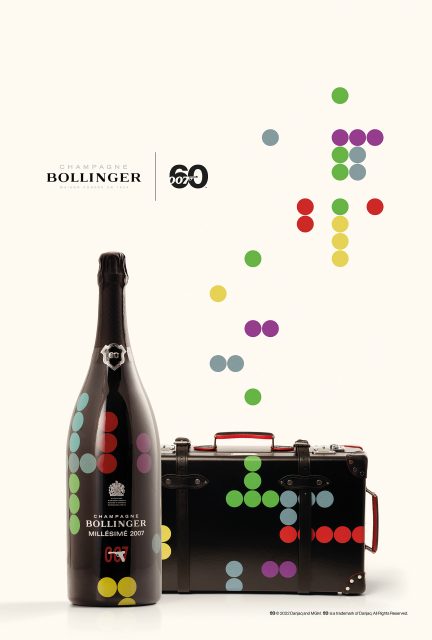 This year marks 60 years of the James Bond films, and Champagne Bollinger is marking the anniversary in some style, by releasing a limited range of Dr. No-inspired Cuvée from the 2007 vintage.

Just 25 Jeroboams have been released – one to mark each of the 25 Bond films that span its 60-year history.

The wine for this prestige Cuvée has been vinified in wooden barrels, before being aged in the Champagne Bollinger cellars for 14 years.

According to Champagne Bollinger, the resulting fizz offers an appealing contrast between intense, spicy aromas and notes of fruit, brioche and honey.

Each Jeroboam is presented in a special case, numbered 001- 025. The the 26” 2-wheel trolley case features the bold and striking Dr. No-inspired artwork and the Jeroboam is secured in the case with a precise cut-out to protect the bottle in transit.

“Each case displays internal and external silver plaques with the Champagne Bollinger and 007 60th anniversary logos, finished with a luggage tag”, Bollinger said in a press release.

The Macallan has also marked the 60th anniversary of the Bond films, with the launch of The Macallan James Bond 60th Anniversary Release.

The collection, which comprises six limited-edition 43.7% ABV bottles of single malt whisky encased in distinctive packaging, is a celebration of 007 and The Macallan as “modern innovators linked by their Scottish heritage”.