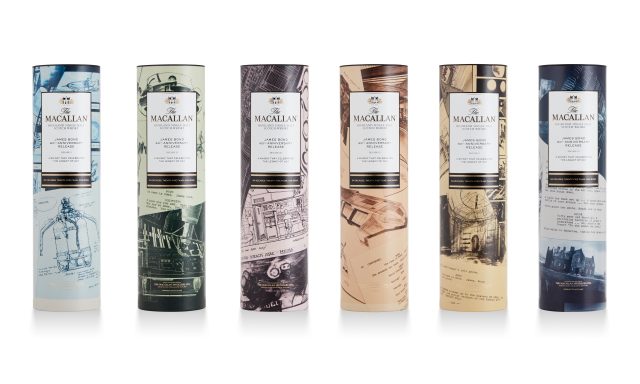 The collection, which comprises six limited-edition 43.7% ABV bottles of single malt whisky encased in distinctive packaging, is a celebration of 007 and The Macallan as “modern innovators linked by their Scottish heritage”.

Speaking to the drinks business about the launch, Kirsteen Campbell, master whisky maker for The Macallan, said: “The Macallan James Bond Anniversary Release single malt whisky is a timeless and graceful spirit balanced by remarkable strength and depth of character. Like the character of James Bond, it is complex and exudes a sense of style and maturity that has evolved over the years. On first impression there is a gentleness and elegance on the nose, but on further exploration, there are layers of flavour and depth to discover.”

The company reminded whisky collectors that even though the James Bond character’s roots are unmistakably British, his heritage is Scottish since he was born to a Scottish father, Andrew Bond from Glencoe and a Swiss mother, Monique Delacroix from the Canton de Vaud, as well as spending much of his childhood at Skyfall Lodge – his family’s Scottish Estate in Glencoe.

In recent years, the distiller also highlighted how The Macallan has become James Bond’s whisky of choice, reflecting his appreciation for the finer things in life, noting that they have shared many moments together on screen, including in Skyfall when James Bond drinks The Macallan Fine & Rare 1962 as an ode to the 50th anniversary.

Jaume Ferras, global creative director for The Macallan, added: “This October, James Bond will celebrate its 60th anniversary, making it the longest running and one of the most loved franchises in the world of entertainment, comprising 25 films over six decades and six lead actors over time. The Macallan is James Bond’s whisky of choice and as two renowned global brands, we share many synergies, most notably as modern innovators linked by our Scottish heritage.”

The Macallan James Bond 60th Anniversary Release will retail at US$800 (£600) and will be available from The Macallan online shop, The Macallan Estate Boutique,global travel retail and in premium and specialist retailers and bars in countries around the world from September 2022.