Wine growers in the village of Melampes, Crete, have launched a funding campaign to ameliorate the fallout of wildfires which have devastated the area, destroying 90% of local pre-phylloxera vines.

The end of July was a grave period for the farmers of Melampes in Crete, as they watched wildfires ravage their pre-phylloxera vines.

News of the tragedy spread with the help of Christos Fatouros, whose essay on the Cretan region was submitted to Jancis Robinson’s Wine Writing Competition 2022, and published last Wednesday alongside the devastating news of the wildfire’s impact.

Fatouros wrote in a message published alongside his original essay: “Nearly 80% of the pre phylloxera vines owned by villagers that Ms Malihin had brought together, were burned by wildfires, along with centuries old olive trees. The people of Melampes are farmers and are now facing a grim future.”

Indeed, according to Iliana Malihin, the winemaker of whom he speaks, approximately 10% of the 350 acres (141 hectares) of vines survived, even fewer than originally hoped.

Malihin told db she has been urging for government support, particularly in regard to preventive fire protection measures, since 2019, but to no avail.

“That’s something me and my team were asking for from 2019, and the locals many years before I made the winery, because their village was burned several times in the past,” she said.

The government has not responded, she said. “They gave no reason why they did this and why they left this world heritage site to become ashes.” 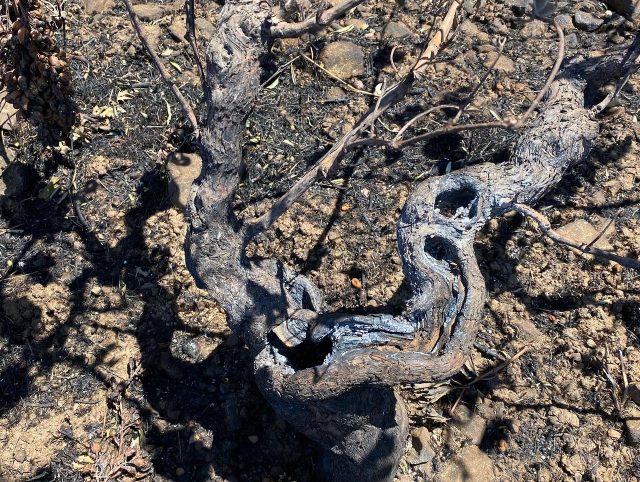 Malihin has previously attempted to apply for UNESCO world heritage site status, “but nothing except disaster happened”, she said.

Now that the fear of wildfires has been realised, Malihin and her colleagues have turned again to the Greek government for funding, both to rebuild the land and to support farmers whose livelihood has been dashed for a minimum of three to five years.

“At least these are what we need very quickly. The fire protection measures goes without saying,” she said.

Malihin is already working to deal with the fallout.

“I am already near my team supporting them in psychological and agricultural means,” she said.

“As we don’t have an irrigation system on the mountain we carry water every day with our cars in order to give to the vines and help the recovery. We are not going to replant ( I hope). We want to preserve the old pre-phylloxera vines. In October we will see if we have new bud breaks and if so, we will cut the trunk near the soil and create a new one, keeping the old root.”

To further assist the people of Melampes, Fatouros has organised a charity auction. “Personally I have a few vintages I was
saving for a special occasion,” he explained. “A few producers jumped aboard and offered from their produce.”

The process for the auction, which will take place via a Facebook livestream, is set to begin in September.

Access to the online funding page can be found here.