The first-ever direct container service connecting China and Scotland has set sale, transporting over one million bottles of whisky. 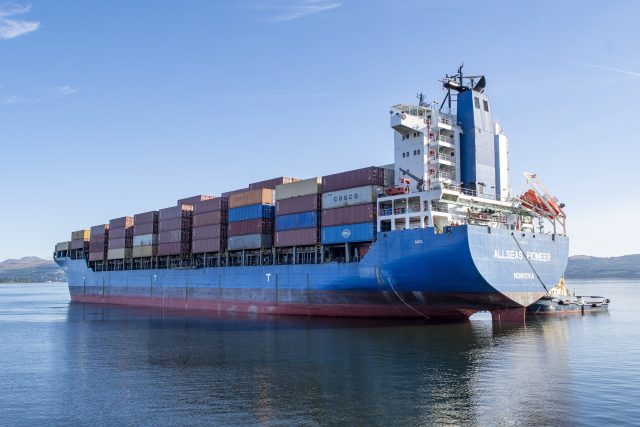 The new east and west bound freight route from Ningbo, China, arrived for the first time at Scotland’s deepest container terminal on Saturday morning at 9.35am.

The service transported imports including textiles, furniture, and toys for the Scottish market.

The vessel’s containers were loaded with tens of thousands of cases of whisky in a boost for the export market, and departed the Scottish terminal on the evening of 27 August on its route back to China.

David Milne, KC Group Shipping managing director, explained that the new trading link to China cuts through frustrating transhipment delays, “which is a massive boost for Scottish businesses, and can only help consumers in these difficult times”.

He said: “We’ll be toasting the success of over 1 million bottles of Scotch whisky being traded from the first vessel alone, and we’ll raise a glass to all the other businesses which will also benefit.”

Milne described the trading shipment as a “game changer for Scotland”. He added: “the uptake in the service is certainly proving that case, for Scotland’s furniture, pharmaceuticals, packaging and spirits sectors.”

Councillor Stephen McCabe, leader of Inverclyde Council, noted that the freight side of Greenock Ocean Terminal can often be overshadowed by the busy cruise ship schedule, but praised the new direct container service for its boost to the economy “locally, regionally and nationally”.

The direct sailings will significantly reduce transit times, compared to feeder services via continental Europe or other southern UK ports.

Three sailings will take place per month in each direction, calling at Ningbo, and the Chinese city of Shenzhen, before arriving in Greenock via its “sister” container terminal at the Port of Liverpool.