CO2 shortages lead to US brewers seeking nitrogen as an alternative

Carbon dioxide shortages have led to US brewers seeking ways to carbonate their beers, with nitrogen becoming a top alternative. 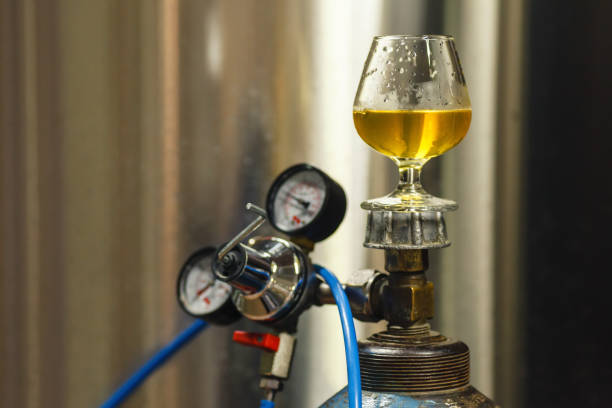 In the US, with contamination and a train line strike impacting carbon dioxide supply, breweries are eyeing differing methods of carbonation. However, despite many breweries being able to create a portion of carbon dioxide during the fermentation process, whether the capture and production of enough of it is scalable is becoming cause for concern.

CO2 shortages are causing havoc in the drinks industry with soaring prices meaning sites are having to halt production. According to the Brewers Association, the trade organisation representing small and independent brewers in the US, because if shortages, carbon dioxide suppliers have increased prices by about 25% taking full advantage of reduced supply and, as a result, more breweries are turning to nitrogen for many of their processes.

Lone Oak Farm Brewing Company co-owner Chris Miller told local sources: “We would still be able to operate because it [C02] is a natural byproduct of brewing. However, the pace at which we’re able to produce would be greatly hampered.”

To avoid issues, Lone Oak Farm is not just using what’s created through fermentation but is also is reusing the carbon dioxide from its finished beer, revealing that is has already begun using a blend of carbon dioxide and nitrogen for all of the beer served in its own tap room.

Miller explained how the move could become a way to burst the trend for overtly carbonated beers and help the industry move towards something a little more soft and gentle on the palate – essentially causing a new trend to emerge from the issue. He stated: “When something is super carbonated, it’s like a soda that almost burns the back of your throat” but insisted that “nitrogen helps mellow that out a little bit and makes it a unique blend”.

Miller also indicated that the brewery’s alternative methods were actually more environmentally friendly than buying in C02 and that the forced decision to adapt actually fitted in with its “ground to glass” ethos that is also echoed by the brewer growing its own barley before also malting it on site.

Miller said: “It’s kind of like farming. You can’t worry about the weather. You just have to plant when the sun is shining. So we’re gonna keep up doing the best we can.”

In response to the demand for CO2 across the industry, several other breweries in the US have admitted to growing concerns over the shortages and are looking at ways to mitigate issues further down the line.

For Denizens Brewing Company the situation has become challenging and the brewer revealed that it has been difficult to get tanks filled and, as a result, is now paying an extra surcharge for alternative sourcing.

According to the DC Brewer’s Guild the shortage is being monitored, but brewers across the US are reaching out further and there is reportedly now an outcry for understanding, support or shared tips on the best course of action.

For instance, Urban South Brewery is in trying to navigate the issue by staying in daily communication with suppliers, but this is not without its challenges.

Urban South Brewery owner Jacob Landry said: “I’m in daily texts, communication with my supplier. This spike is having a big impact on our bottom line. Our supplier is trying to source it wherever they can. We can’t get the quality we need out of our normal supply lines.”