The Champenois have reacted quickly to the changing market and some of the side effects that climate warming is having on grape growing in the appellation, announcing sweeping reforms to the way in which the reserve system operates. 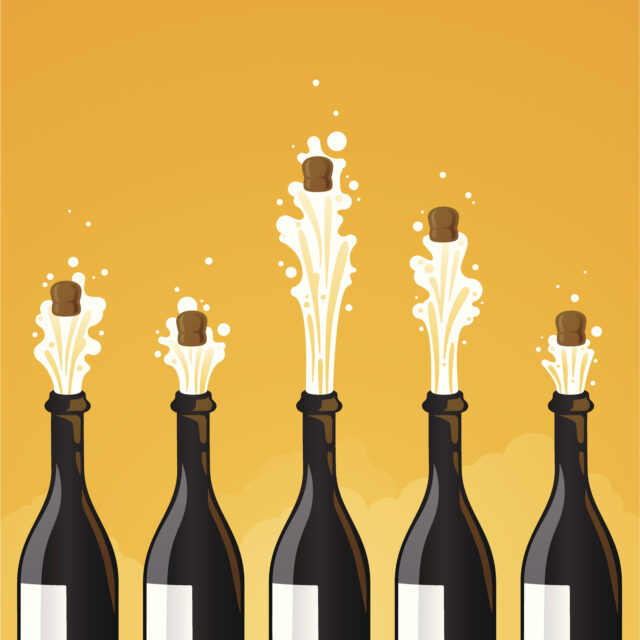 Aimed squarely at avoiding the peaks and troughs of supply and demand, bought sharply into focus by the last two disparate harvests in Champagne, the change should greatly reduce the likelihood of large volumes of healthy, good quality grapes hanging unpicked on the vines. This is precisely what happened in 2020, when fears that demand for Champagne would plummet as a consequence of the Covid pandemic, resulted in the maximum yield for that harvest being set at the low level of 8,000kgs/ha (equivalent to around 231m bottles of champagne) when the agronomic yield available was around the 12,000kgs/ha mark, some 115m bottles more, and the sanitary condition and quality of the grapes was high.

This error of judgement by the Champenois, as most admit it was in retrospect, was amplified by demand for Champagne booming in lockdown and the following 2021 harvest being pretty disastrous in terms of the volume produced, as a result of a very difficult growing season with extremes of weather including mini-tornados, hail, severe frosts, torrential rain and subsequently, widespread disease issues.

While the Champenois can’t put the clock back and gather in more of that wasted 2020 harvest, they are allowing grape growers to make up for any shortfall they experienced in 2021 — some Marne Valley based producers had virtually no crop at all – in the next three harvests from 2022-2024. And this change to the mechanics of just how the reserve operates will soon be incorporated into the Cahier des charges (the rules governing the production of Champagne) and involves creating a ‘deferred release’ of the reserve.

Under these new regulations, when you cannot make up for the loss of available yield for one harvest because your reserve is either zero or not sufficient, the missing part will automatilly be released from the reserve as soon as you can reconstitute that reserve, totally or partly. If this is not possible the following year, at the next harvest (either because there is not extra wine beyond the permitted usable yield or because there is not enough), the missing part will be released the year after, and it is possible to carry this ‘credit’ over for three harvests after the initial short harvest.

For the 2021 harvest when the maximum “commercialisable” yield was set at 10,000kgs/ha (just under 290m bottles) in fact grape growers across the appellation only picked on average 7,274 kgs/ha (equivalent to just under 210m bottles). To simplify this if we take as an example a grape grower who reached a yield of 7,000kgs/ha in 2021 and so was 3,000kgs/ha short of what they could bottle from that harvest, their first option is to take that 3,000kgs/ha out of their own reserve to get to the maximum allowed yield of 10,000kgs/ha from 1st February 2022. This is something which they were allowed to do under the previous rules.

However, under the new regulations, if they only had say 2,000kgs/ha in their reserve, they would be able to make up this 1,000kgs/ha deficit from the short 2021 harvest by reconstituting their personal reserve in any of the next three harvests of 2022, 2023 and 2024. The equivalent amount to their shortfall, put into this reserve would now be automatically released from 1st February in the year after the harvest it was picked from. So if they can do this in the soon to start 2022 harvest, the wine will be available for them to use in February 2023.

This new mechanism is aimed at helping Champagne grape growers immediately begin to rebuild their reserves, widely depleted as a result of drawing down on these reserves to supplement the low yield achieved in the weather impacted 2021 harvest.

The average level of the reserve held by grape growers across the appellation has dropped from 7,407kgs/ha, as at July 2021 prior to the 2021 harvest to just 4,596 kg/ha currently, just before the start of the 2022 harvest. However, with the maximum permitted commercialisable yield for 2022 set at 12,000kgs/ha, the good news is that currently the estimated agronomic yield is around 14,500kgs/ha. Therefore grape growers will be able to start rebuilding their reserves, as long as there are no disasters between now and the last week of August when the harvest is expected to begin.

Providing their current reserve is at or below 4,500kgs/ha, they could in theory put up to a maximum of 3,500kgs/ha into their reserve after the 2022 harvest, if they manage to pick the maximum overall yield that is generally allowed in Champagne, which is 15,500kgs/ha. Then from 1 Febraury 2023, they will be automatically allowed to release and use the amount of wine they were short of from the 2021 harvest, providing the combination of the yield they reached plus their reserve did not permit them to reach the allowable commercial yield for 2021 of 10,000kgs/ha.

Because this new system, which will be managed by the Comité Champagne, is seen as a very good solution to the problem of ironing out the natural peaks and troughs of production in Champagne in the longer term too, the Comité decided there was no need to raise the overall maximum volume of the individual reserve from 8,000 to 10,000kgs/ha, as had been widely discussed and considered.