A one-off Napa Cabernet blend comprising equal parts of the best wines from four of California’s most famous female winemakers is to be offered to UK buyers today.

Being offered to the trade today for £1,600 IBD for six 75cl bottles, just 240 bottles were made by the four winemakers, before being put up for auction at last year’s Premiere Napa Valley Auction, which raises funds for the region.

Due to Covid-related restrictions, for the first time in the auction’s 25-year history, the lots were made available online, allowing a greater involvement from overseas bidders – an opportunity that British buyers appear to have relished.

While 140 of the 149 lots in the annual auction were sold domestically, the top two most expensive lots, and three of the top six, were snapped up by the UK trade, with the priciest – a 60-bottle lot of Shafer Vineyards Sunspot Vineyard Cabernet Sauvignon – bought by Harrods for US$110,000, or $1833 a bottle.

However, it was the next highest lot that is being offered to the UK trade today, having been bought by Pol Roger Portfolio, which represents Champagne Pol Roger in the UK, along with a number of other producers, including several prominent Napa brands, including Gallica, whose wines were included in the aforementioned blend.

Indeed, it was the In Concert bottling that was acquired by the UK business for $65,000, giving Pol Roger Portfolio 240 bottles of the one-off wine, which was Lot number 23.

Explaining the reason for buying the lot, Will Dennison, who is head of fine wine at Pol Roger Portfolio, said “In Concert jumped out at us,” before noting that it represents the first ever blended lot from the Premiere Napa Valley Auction, while bringing together “four bastions of Napa Valley with wines from winery, St. Helena, Oakville, Diamond Mountain and Spring Mountain.”

When db spoke to three of the four winemakers who joined forces to create this unique blend, we were told that these figures had never collaborated before on a winemaking project.

During a breakfast meeting in London last week, Rosemary Cakebread – the the 2021 chair of the auction – explained the rationale behind the wine.

“We were in our respective bunkers – it was the middle of lockdown – and we were all friends, and we wanted to have a lot that was collaborative, we were hankering after a sense of community,” she said.

But it wasn’t easy to create the wine. Cathy Corison recalled, “Logistically it was a challenge, and we had to ship samples around the world, because Diana [who is married to Jeremy Seysses of Domaine Dujac] lives in Burgundy.”

Although each winery contributed the same amount of wine to the blend, choosing from their cellars “what we liked the most”, it took “two rounds” to get the final result, said Corison, adding, “We had to figure out which wines played together best”.

When they heard that a British business had bought In Concert, Cakebread said that they were both “surprised” and “delighted”, as well as extremely pleased to see that the blend had fetched “more than we expected”.

The blend was also made to promote the benefits of working together as a wine region, explained Cakebread, who told db, “You can’t do farm working without a community, and particularly in the light of the fires in 2107 and 2020, when collaboration was really important; you don’t survive as single satellites orbiting around.”

Speaking about the 2019 vintage, on which the blend is based, Snowdown-Seysses said that it didn’t yield particularly tannic wines – the vines had received plenty of water at the start of the growing season – before describing the Cabernets as having plenty of aromatic drive.

Corison concurred, adding, “And we had good acidity, there is a nice energy to the wines; they are more approachable than the 2018s.”

As for the end result, Corsion said that making it was like completing a puzzle, and, despite the challenges of In Concert’s creation, told db that “it is better than the sum of its parts.”

Antonio Galloni from Vinous Media awarded the wine 98/100, describing it as follows:

The 2019 Cabernet Sauvignon Auction 25 – Lot 23 is a one-off charity wine blended by Rosemary Cakebread, Cathy Corison, Dawnine Dyer and Diana Snowden for Premiere Napa Valley. It is a positively riveting wine. I don’t use those words lightly. The purity of the flavors is just striking. Dark red/purplish berry fruit, graphite, lavender, sage and mint all soar out of the glass in a Cabernet that marries Napa Valley opulence with a classic sense of structure. Sadly, there are just twenty cases, all of them headed to London. Readers lucky enough to find a bottle or two are in for a real treat. 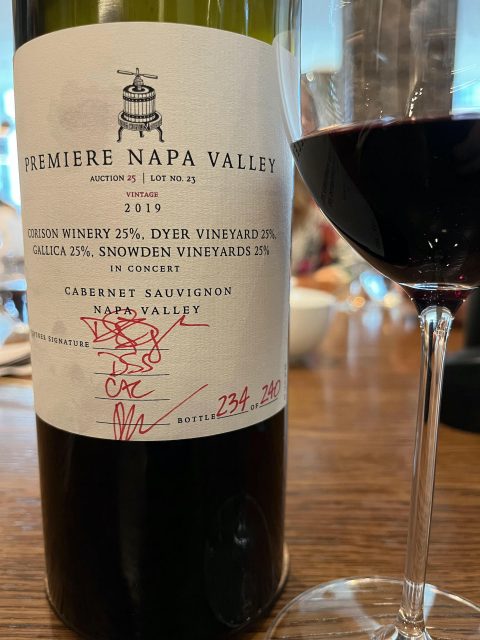 For more on the winemakers, see notes below from Pol Roger Portfolio: