A bottle of Champagne signed by Prime Minister Boris Johnson and auctioned at a charity fundraiser has stirred up controversy due to the listing making light of “Partygate”. 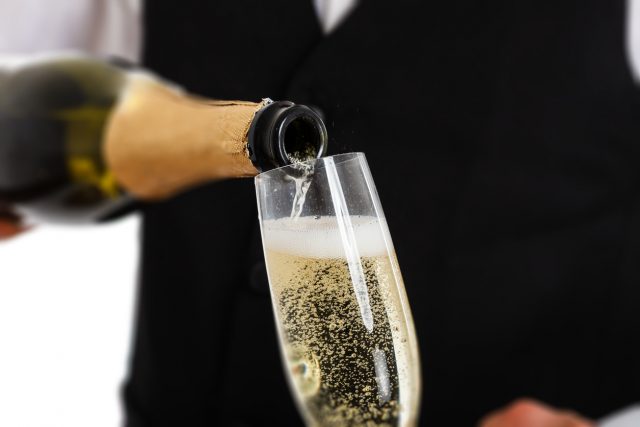 The item was donated by Conservative Party co-chairman and MP for Hertsmere Oliver Dowden to the Hertfordshire Community Foundation charity auction held on 12 May at Harry Potter Wizarding World. The caption for the listing read: “A bottle of Champagne signed by Boris. Hugely valuable as a souvenir of partygate and the exemplary behaviour and morality of our dear leader!”

The story broke when restaurant critic Jay Rayner shared a photograph of the auction listing on his Twitter feed. He later mentioned that a spokesperson for the Conservative Party had been in touch to state that Dowden did not write the caption. Precisely how Rayner obtained the photograph is unclear. 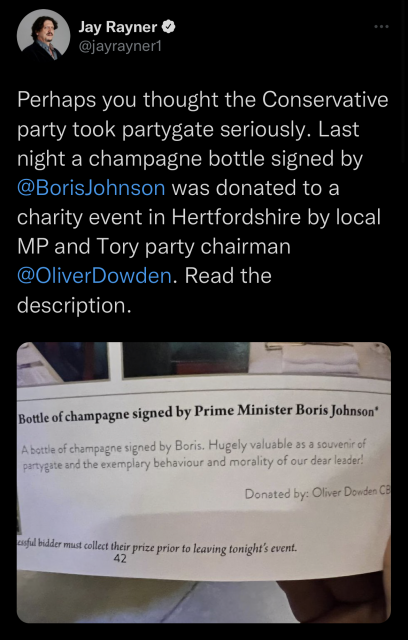 Rayner has since deleted the tweets due to responses “clogging [his] time line”, and it has also emerged that the jokey caption was written by someone working at the charity. Despite this, the response on social media has been damning:

So it looks like that Champagne thing isn’t fake, but it was written as a joke by the charity auction person rather than Oliver Dowden. I still think it’s pretty tin-eared to be donating signed bottles of Champagne in the era of Partygate but I’ve deleted my other post about it.

Hertfordshire Community Foundation has issued an apology for any offence the joke may have caused:

Statement from HCF about our fundraising event last night: This item was donated in good faith several months ago as part of a charity auction raising funds to support some of the county’s most vulnerable residents. The description was not drafted or seen by MP Oliver Dowden

Dowden has remained loyal to the Prime Minister throughout the unfolding scandal surrounding Downing Street parties held during lockdown. Though there are those who have condemned the joke as being in poor taste, it seems many have interpreted the irony-laden caption in bad faith, rather than as a satirical swipe against the government.

What cannot be denied is that the incident has overshadowed the rest of the auction, and the causes which the money has been raised for.

db has reached out to the charity find out the winning bid for the item, as well as the producer and vintage of the Champagne itself. The total amount raised is expected to be announced later today (Monday, 16 May).

MPs have been getting in to hot water over drinks on both sides of the House recently. Sir Keir Starmer has pledged to resign as Labour leader if fined for drinking beer at a supposed “work event” during lockdown last year.