Stoli vodka makes big statement regarding its stance on Ukraine

Having recently changed its name from Stolichnaya to Stoli to distance itself from its former Russian ties, the vodka brand has unveiled a limited edition bottle, with all proceeds going towards helping Ukraine refugees. 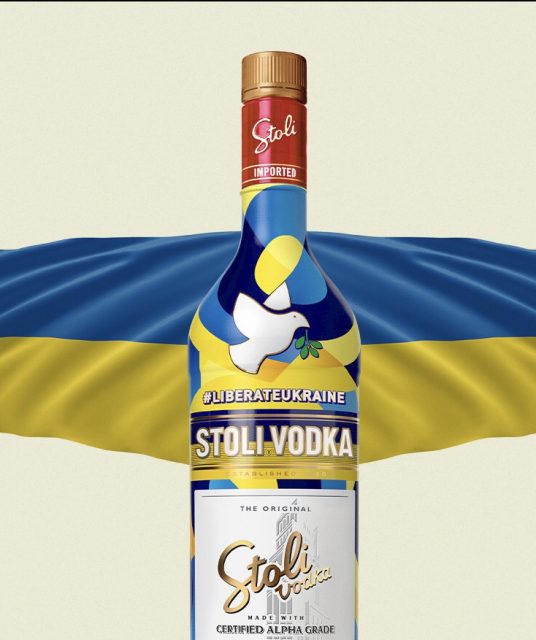 Stoli vodka has released a limited edition bottle adorned in the blue and yellow colours of Ukraine’s national flag, complete with a dove carrying an olive branch to symbolise peace. The wrapped bottle also features the prominent hashtag #liberateukraine.

All proceeds from the bottle will be donated to the non-profit World Central Kitchen (WCK), which provides fresh meals to Ukrainian refugees and those sheltering from the war in the country.

“As Ukrainians continue to suffer unimaginable losses, we are doing our small part to show unequivocal support,” said Stoli Group CEO Damian McKinney. “This Stoli vodka bottle will not only provide financial resources to Ukraine but is also a symbol of solidarity.”

The packaging move follows strident efforts by the vodka brand to distance itself from its Russian roots, beginning with changing its name in March 2022 from Stolichnaya to Stoli everywhere the spirit is sold, apart from in Russia.

More cynical consumers may say that with shops and bars removing Russian vodka from shelves and publicly pouring it down the drain in protest against the war, Stoli’s strategy could have more to do with protecting its profits rather than its humanitarian concerns. Not to mention the 35% tariff hikes imposed on Russian vodka by the UK government. However, the brand’s founder Yuri Shefler has made clear his “vehement position” against Putin’s invasion of Ukraine.

Stoli has been manufactured in Latvia since 2000, when Russian billionaire Shefler was exiled from the country for expressing opposition to Russian president Vladimir Putin.

The group may also be seeking to diversify away from vodka with the launch this month of Bourbon whisky Kentucky Owl The Wiseman. CEO McKinney tellingly described the release as “the beginning of the next chapter”.

“World Central Kitchen is grateful for Stoli support and commitment to our mission. They share our belief that a plate of food is more than just nourishment; its hope and a sign that someone cares,” said Jason Collis, WCK’s vice president of relief. “We appreciate Stoli’s quick movement to action and continued support, which will help us continue to serve meals as long as we are needed.”

So far WCK has served more than 6 million meals across Ukraine, Poland, Moldova, Hungary, Romania, Slovakia, and Spain. Working with local restaurants, caterers, and food trucks to provide nourishing meals at border crossings, shelters, and other refugee communities, WCK dishes up more than 300,000 meals daily in the region.

Tragically, WCK’s efforts were hit by a missile strike last week while providing food in the city of Kharkiv. The hit significantly damaged the relief kitchen where volunteers were preparing meals for Ukrainians remaining in the city. Four staff members were hospitalised.