Singapore Whisky bar The Chambers by Cask has launched its Mighty Cask series, inspired by Chinese literary classic, Romance of the Three Kingdoms. 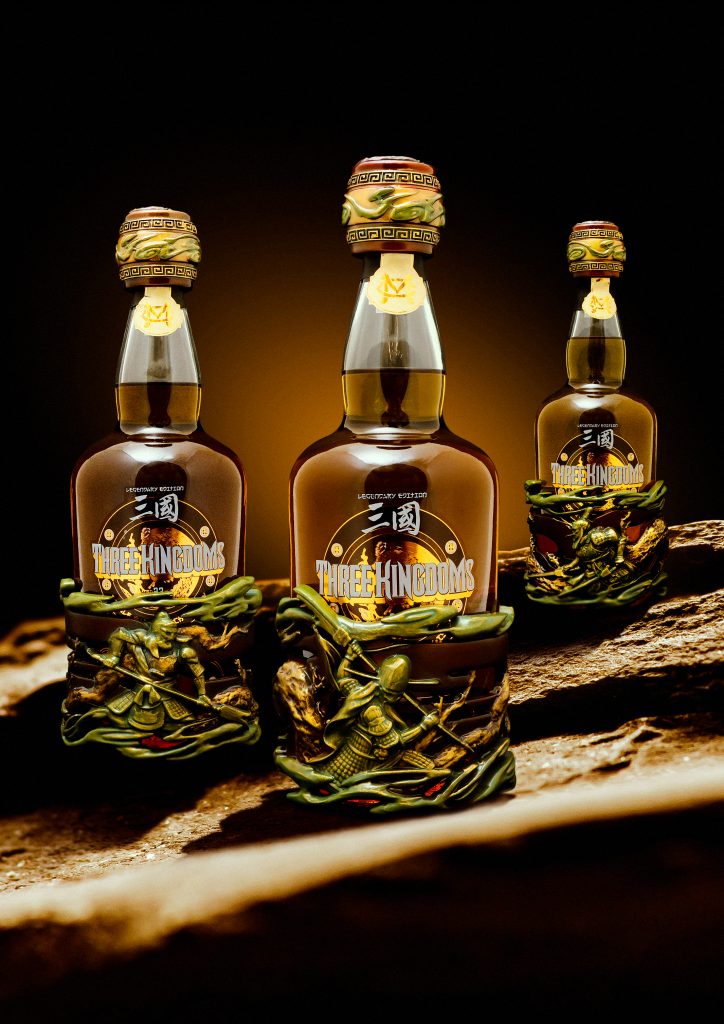 The Scotch whisky collection, made in collaboration with toy and art designer Mighty Jaxx, features a 20-year-old, a 22-year-old, and a 23-year-old single-malt whisky in three uniquely sculpted collectible bottles inspired by legendary characters from the Chinese literary tale, Romance of the Three Kingdoms (三國演義).

Accompanied by a limited drop of NFTs and a miniature series made specially for whisky connoisseurs, the collection aims to combine both physical and digital experiences along the journey.

The Mighty Cask single malt whiskies will be available in 700ml bottles, the designs of which were inspired by the personalities of the three generals in the book, each matching the profiles of the curated whiskies.

Each bottle shows its respective general, carrying their iconic weapon of choice, and has been designed in a way where if places side by side or stacked on top of each other, the bottles together vividly depict the three generals: Guan Yu, who represents the ideals of loyalty and righteousness, features on the 20-year-old Caperdonich; Liu Bei, who is characterised by benevolence, appears on the 22-year-old Glen Keith; and Zhang Fei, immortalised by his might in defeating an army of 10,000 soldiers, is depicted on the 23-year-old Glen Grant expression.

Collectors can authenticate their limited-edition bottles on the Mighty Jaxx mobile application and choose to acquire digital versions of the bottle designs in the form of NFTs.

Holders of the NFTs will get the chance to purchase a limited miniature series of the Mighty Cask selection in sets of three.

“We started The Chambers by Cask because of our shared appreciation for whisky. This collaboration with Mighty Jaxx along with their vision and expertise in future culture elevates the idea of whisky collecting into a new and exciting paradigm,” said David Lau, part of the founding team of The Chambers by Cask. “Mighty Cask not only expresses the beloved golden spirit as a unique and collectable art form, but also extends that experience into the digital space.”

Thomas Fernandez, also part of the founding team said: “The story of the three generals articulates the spirit of entrepreneurship perfectly. As the co-chairman of the ASME/Rotary Club’s The Entrepreneur of the Year Award, I have seen many succeed by not just having a voracious appetite for learning and innovation, but through meaningful collaboration with others who they share a vision with. Mighty Cask is one of such collaborations and we look forward to bringing the same spirit of camaraderie with whisky lovers in Singapore and around the world.”

The Mighty Cask collection will be made available for purchase at The Chambers by Cask from 23 March 2022, while stocks last.

Each set of all three designs will retail at a launch price of SGD$4,888, with standard retail price at SGD$5,888.

From 23 March 2022, the first 138 customers who authenticate and mint the digital collectible will also be invited to purchase a set of three miniature Mighty Cask for SGD$188.