Ye Olde Fighting Cocks in St. Albans, one of a handful of UK pubs that claims to be the oldest, went into administration last month. 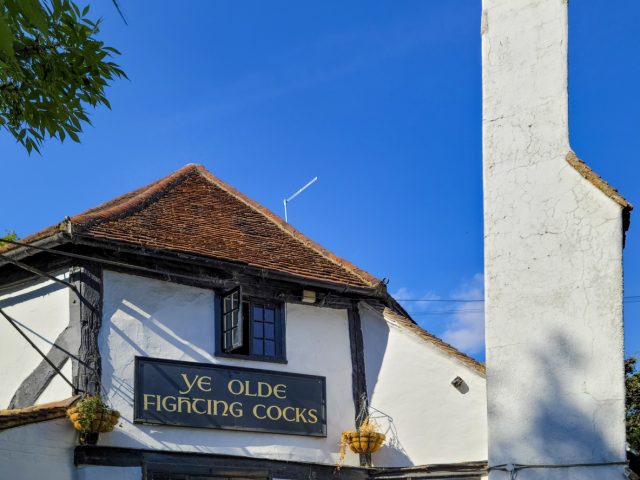 Beer has supposedly been served on/around the site since 793 AD, the year the Vikings raided Lindisfarne. During the English Civil War, Oliver Cromwell himself stayed a night at the pub – even a devout puritan could enjoy a refreshing pint after a long day of fighting. However, the closure of Ye Olde Fighting Cocks came about not due to invading hordes or political turmoil, but because of “unprecedented” trading conditions resulting from the lockdowns over the last two years. Former landlord Christo Tofalli had run the pub for more than a decade and described the closure as “heartbreaking”.

But now YOFC is set to return under new leadership. Reopening on Monday April 4, former staff are taking over the lease for the pub from owners Mitchells & Butlers. Former manager Martin Robinson is the new landlord, co-owning the site with Sam Walker and head chef Ian Baulsh. With plans for an outdoor barbecue this Summer, it seems PETA’s calls for the pub to be re-named and serve plant-based food have not been heeded, though there will be some vegan options.

St. Albans has a reputation for being the pub capital of the UK: CAMRA has its headquarters in the city and it has been claimed that there are more pubs per square mile in the former Roman settlement than anywhere else in the UK. However, the rate of pub closures has left St. Albans’ claim to the title in dispute.

Daisy Cooper MP has been a vocal supporter of saving the city’s watering holes, and has championed YOFC when it first had to reduce opening hours before the pandemic:

Hoping to get called to speak in the MP debate on the “taxation of beer and pubs” @savestapubs @FightingCocksSA 🍺💪 pic.twitter.com/7UzwXecT8C

Though the representative for St. Albans is yet to respond to the reopening, Tofalli has in a statement shared on Facebook. He said he knew “100%” that the new management “will put their heart and soul” into keeping the pub “at the centre of the St. Albans community” and that he hoped to drop by and enjoy “a cheeky beer the other side of the bar”.