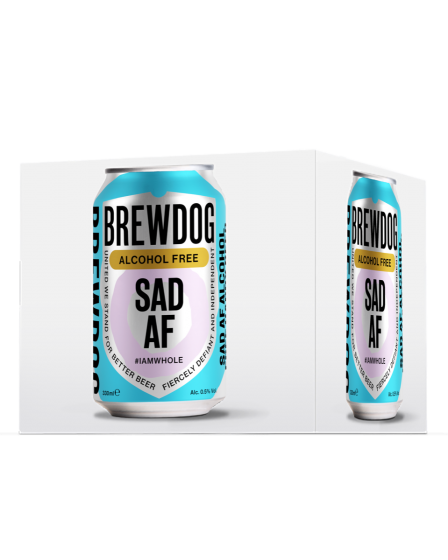 The new alcohol-free brew, named SAD AF, launches as part of a wider mental health campaign urging men to speak to family and friends about depression and anxiety. 100% of the profits will be donated to mental health research.

Stephens has created a spoken word poem to go along with the campaign, which launched alongside the beer.

The video also cites UK mental health figures to raise awareness of SAD and its effects, and encourages men to use the new brew as a means of communicating with those close to them. More than four in five men are more likely to open up to friends and family over a drink, according to the campaign.

Other celebrities can also be seen in the video – including Danny Dyer, Mo Farah, Seann Walsh, drag queen bimini bon boulash and Love Island star Dr Alex George – holding up a sad face drawn on the palm of their hand.

A new study of 1,000 people experiencing mental health challenges released this week revealed that 85% believe January is the worst month for their mental health, with 41% identifying the second week of the month as the lowest point of the year.

With Covid-19, and social isolation still at large 64% of sufferers say that January 2022 will hit harder on their mental health than in any previous years.

The new collaboration has had mixed reviews online. Many have praised the campaign online, with one Twitter user commenting “Important. Too many of us know a bloke who has taken their own life, even though they seemed fine on the outside.” Another called SAD AF “quite possibly the best collaboration BrewDog have ever done”.

But some are less than impressed, with one Twitter user saying: “SAD AS F***? I’m bipolar, and I endured a horrible childhood filled with war trauma and abuse. What I find SAD AS F*** is this poorly thought slogan.”