The Liv-ex 100 index has hit an all time high in October – surpassing the previous peak set in 2011, proving the health of the market, it said. 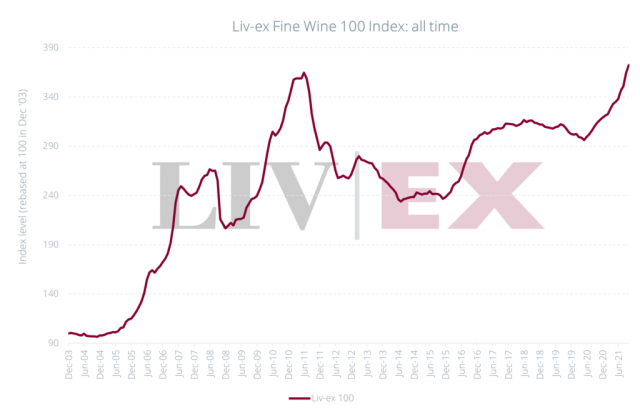 The index, which tracks the price performance of the 100 most sought-after fine wines, has consistently risen over the last 17 months – the longest bullish period in the fine wine market to date.

Strong trading in September saw the market return to its previous peak for the first time since 2011, and the strong price performance of high-end Burgundy helped push the index upwards during October.

In its first two decades, it has increased 272.4%, survived three global financial crisis and returned more than the S&P 500.

In a report, Liv-ex said that the performance of high-end Burgundy had returned in full force in 2021 after a lull in 2020.

Burgundy prices slowed in 2020, but have risen sharply again in 2021. The region has been hard hit by extreme weather including spring hail and frosts in 2021, with the result that yields are likely to be half to those last year. Older vintages on the secondary market have seen increased demand over  the year and prices have consequently risen.

There have also been a record number of wines trading on the secondary market, reaching an all time high. The year to date has seen 10,603 different wines and spirits traded on the global marketplace – a rise of 2.4% on the whole of 2020, and almost seven times higher than it was a decade ago.

The continued expansion of the fine wine market has seen non-traditional wine regions gaining momentum, Liv-ex said, often at the expense of the established forces that shaped the market in its first decades. Wines from Spain’s Balearic Islands, Aconcagua in Chile, the Palatinate in Germany, and Calabria and Campania in Italy are now trading on the secondary market, while the UK has doubled the number of wines in the last 12 months, from 14 to 32.  Atlthough these are far smaller in number, they demonstrate the fast growth of smaller regions.

Meanwhile, Burgundy remained the region with the highest number of wines trading, as well as seeing the biggest increase in wines trading year-to-date. Liv-ex data showed that buyers lhave increasingly sought value among the price tiers, hich has enabled new domains to enter the market, broadening the region’s offering overall.