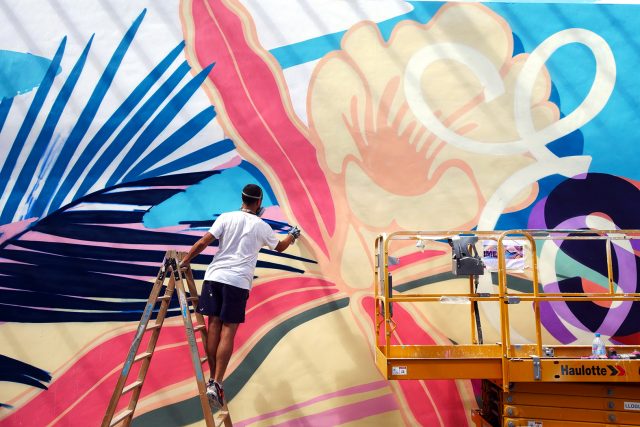 Le Versant Rosé 2020 is made from single vineyard selections of Grenache grown on clay-limestone marl soils on north-facing hillsides the IGP Pays d’Oc.

According to its makers, the pale pink pairs well with a myriad of dishes, including white meats, tandoori chicken, monkfish tagine and even crumble.

French street artist Nerone has previously created designs for the likes of Puma, Jaguar and Land Rover. Known for his abstract flower patterning, his works can be found everywhere from Paris and New York to Bangkok, Berlin and Seoul.

In addition to Le Versant, Foncalieu makes a number of other rosé expressions from Syrah, Cabernet and Merlot.

“The 4,800 hectares farmed by our 794 member growers cover a variety of vineyard sites – a diversity that forms the linchpin of Languedoc’s success – from Carcassonne to Béziers, the Minervois to the Corbières and over to the coast”, said Foncalieu’s director of winemaking, Nathalie Estribeau.

Estribeau uses techniques like lees ageing, co-fermenting grape varieties and barrel ageing to add greater complexity and longevity to the rosés she makes.

Foncalieu is one of southern France’s leading rosé specialists, which accounts for over 30% of its total production, with predicted annual sales of 10 million bottles by 2025.

Sustainability is also a key pillar of the company’s ethos, with 165 hectares currently farmed organically and 180 hectares in the conversion phase. All of the wines made by Foncalieu are vegan friendly.