The brands and trends shaping the low- and no-alcohol category

While overall alcohol consumption is expected to have declined in 2020 the low- and no-alcohol market is continuing to expand, with consumption expected to grow 31% by 2024, according to the IWSR. 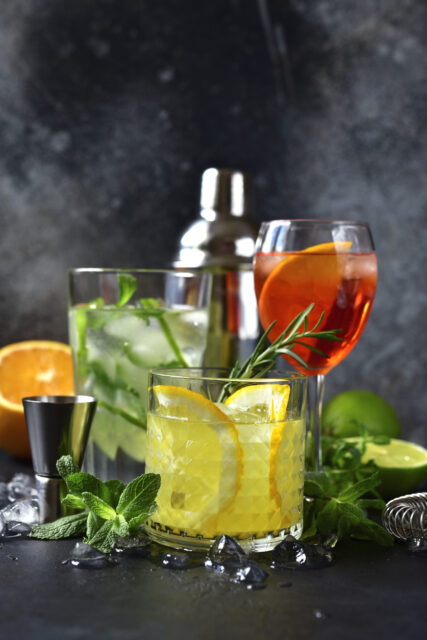 Globally, the low/no alcohol market is expected to grow by 34% in volume over the same period. This compares to overall alcohol volume consumption, which is expected to have declined by 10% in 2020, says the IWSR, as the impact of the pandemic unfolds.

“Brand owners will have an important role to play in the future development of no- and low alcohol, as increasing the breadth of products available to consumers and their price points will support category growth and broaden its appeal.”

While there’s still a long way to go before a non-alcoholic wine can match up to the real deal, the motivations behind consumer choices are changing and larger swathes of the adult population are seeking out lower alcohol serves on a more regular basis. A recent study by the Portman Group found that 24% of British drinkers are keen to cut back on booze, rising to nearly a third (31%) for the 18-24 age bracket, dubbed ‘Generation Sensible’.

While many might be drinking more at home, a desire to reduce alcohol intake among a growing number of clean drinking, health conscious consumers is driving demand for more innovative non alcoholic options, and the industry is delivering.

Last year renowned Italian mixologist Simone Caporale, formerly of Artesian at The Langham, launched a non-alcoholic ‘spirit’ that mimics the flavour and texture of alcohol. Called Zeo, the brand is aimed at ‘sober curious’ consumers seeking a high quality alternative to alcohol and comes in two variants: Botanical Dry and Spiced Oak.

While countless other brands, including Diageo, William Grant & Sons and Martini, are launching products to tap into the growing NOLO market, with with beer, spirits and RTD’s, including hard seltzers, leading the charge.

Here, we take a look at the brands taking the NOLO market mainstream, and the trends that are shaping the category… 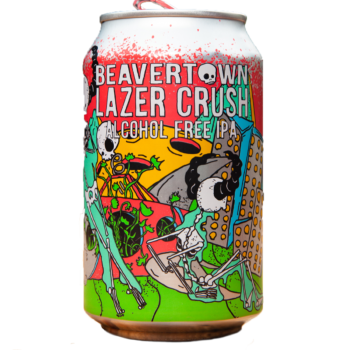 For some time beer has been considered the biggest success story of the low and no alcohol movement, with the process of brewing making it easier to replicated the flavours and aromas of their alcoholic counterparts. The category has also had time on its side, with research into lower alcohol brews further into its development than wine or spirits. According to the IWSR, the no/low beer and cider category now commands a 92% share of the total market, with the past few years seeing more and more big brewers throw their weight behind 0% beers on a larger scale.

In October 2020, Diageo unveiled an alcohol-free Guinness stout, made at Guinness’ St James Gate brewery in Dublin, that comes in at 0.0% ABV and contains 16 calories per 100ml. That means a full 440ml can contains just over 70 calories. It is a de-alcoholised beer, where the alcohol is removed through a cold filtration method. This compares to most mainstream low alcohol beers that are either cold filtered to remove the yeast and bacteria, or heat pasteurised to kill all yeast and bacteria, and hence halt the production of alcohol. But its launch was short-lived after Diageo was forced to recall the product in November over fears of microbial contamination.

But while increasingly larger brewers are shaping the category, smaller brands are working hard to carve a niche. “The segment is likely to become even more of a focus for smaller craft producers who are able to bring a diverse range of products to the market in future,” the IWSR said. Last year London-based craft brewer Beavertown launched its first ‘alcohol-free’ beer after reporting soaring sales of low ABV drinks during lockdown. Lazer Crush is a 0.3% IPA and contains just 83 calories per 330ml can. It followed the launch of Beavertown’s Nanobot, a lighter 2.8% ABV beer. 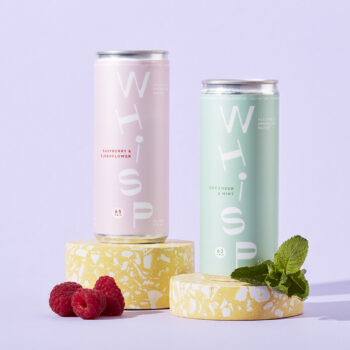 A flurry of health-conscious drinks entrepreneurs are capitalising on our urge to reduce alcohol consumption and live healthier lives, it seems, with the NOLO market a prime target for new product development.

Despite early anecdotal evidence suggesting that people were stockpiling alcohol and drinking more during lockdown (certainly at home), the reverse also appears to be true, with the pandemic highlighting “that moderation and wellness trends continue to resonate with consumers,” says the IWSR. “The low-and no-alcohol sector has remained resilient through the crisis, although growth of low- and no- spirits has been hampered by the absence of a fully functioning on-premise channel, seen as key to bringing the category closer to consumers.”

Made in Chelsea star Spencer Matthews’ launched his nolo brand, CleanCo, in 2019, and received a $2m boost from a US investment fund last year. Most recently we have seen the launch of Whisp, a British hard seltzer brand founded by personal trainer Harriet Cuming and marketed at the health-conscious crowd. Its Cucumber & Mint and Raspberry & Elderflower variants carry an ABV of 4% and just 66 calories a can. Marketed as vegan and gluten-free, with no added sugar, sweeteners or preservatives, it also contains milk thistle, said to help tackle inflammation and support a healthy liver.

More unconventional is Fungtn, which bills itself as the UK’s first ‘medicinal’ mushroom beer. Founded by mindful drinking consultant Zoe Henderson, the 0.5% ABV vegan and gluten free beer brand includes an IPA brewed with Lion’s Mane mushrooms; a Citra Beer brewed with Reishi mushrooms; and a lager brewed with Chaga mushrooms. According to Henderson, medicinal mushrooms, called myco adaptogens, are known for helping the body adapt to psychological stresses, restoring homeostasis and supporting the immune system and endocrine system.

Gordon’s launched its own juniper-led, alcohol-free ‘spirit’ made with the same botanicals as its London Dry Gin in December 2020, trading off its considerable brand awareness. “Gordon’s 0.0% is created by distilling the same botanicals used in Gordon’s London Dry Gin. These botanicals are individually immersed in water, heated and then distilled before being blended together to capture the essence of Gordon’s in a delicious alcohol-free alternative,” said Anita Robinson, marketing director at Diageo GB. “This special distillation process is a closely guarded secret, known only to a handful of people and we are incredibly proud to be bringing gin drinkers that juniper led taste they’re expecting from Gordon’s when they choose not to drink alcohol.” Other distilleries have created new non-alcoholic brands altogether, rather than a non-alcoholic version of an established brand.

Warner’s launched its 0% Botanic Garden Spirits in September, which includes Juniper Double Dry and Pink Berry variants and is made with natural botanicals, after three years of trials and experimentation. William Grant & Sons launched low ABV ‘spirit’ brand Atopia in 2019 with flavour variants including Spiced Citrus and Wild Blossom. Last summer ex-The Saturdays member Frankie Bridge came on board as its brand ambassador.

“The category that we pioneered is still in its infancy, and while it is growing quickly, new brands that enter help build and reinforce its significance to the consumer,” says Claire Warner, co-founder of Seedlip sister company Æcorn drinks, of the increasing competition within the NOLO category. “This, in turn, encourages retailers to invest in the category and further helps to establish the NA category as dynamic, diverse, and crucially, here to stay.” 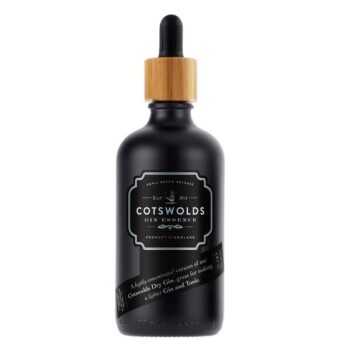 One of the more interesting innovations to have emerged in the past year is the use of concentrated, syrups and cordials, created to partner with non-alcoholic serves.

Cotswold Distillery has produced one of the most striking in its Cotswold Distillery Gin Essence. Rather than create a 70cl bottle of ‘spirit’ that mimics its gin, the team has instead developed a concentrated 46% ABV gin essence using the same botanicals as in its Cotswold Dry Gin. The result is a liquid that is 10x the concentration of a traditional bottle, meaning that you only need to add a few drops to your tonic to experience the same flavours of a traditional gin and tonic, with a fraction of the alcohol (90% less alcohol than a standard 50ml serve).

A 100ml bottle makes 20 G&Ts, with each 5ml serve of essence containing just 0.23 units of alcohol and 14 calories. Concentrated serves could prove to be a bigger trend going forward, while concentrated syrups are another area to watch, which complement non alcoholic ‘spirits’ and offer greater opportunities for experimentation.

Nonsuch Shrubs, founded way back in 2018, has developed a range of fruit and vinegar based syrups designed to be added to non-alcoholic and alcoholic serves to give greater depth and complexity. Simply add tonic water or soda water, or use to make a non-alcoholic cocktail. Nonsuch currently has four flavoured shrub syrups available: Caramelised Pineapple & Ginger, Wild Hedgerow & Rose, Bittersweet Apple & Cardamom and Blood Orange & Bitter Lemon. 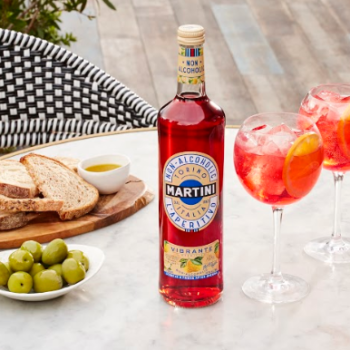 Shrubs are also the trend to watch for Ben Branson, founder of Seedlip, who predicts that the NOLO market will be all about savoury flavour development in the coming years. “We’ll see more savoury, sour and bitter options as people move away from sweetness. I think we’ll see more flavoured mixers and more adult flavour profiles. Look out for salt, smoke and shrubs to be in.”

Last year Seedlip and sister company Æcorn launched a bottled version of its NOgroni, made with equal parts Seedlip Spice 94, Æcorn Bitter and Æcorn Aromatic, playing into the savoury trend. Æcorn was the first to produce a range of distilled non-alcoholic aperitifs in 2019, with its Æcorn Bitter and Æcorn Aromatic now on the shelves in major supermarkets across the UK.

Following in its footsteps, Bacardi-owned wine brand Martini has launched a non-alcoholic alternative to its vermouths in 2020. The aperitifs are de-alcoholised and infused with a selection of sustainably sourced botanicals. There are two variants in the new range: Martini Non-Alcoholic Vibrante, made with Italian Bergamot, and Martini Non-Alcoholic Floreale, which “takes inspiration from the delicate sweetness of Roman Chamomile.”