A bottle of Irish whiskey has set a new world record for the highest price achieved for a maiden bottling sold at auction, selling for US$60,000 at a charity sale in Texas. 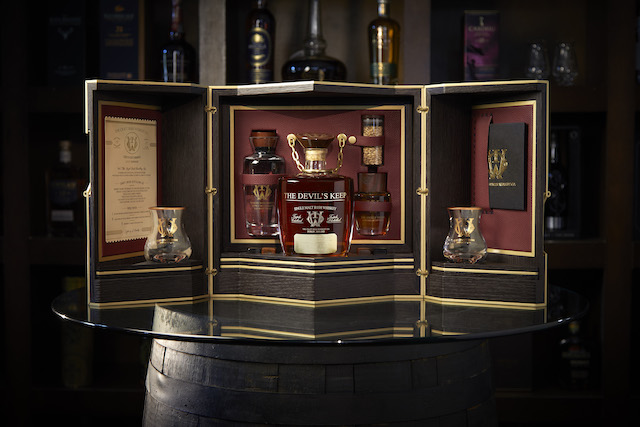 The bottle of ‘The Devil’s Keep’ from the Craft Irish Whiskey Co. was sold to Jim Crane, owner of the Major Leage Baseball team the Houston Astros, for the record-setting price.

The whiskey will be officially launched on 30 November and will be the oldest triple distilled Irish single malt released with just 333 bottles available worldwide.

Jay Bradley, Founder of Craft Irish Whiskey Co. commented: “With more than two years of hard toil, countless revisions and changes to bring The Devil’s Keep to life, it was very fitting to donate our first bottle to a cause that is so close to my heart. We’re also thrilled to be celebrating Ireland’s whiskey resurgence by officially launching the Devil’s Keep at the end of this month, which has been a crusade sparing no expense to source the rarest whiskey and the finest tawny port and virgin Hungarian oak barrels, to give the most sublime flavours – it truly is the culmination of our devotion, passion and craft.”

The proceeds of the sale of the bottle will go to a charity that supports children affected by serious illnesses. The charity was founded by Houston Astros player Carlos Correa and his wife. The distillery donated bottle number 17 to the sale. The Astros dedicated the team number to a young fan called Cameron Gooch who died of cancer aged just 10.

Jay Bradley’s own daughter was diagnosed with a rare form of cancer when she was just five months old, recovered, went into remission when she was five but battled through and is now 18.