Hybrid wine stores are set to flourish despite the higher costs caused by Covid-19 restrictions over the summer, according to Phil Innes of Birmingham-based Loki Wine, who is opening his third outlet later this month.

Speaking to the drinks business this week, Innes said the model was still the future for wine shops, despite the series of restrictions imposed since the first lockdown and the acceleration of online wine sales.

“I think the model is here to stay,” Innes told db. “We won’t be going through this forever and the hybrid model is really, really strong with that combination of both the wine shop and the bar. I always thought it was the future of where wine shops should be going and I don’t see this slowing it down that much at all.

Innes, who launched Loki Wine in Birmingham’s Great Western Arcade in 2012 followed by a second hybrid store in Edgbaston in 2018, is set to open his third outlet in Knowle village in Solihull in the next few weeks, on the site of a former flooring shop, auction room and off-license. According to papers submitted to planning, this would support ten jobs.

The new shop has been planned for a year, and although Innes initially pulled out following the onset of the pandemic, he subsequently decided to go ahead. 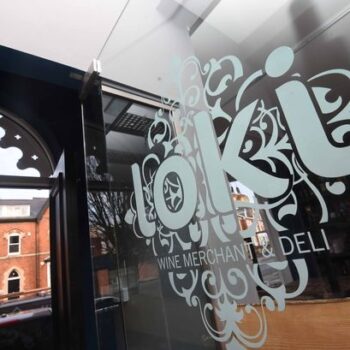 “That is a testament to how I think that hybrid model is going to succeed,” he added.

Although onlines sales have boomed during the pandemic and the team had conducted very successful online tastings, he argued that ecommerce  was not able to recreate the experience of bricks and mortar with the ability of well-trained staff to hand-sell wines.

“One of the things I really wanted to do was to build on the online side now, but I’m sure bricks and mortar and the high street will still be there. One of the cornerstone of Loki is that we hand sell every bottle  – even to our regulars who come in all the time – and you can’t do that online, you can’t get that experience.”

“I’m confident, especially in the more high end lines that people will want to come back to bricks and mortar. And the idea of launching now is that when this is all over – hopefully next year at some point – we will be in the prime position to take advantage of that.”

Innes admitted that prior to the second lockdown the easing of restrictions had made a significant difference – although it had incurred extra costs both in making the venue’s safe and complying with restrictions by adding table service.

“The way we’re set up here does give us mean people are spread out, so we didn’t have to reduce capacity too much – we took it down by about 30%. But doing table service adds such a significant amount of cost on to facilitate people drinking in and the concept of what we do here is trying to keep wine affordable for people so we just charge a small drink in free of £7 a bottle regardless of the price of the bottle and we apply the same charge with enomatics as well. So we don’t have tonnes of margin to play with to facilitate a lot of extra service.”

Stephen Finch of London-based wine hybrid shops/bar Vagabond argued that the introduction of mandatory table service, and customers being unable to use the wine dispensing machines rendered two key things of its business model “void”.

However, he too remains bullish about the future, arguing that certain fundamental human behaviour will persist.

“If there is a fundamental behaviour in this country, it is that people like to drink, that is not going to change,” he told db.

“Maybe more people will do more ecommerce and have wine subscriptions, but people are still going to go out and drink, still want to encounter new wines, and I don’t see that going away anytime soon. If anything, because hybrid model as economic advantages over pure play on either side of that hybrid, I’d say it would be advantageous to the hybrid than to the other pure plays.”

And this was reflected in Vagabond’s sales between July and September, particularly at its Paddington venue. “It’s right by the canal and has been one of our strongest performers,” Finch notes. Despite a slow start for Monument, which reopened in July, that too was “surprisingly strong at the weekends”.

Although Canary Wharf was shut during both lockdown and the team are putting all of its energies behind its newly launched e-commerce platform for the duration of the second lockdown Finch remains optimistic about the city.

“We believe that city office workers will come back, coronavirus will end, there’s a lot of talk about companies saying work from home indefinitely if you like, but I heard the same thing in the wake of 9/11. I was in New York and all these CFOs were saying they’d slash property expenses and be so much more profitable, then almost before you know it, everyone is talking about bringing people back [to the office]  in order to get more productivity.”

Interestingly, there was never a “public reckoning” on that U-turn. “There might be some people will have made that decisions that they don’t want to come into the office, they like their country idyll and some types of companies can support that, but a trading floor in a bank need to be in the same room,” he argues. “There’s a reason why Apple designed a big circular HQ in Cupertino – they designed it to have space for people to bump into people they wouldn’t normally be in contact with, so they can have these “serendipitous encounters”, as they call them. These have real value – and you do not get that over Zoom!”

“So I’m pretty bullish – it will take time, sure, but maybe nine months from now we will see a reasonably vibrant city again.”

One advantage of having an urban winery is that you retain the cycle of harvest, which is a much longer timeline and one that moves forward unaffected by lockdown.

“And even though 2020 was an absolutely sh*t year, we’re very confident that vintage 2020 is going to be an excellent year,” he concludes. “Silver vinis linings.”