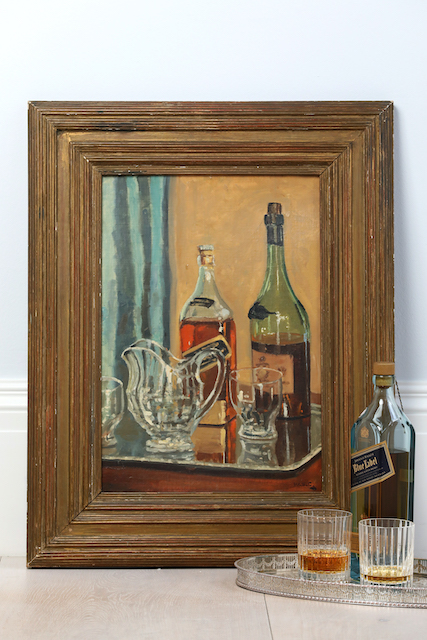 The painting was sold at a Modern & Post-War British Art sale at the auctioneer on 17 November and it quickly started a bidding war, it’s final hammer price being five times its pre-sale estimate of £150,000-250,000.

‘Jugs and Bottles’ was painted by the British statesman at Chartwell, his home in Kent where he often took friends and associates for lunch.

The painting depicts a bottle of Johnnie Walker Black Label which was one of his favourites, next to another bottle which might possibly be brandy, Sotheby’s noted, on a silver tray.

Churchill made a gift of the painting to US diplomat Averell Harriman in the 1940s, the latter being  keen art collector. Harriman spent the Second World War as a special envoy to Europe and then ambassador to the Soviet Union.

Incidentally, Harriman had an affair with Churchill’s daughter-in-law, Pamela, during the war and went on to marry her in 1971.

The painting first appeared at auction in 1997 and its final price yesterday ranks it as one of the most expensive of Churchill’s paintings ever sold.