A man stranded and struggling in the waters of Lake George found his prayers unexpectedly answered by a floating tiki bar full of Catholic priests earlier this month. 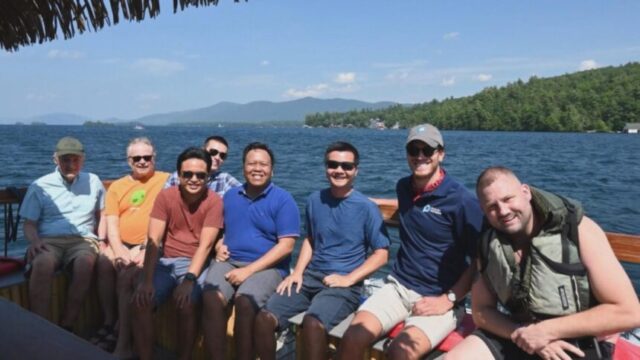 Jimmy Macdonald was kayaking on Lake George in New York state when he capsized, alone and far from the nearest shore.

Initially, although he could see passing boats, he thought he could manage and didn’t ask for help but after about 30 minutes, as he began to tire, the waters grew a little rougher and his ill-fitting life jacket began to slip over his head, he realised he was in trouble.

He later told local media: “I thought I was going to die. I was absolutely powerless and wished I had asked for help earlier. I was waving my hand and asked God to please help me.”

Then, in an incredible twist of fate (or perhaps divine intervention), a floating tiki bar full of Catholic priests and seminarians from St Jospeh’s Seminary in Washington DC passed by.

Macdonald was helped aboard by the priests who were out for a cruise as part of a religious retreat they were on in the local area – though whether or not they were enjoying a rum cocktail at the time was not recorded.

It was doubly ironic for Macdonald who has been sober for seven years and helps others with addiction recovery that the craft that came to his salvation should be a bar.

“How funny is it that I’ve been sober for seven years and I get saved by a tiki bar?” he said.

One of the seminarians who helped rescue him later told NBC Washington that the episode had been, “a movement of the holy spirit”.