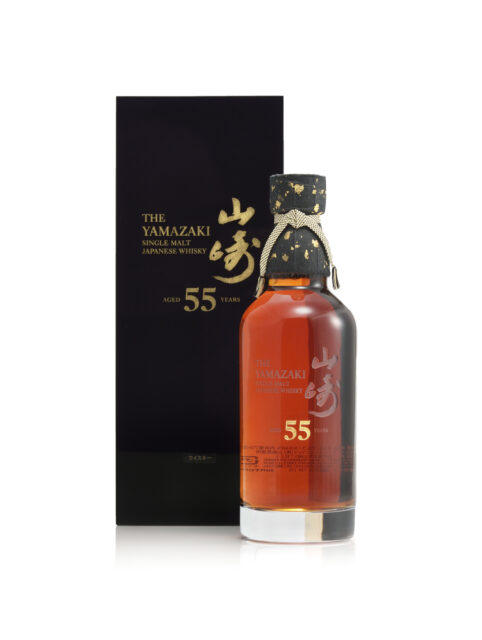 Auction house Bonhams held a fine wine and whisky auction in Hong Kong last week. Star of the show was a bottle of Yamazaki 55 Year-Old whisky, with a pre-sale estimate of HK$580,000 – 780,000. in the end, however, the bottle realised HK$6,200,000, which was more than ten times the estimate.

The result, however, was not surprising to whisky enthusiasts as this single-malt blockbuster was released only in June this year by Suntory. Limited to 100 bottles, each bottle was retailed at 3 million JPY (approximately US$27,500) before tax and customers could only purchase via a lottery system applicable only to residents from within Japan.

Yamazaki 55 Years was distilled in the 1960s and it is the oldest Japanese whisky available in the market. It was matured in both Japanese Mizunara oak casks from 1960 and white oak cask from 1964, the year of the previous Tokyo Olympics and Paralympics. Distilled to 46% ABV, it is described as having a deep reddish amber colour with a complex nose and a sweet aftertaste. The gold-dusted bottle is housed in a black Mizunara oak box with Suruga lacquer. The bottle mouth is wrapped in handmade Echizen Washi and tied with a traditional Kyoto braided cord.

Daniel Lam, Bonhams’ director of Wine and Whisky, Asia, commented: “The stunning price sets a new milestone for the market of Japanese whisky, a testament to collectors’ desire and determination to acquire the very best the market has to offer. We are pleased to see a keen demand for Scotch whisky in today’s sale as well.”