How to help South African wineries during lockdown

The South African government’s ban on domestic alcohol sales has already had a negative impact on brewers, wine estates and distilleries. 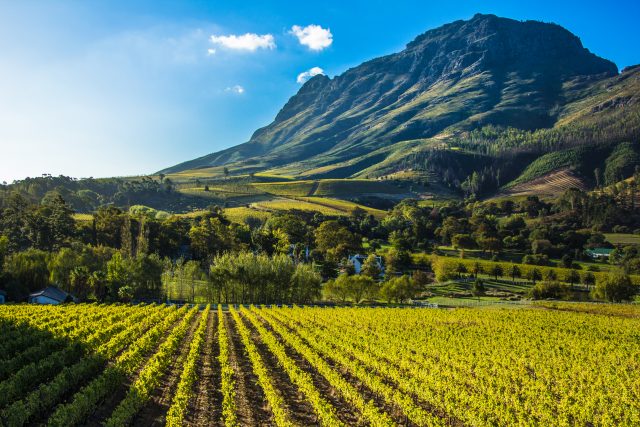 Several large corporations including Heineken, AB Inbev, Distell and VinPro have since issued a statement warning of billions in lost tax revenue and job losses.

Kurt Moore, chief executive of the South African Liquor Brandowners’ Association, said the ban would have a “disastrous economic impact on the industry and continue to exacerbate the loss of excise revenue”, warning that the move would “fuel the growth in the illicit liquor market”.

While breweries, distilleries and wineries can’t sell their products in South Africa, they’re still allowed to export. One of the best things you can do to help is order online.

Support from consumers overseas, and subsequent exports, is “the only thing that can save the industry from disaster,” according to Hannes Spangenberg. owner of South African wine and spirits merchant Vaar Merchants.

Industry leaders are calling on people to support the industry as part of a new campaign which will be publicised on social media with the hashtag #drinksouthafrican.

“Please do your best to support the South African Wine Industry by buying your favourite wine brands,” Spangenberg said.

“Even though sales within SA are banned, exports are still open. Now more than ever #drinksouthafrican.”

We have provided a list of agents, retailers, industry bodies and local media outlets that may be useful to help you find South African wines to buy or sell yourself. We will update this list as more suggestions come through.

WOSA is a non-profit trade body responsible for export promotions of South African wine. You can find more information on its members, South Africa’s diverse winemaking regions and events, and register for webinars on the industry on the WOSA website.

Awin Barratt is a UK-based agency that looks after hundreds of wineries and a handful of those are top-tier estates and brands in South Africa, including Stellenboch’s Jordan Wine Estate, Tokara, and Post House and Edgebaston.

Historic British merchant BBR sells an extensive list of SA wines from producers such as Waterford Estate, Mullineux and Scions of Sinai from just over £10 to up to upwards of £100.

Over the past few months, more people in the industry are facing up to the uncomfortable truth that there’s a historical lack of POC visibility in the wine trade. If you believe there is a gap in your own portfolio, Wines of South Africa has dedicated a page on its website to listing the country’s black-owned brands (sourced from the SA Wine Industry Transformation Unit).

Brave New World Wine is an Importer of South African Wines into Australia, and offers a range of mixed cases to suit all tastes.

Capreo is an online retailer that specialises in premium wines from more than 50 estates across South Africa, delivering across Europe.

One of the UK’s oldest merchants and agents, Corney & Barrow does a lot of work with South African estates, and is also hosting a virtual tasting and masterclass on Friday with Nelson Estates’ winemaker, Lisha Nelson. She was recently awarded the status of Cape Wine Master, a prestigious accolade in the South African wine industry.

Headed up by Richard Kelley MW, this wholesaler and importer specialises in South African and regional French wine. The business seeks out lesser-known estates with interesting stories to tell. Kelly’s dissertation subject for his MW examinations was ‘The importance of temperature in red wine making’, which eventually brought him to South Africa for the first time, and set the wheels in motion for his expertise on the country’s winemaking culture.

Supplier Enotria & Co has plenty of premium South African wines on its books, including those from Ken Forrester, a leading light in the country’s Chenin Blanc production. Enotria also offers a direct-to-consumer service. You can stock up on this website.

This online shop specialises in New World wine, and has more than 300 South African expressions in its portfolio ranging from under £7 to over £150. Frontier currently works with estates such as Babylonstoren, Bouchard Finlayson, Catherine Marshall, Darling Cellars, Ernie Els, Fairview, Franschhoek Cellar, Guardian Peak, and Jordan.

A merchant that has been providing west London with hand selected wines and bespoke services since for more than 30 years, Handford has an impressive 235 SA wines on its books.

UK merchant Laithwaites has a selection of SA wines on its website at a range of price points.

UK retailer Majestic currently stocks 34 South African wines online, and provides helpful insights for those who may not be familiar with the products.

Specialist distributor Museum Wines was recently commended in Drinks Retailing News’ annual awards thanks to its selection of South African wines. Museum imports and represents 10 farms, eight of which are exclusive to the wholesaler in the UK.

From the M Restaurant group comes M Wine Shop has a small but smart selection of premium SA wines sourced from Stellenbosch and the Western Cape.

New Generation act as wine and spirits importers to high end UK restaurants, bars, retailers, wholesalers and fine wine merchants. Nobu, Harrods and The Ritz are just a few names on the client list. It looks after distribution for equally premium SA estates such as Boekenhoutskloof, which was awarded 5 Stars in the 2020 Platter’s Wine Guide and named the guide’s Winery of the Year, the organic-focused Reyneke, Robertson Winery, Vinologist and The Chocolate Block.

Novel sells a range of drinks made in SA, including dozens of wines and a gin infused with truffles.

Headquartered in Cambridgeshire, Private Cellar is a merchant offering portfolio management, corporate events, and consultancy for weddings. It also sells a selection of high-end South African wine priced from just under £13 to up to £60 for a magnum of Cabernet Sauvignon made by Stellenbosch’s Aristea Wines.

Rascallion Wines, launched by Ross Sleet in 2018, is a négociant based in Stellenbosch which sources wine from cellars in Stellenbosch, the Swartland, Darling and Roberston.

Sleet used the company’s social media platforms to pledge support for a string of causes during lockdown, from providing meals to self-isolating South Africans, to partnering with Dignity Dreams, a charity that makes washable sanitary pads for women without access to disposable products across the country. Washable pads can now be purchased on Rascallion’s website for R220 (£10.36), with 100% of the profits going to the charity. Dignity Dreams also receives a portion of the sales price of each bottle of wine sold from Rascallion’s With Love from the Cape collection.

Seckford are a UK agent dealing with privately-owned wine estates throughout South Africa, Australia, New Zealand and South America, many of which routinely pick up awards in the tasting competition circuit. The wholesaler and importer works with 20 impressive SA estates from Stellenbosch to Walker Bay, including some of the country’s oldest producers. Seckford also routinely puts its winery partners in the spotlight on its website.

A UK retailer specialising in South African wines, which also offers a helpful insight into producers making waves in the industry at the moment.

Online merchant Swig has a selection of 59 SA wines ranging from established names to more off-beat and interesting bottles. Swig’s wines are available both for wholesale and direct to consumer. Prices range from £12.50 for a Swartland blend of Palomino and Semillon, to £50 for a Cab Sav sourced from the Upper Hemel-en-Aarde Valley. You can also find a rather unusual take on Vermouth from producer Adi Badenhorst, favoured by the bar team at Annabel’s in London.

Tanners is an independent wine merchant in the UK with an extensive selection of South African wines at a range of price points.

Kudos to Stuart Johnston for pointing out that The Wine Society, which stocks close to 50 SA wines from £6.50 to £30 per bottle and regularly runs tastings, masterclasses and seminars for its members, should be on this list. The Wine Society’s SA buyer, Anna Spooner, gave a Zoom masterclass in July, dedicated to cool climate South African Wines.

Vaar operates as a market export agent for South African wineries and spirits brands, and works with dozens of wholesalers in the UK, Netherlands, US, Canada, Hong Kong and more.

Vinpro represents roughly 2,500 SA wine producers, cellars and industry stakeholders, and works closely with the government on issues that have an impact on the profitability and sustainability of its members.

Wineland is a publication dedicated to the South African wine industry. Here, you can find in-depth information on what is happening in the country right now, from how the drinks trade is campaigning against regulations, to the future of SA wine tourism.