Following the acquisition of Freixenet by Henkell in March 2018, the fully integrated group has surpassed €1bn in turnover in the financial year 2019. 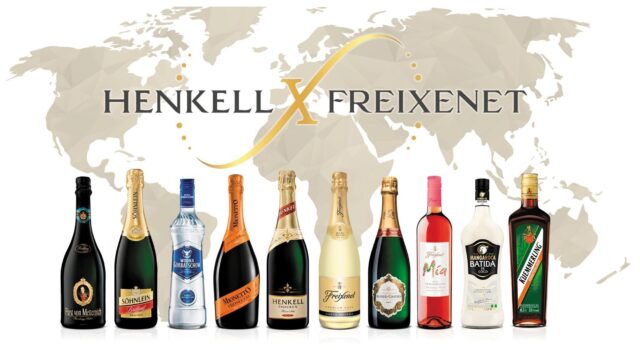 Representing the first full year after the 50% acquisition of Freixenet in Spain’s Sant Sadurní d´Anoia, Henkell Freixenet increased its net sales excluding sparkling wine and alcohol tax by +28.2% to €1.056 billion in the 2019 financial year.

Including tax on sparkling wine and alcohol this amounts to €1.290 billion and +25% in growth.

Last year’s decline was due to a reduction of low margin business in several markets.

Speaking exclusively to the drinks business yesterday, CEO of the group, Dr. Andreas Brokemper, said that the 2019 financial year was “a very important year for the group” as it reflected the performance following the merging of both businesses operations.

He also said that the group had met its goal, which was to pass the €1 billion in turnover excluding tax and duties.

Meanwhile, he told db that Henkell Freixenet was getting closer to an aim of holding 10% of the global sparkling wine market, with currently an 8.5% share in volume (and a 9.7% share in value), based on IWSR figures (see pie chart below).

“We want every tenth glass of sparkling wine to be from Henkell Freixenet,” he said, adding, “And in terms of value, we are more or less there.”

Of course the positive nature of last year’s results must be viewed in relation to the current situation, with sales of all drinks affected by the ongoing coronavirus crisis.

Stressing, as previously reported by db, that all the group’s wineries “are still able to produce”, he said that it was very difficult to forecast the full impact of Covid-19 on Henkell Freixenet’s financial year-end performance for 2020.

Recording an IWSR forecast of a 15% decrease in sparkling wines sales by volume for the year due to the pandemic, he said that he believed that Henkell Freixenet would see a similar drop, as long as there isn’t a second wave at the end of 2020 – with the last three months of the year being the most important sales period for fizz.

He added, “I think there will be a drop of 15% and then I think consumption will come back.”

Looking across the sparkling wine sector, he commented, “My personal opinion is that Prosecco will come back faster, because it is consumed more on an everyday basis, while Champagne will need some time more, and it is very affected by duty free that has come down tremendously.”

Finally, he commented that the group was “very happy” that the combined organisation of Henkell and Freixenet had been completed before the pandemic struck, because it has created a group with a wide portfolio and a global reach, which means that “we have a stronger set up to face this crisis”.

“We now have global diversification, a balance between Cava and Prosecco, and a strong still wine business, across all countries, so we were lucky to have a year prior to the crisis,” he added.

“2019 gave us the opportunity to establish our global organisation, and a joint culture – something that would not be easy now using video conferences,” he concluded.

The full financial report from the group can be seen below, along with the highlights: 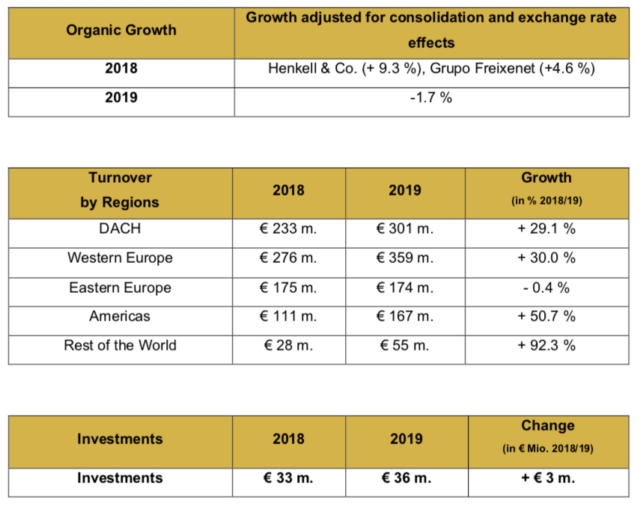 “The 2019 financial year was dominated by the merger of two global companies. In both a challenging market and a competitive environment, we were successful in realigning the organisation strategically and organisationally, while at the same time gaining market share in numerous markets,” comments Dr. Andreas Brokemper, Chairman of the Management Board of Henkell Freixenet on the publication of the annual key figures.

Following the merger, Henkell Freixenet now has its own sales organizations in 30 countries. The Group’s wineries are spread across 11 countries. The largest production sites are the Henkell Sparkling Winery in Wiesbaden and the Cava Winery at Freixenet’s headquarters in Sant Sadurní d ́Anoia near Barcelona (Spain), followed by the Mionetto Prosecco Winery in the historic centre of Valdobbiadene in the Veneto (Italy).

In addition to the integration of the two companies, the focus in 2019 was on numerous divestments to follow the strategy to focus on the joint brand portfolio. In May 2019, the Henri Abelé Champagne House was sold, which was followed in June by the sale of the Spanish wineries to the co- shareholders. In addition, the spirits brands Scharlachberg, Sternmarke, Holborn and Jacobi were sold in Germany in September 2019. At the end of the year, the production of the Kiev sparkling winery in Ukraine was closed. Moreover, the Deakin vineyard in Australia was also sold in April 2020. “We are fully on schedule with the strategic realignment of Henkell Freixenet,” comments Dr. Andreas Brokemper.

In Germany, Austria and Switzerland (DACH), Henkell Freixenet closed the 2019 financial year with sales of EUR 301.1 million (+29.1 %). In Germany, Henkell Freixenet is the market leader in the Cava market, number 2 in Prosecco Spumante, and number 2 in overall sparkling wine. Fürst von Metternich, Germany’s leading premium sparkling wine, saw record sales numbers (+1.8 %, 9.8 million 1/1 bottles), as did Wodka Gorbatschow with a sales increase of +9.1%, which resulted in 20.9 million 1/1 bottles sold. Double-digit growth was achieved by the multiple award-winning prestige wines from Schloss Johannisberg. In Austria and Switzerland, the Group is the market leader with the Henkell (A) and Freixenet (CH) brands, where sales grew at a double-digit rate as well.

Western Europe is now the Group’s largest region, accounting for 34 % of sales. The Western European business closed the 2019 financial year with revenues of EUR 359.3 million (+30.0 %). The largest market is Great Britain, where Freixenet Prosecco and Italian Rosé as well as the wines of i heart Wines achieved double-digit growth. In Spain, Freixenet was able to expand its market share. The Freixenet brand is the market leader in Spain in both quantity and value3. Yvon Mau in France – since 2020 known as Freixenet Gratien – was able to push ahead with its reorganisation in 2019 and achieved significant growth with both Freixenet and Mionetto. It was able to increase its market share in the declining sparkling wine market. In Italy, Mionetto is one of the most popular brands in gastronomy and retail and achieved double-digit growth in 2019 due to the high international demand for Prosecco.

In its Eastern European markets, Henkell Freixenet recorded a slight drop in sales of -0.4 % to EUR 174.3 million. This was due to the closure of production in the Ukraine in line with our strategy following the slump in demand. In the Czech Republic, the market leader Bohemia Sekt was able to expand its market share again after price increases in the previous year. Törley and Hubert, both sparkling wine market leaders in Hungary and Slovakia respectively, also recorded a pleasing market share development. Henkell Freixenet had a record year in Poland, where Mionetto, the Prosecco market leader, exceeded the one million mark in sales. In all Eastern European countries, Henkell Freixenet benefited from the increased demand for premium sparkling wine, especially Prosecco and Cava.

In the Americas, Henkell Freixenet closed the 2019 financial year at EUR 167.1 million (+50.7 %). The strong performance of Mionetto Prosecco, with growth of 25 % in the USA, contributed significantly to the positive sales trend. Freixenet and Segura Viudas fell just short of the previous year’s sales volumes due to price increases. The Gloria Ferrer winery developed positively, both in the location business and in retail. In Mexico, Henkell Freixenet’s Sala Vivé is the country’s best-visited winery. In 2019, the VinWine sales joint venture was sold and a sales office was established in Mexico City. In June, the Argentinean winery Finca Ferrer was sold to the co-shareholders. In Brazil, Henkell Freixenet established their own sales organisation, which is responsible for the marketing of all the Group’s brands and has had a very successful start.

The Rest of the World region comprises of Japan and Australia as well as remaining parts of the classic export business including duty free. The region achieved sales of EUR 54.6 million (+92.3 %). Japan, the largest single market, benefited from the elimination of import duties and achieved double-digit growth. In Australia, both Henkell and Freixenet recorded volume growth. Business in China developed positively as well, above all with the classical German spirit drink Kuemmerling.

Long-term brand and image cultivation, product innovations and the ongoing customer-oriented optimisation of processes and structures are the guarantee for the sustained success of Henkell Freixenet. With Freixenet Prosecco and Italian Rosé in the novel, multiple award- winning diamond bottle, the Group has achieved worldwide success. In England, Freixenet Italian Rosé has become the best-selling rosé sparkling wine. Consequently, the assortment has been expanded to include Italian wines in the extraordinary diamond bottle in 2020. i heart Prosecco Superhero as a thank you to the workers of England’s National Health Service (NHS) as well as the new wine partnership with Wild Rhino Sanctuary NPC (Care for Wild) are further examples of innovations that highlight the Group’s social commitment.

In 2019, investments reached a new high of EUR 35.9 million (2018: EUR 33.1 million). The largest single investment was the expansion of the Mionetto Prosecco winery in Valdobbiadene. After the planting of more than 300 ha of vineyards in Moravia, a new winery was built in Mikulov. Further investments serve to increase sustainability and efficiency at the group’s 20 winery sites.

The number of employees rose to 3,556 worldwide in 2019 (2018: 2,701) due to the full-year inclusion of Grupo Freixenet employees. There were 603 employees in Germany and 1,019 employees in Spain. The international subsidiaries accounted for 1,934 employees. Henkell Freixenet today is characterised by international diversity. Under the motto “Growing together”, initiatives were launched to get the new team committed to the common goals.

With the outbreak of the Covid 19 pandemic, the outlook for the future has changed. As early as mid-February, comprehensive measures were decided upon to safeguard the health of employees and production at the sites. As sparkling wine consumption requires conviviality and occasion in almost all countries of the world, the pandemic has already had a significant impact on sales in almost all countries. IWSR4 expects global demand to fall by -15 % in 2020. Thereby, Italy, Spain and France are particularly affected, as fierce contact restrictions have led to a slump in sparkling wine consumption in the gastronomy business.

“A forecast for the entire year is hardly possible. The business development depends largely on the further course of the pandemic and the economic and financial consequences for the markets. We expect a significant impact on sales, especially in the gastronomy and duty-free segment, and have therefore taken early action to compensate for lost sales. Due to the strong country and brand diversification, we are confident that we will master the crisis well and emerge from it stronger”, says Dr. Andreas Brokemper.