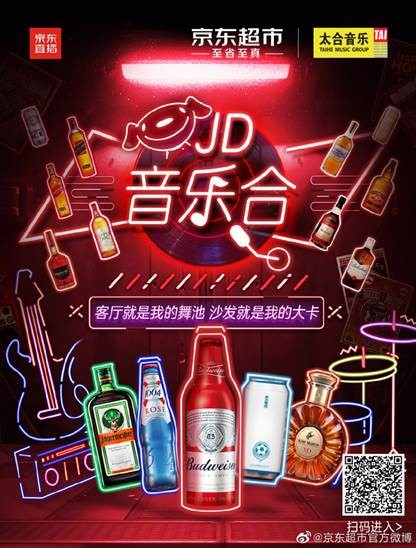 The live-streaming e-commerce campaign “Online-Clubbing” has been launched by Jingdong, which has teamed up with Chinese record label Taihe Music Group and multiple international drinks companies, such as Budweiser, Rémy Martin, Carlsberg and Pernod Ricard.

Every week, JD will invite musicians and DJs from Taihe to hold a three-hour live music show on JD Live, the live-streaming e-commerce session of the platform, and encourage viewers to purchase drinks at the same time as if they were in a nightclub.

As the Covid-19 outbreak has limited people’s opportunities to go outside, young consumers have moved online instead. Seeing the trend, JD decided to shift entertainment online and leverage the promotion of liquor products through this channel.

It is hoped these ‘shoppertainment’ sessions create an innovative win-win situation allowing customers to shop in a new way and liquor brands who’ve suffered from the shutdown of offline channels to pick up some business.

After kicking off in mid-Feburary, the sessions have apparently achieved encouraging sales so far. During one of the live shows, the sales of imported liquor from a single partner brand increased by 70%, and sales of its whiskey products increased eight times compared with the same period on the day before.

In another session, beer sales increased by 40% compared with the same period of the day before.

JD is hoping to enrich its live broadcasts with more music performances in clubs, live houses and even music festivals in future, making it a long-term program to uplift customers’ shopping experiences.