What is Burgundy? Part Two: The Middle Ages

When we left the story at the end of the first part, the Franks had conquered the Kingdom of Burgundy in AD 534. 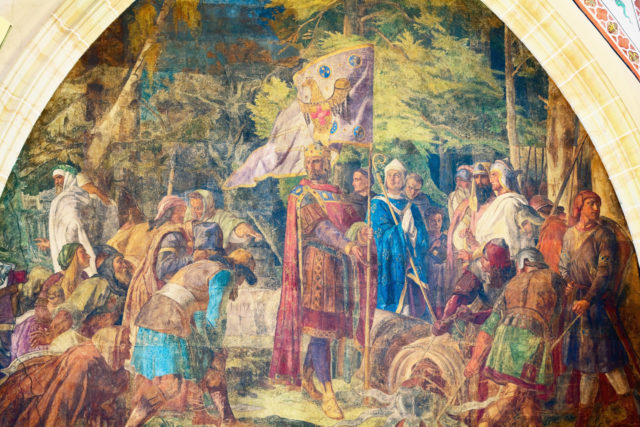 Although rolled into their wider domains, which they were beginning to refer to ‘Francia’, the Merovingian dynasty of Frankish kings did sometimes style themselves as kings of ‘Francia et Burgundia’.

The course of Frankish history for the next two centuries is very complex and we have more than enough complexities to contend with so, in short, the Merovingians gradually saw their power stripped away by overbearing nobles, most particularly the mayors of the palace – managers of the royal household – until they became mere figureheads.

In 751 AD, any pretence that the Merovingians still ruled was cast aside with the election of Pepin as the new king of what would become the Carolingian dynasty. Pepin’s son in turn is known to history as Charles the Great or Charlemagne – the ‘Father of Europe’.

Charlemagne would create a great continental empire stretching from the Pyrenees to the Elbe and the North Sea to the Mediterranean, re-establishing, as he and his contemporaries saw it, the Western Roman Empire in spirit. He was eventually crowned emperor by the Pope in Rome on Christmas Day 800 AD and so was reborn the Roman Empire (later ‘Holy’); a new Rome in the West as partner to its Eastern Byzantine cousin in the Greek East – which irked the Byzantines intensely.

Charlemagne’s endowment of the church with land across his empire was extremely important to the growth and development of viticulture in Europe, not least in the Rhinelands and eastern France but let’s not get too tangled up in this for now. What of Burgundy in all this?

The old Kingdom of Burgundy had remained an extremely important entity within the Frankish kingdom and Charlemagne’s empire.

More change, however, was on the cards. When Charlemagne’s son, Louis the Pious, died in 840 AD a civil war erupted between his three sons, Charles, Lothair and Louis, over this great inheritance.

After three years, the brothers called a truce and partitioned the great kingdom between them at the Treaty of Verdun.

Charles took West Francia – most of modern France – as his kingdom, Lothair Middle Francia – running from the North Sea down through Belgium, Alsace and the Rhone and into Italy as far as Rome – and Louis received East Francia, the bulk of modern western and central Germany and Austria.

This is an important moment in the evolution of ‘Burgundy’ because crucially, when the border between West and Middle Francia was decided, the land west of the river Saône (a convenient natural barrier) was given to West Francia.

The Duchy of Burgundy

In 880 AD this territory would be made into a duchy of West Francia, one of seven powerful dukedoms (alongside Champagne, Aquitaine, Normandy, Brittany, Gascony and Flanders) in the kingdom and one which was further sub-divided into several counties, each managed by a count – one must remember this is the beginning of what we now call ‘feudalism’, a system of vassalage where land was held by nobles with obligations to a monarch – covering Chalon, the Charolais, Mâcon, Autun, Nevers, Avallon, Tonerre, Senlis, Auxerre, Sens, Troyes and Auxonne.

The duchy’s administrative centre was Dijon, which had grown from its Roman origins into a flourishing mercantile town.

Between 880 AD and 1004, the duchy would be ruled by various nobles and families until it was annexed by Robert II, king of France and member of the new ruling House of Capet.

In 1032, Robert II’s son, also called Robert, rebelled against his older brother King Henry I and was given the Duchy of Burgundy as part of the peace terms.

An unpleasant and violent man, his descendants would nonetheless rule as Dukes of Burgundy until 1361, powerful and important nobles in France. We shall return to them later.

The Kingdom of Two Burgundies

What remained of the old Kingdom of Burgundy after the Treaty of Verdun was soon to undergo further radical change.

Lothair I did not live for long following the Verdun accord and, knowing he was dying, moved to split Middle Francia between his own three sons – unhelpfully called Charles, Lothair and Louis as well! This was the Treaty of Prüm in 855.

Again, what happens over the next century is a very complicated series of wars and annexations and brief empires rising and falling.

By the beginning of the 10th century, both Lothair II and Charles had died and their territories had been further split and subdivided between the kings of France and Germany or taken over by powerful noble families.

Their union created the Kingdom of Two Burgundies but also caught the eye of the Emperor Otto I in Germany who nominally (though to that point, rarely) claimed overlordship of that territory.

The kingdom could remain, the emperor said, as long as it was a vassal of the Empire. This was agreed and the kingdom was ruled by a line of very competent rulers until, fatally, the last king (Rudolph III) died without issue in 1032 (ironically the same year Robert received the Duchy of Burgundy).

The emperor Conrad II annexed the territory and took direct control of it, adding it to the kingdoms of the Empire – alongside Germany and Italy. Henceforth, the emperors would be crowned Kings of Germany in Aachen, Kings of Italy in Pavia and Kings of Burgundy in Arles.

The emperors would claim to be Kings of Burgundy until 1215 but by then it was largely in name only.

Germany and Italy always took precedence over Burgundy in the coronation order and Imperial wars and politics were much more focused on these territories. As a result the various counties and domains of Lower Burgundy quickly drifted further from Imperial control, generally into the French sphere. The French themselves were only too happy about this and actively encouraged it. Provence (beyond the Empire’s direct control since 1127) went over to France in 1246 while the French flagrantly marched into Lyon in 1311.

Furthermore, the idea of a ‘Lower Burgundy’ had gradually fallen into disuse, being replaced with regional titles we would recognise today; Provence, Orange, the Dauphiné and so forth, while in Upper Burgundy the lands around Geneva and the Savoy were likewise forging their own paths.

Soon all that was left of ‘Burgundy’ east of the Saône was the County of Burgundy.

The County of Burgundy

The County of Burgundy or County Palatine given its important position as a border province was centred around the cities of Besançon (the archiepiscopal seat) and Dole (the primary city of the secular ruler), directly opposite the Duchy in France.

As with many frontier territories there were a lot of cross-border family ties and by the 11th and 12th centuries, the Counts of Burgundy were also Counts of Mâcon in the south of the duchy. As a consequence, in the 1130s, Count Renaud III declared himself a freigraf or franc comte, free of Imperial authority.

This displeased the emperor Lothair who marched against Renaud but died while crossing the Alps on his way back from a Sicilian campaign. The rebellious count lost the resulting struggle against the new emperor, Conrad III, and his lands were occupied. Renaud’s daughter Beatrice, however, was the legitimate heiress and in 1156 she married Emperor Frederick Barbarossa who wished to cement his authority and claim to the county.

The title of count then passed to one of Frederick and Beatrice’s younger sons, Otto, and then to his daughter Beatrice and so on down the years until we reach Jeanne of Burgundy. Jeanne was married Philip of France who, in 1317, became King Philip V.*

They had two daughters who are important to this story: Jeanne and Margaret. Jeanne was married to Odo IV, Duke of Burgundy and Margaret to Louis, Count of Flanders.

When Jeanne, Queen of France died in 1330, her titles and territories including the County of Burgundy were passed first to her daughter Jeanne, Duchess of Burgundy and then to that Jeanne’s grandson Philip (her son had pre-deceased her). He stood therefore to be both Duke and Count of a recombined Burgundy.

It was arranged for Philip to marry his second cousin, Margaret, in 1355 (when they were nine and five respectively) but Philip died (of either the plague or a riding accident) in 1361 before the marriage could be consummated.

On Philip’s death the Duchy of Burgundy was reclaimed by the French crown and the title of Count/Countess of Burgundy reverted to Jeanne’s younger sister Margaret, now dowager Countess of Flanders.

Her son Louis would therefore receive the title after her and his daughter Margaret after him. As heiress to the counties of Burgundy, Flanders, Nevers and Rethel, Margaret was a highly desirable bride in waiting and a young and ambitious noble called Philip of Valois was quick to pounce.

*This is the same Jeanne who was implicated in the Tour de Nesle Affair of 1314, the setting for Maurice Druon’s first book in his series ‘Les Rois Maudits’. Alongside Jeanne, her sister Blanche was married to Charles of France and the Duke of Burgundy’s daughter, Margaret, was married to the eldest brother, Louis. All three women would be accused of infidelity with two Norman squires (who were brothers) Walter and Philip of Aunay, their affair being conducted in the Nesle Tower in Paris. It was the women’s sister-in-law, Isabella, who alerted her father, King Philip IV to the apparent affair. The resulting scandal had a huge fallout. The Aunay brothers were brutally tortured and then executed for their lèse majesté by being castrated, hanged, drawn and quartered. Both Blanche and Margaret were tried by the Paris Parlement and found guilty. They were imprisoned in Château Gaillard in Normandy for many years. Margaret died there, possibly murdered though also possibly through cruel mistreatment which caused her to fall ill, while Blanche’s own health was so broken she died in a convent after her release. Jeanne was also tried but while she was found to be have known of the affair she was acquitted, in no small part due to the influence of her husband Philip who had a much stronger relationship with her than his brothers had with their wives – especially Louis and Margaret whose marriage was very unhappy. Louis and Charles would both remarry. After Philip V’s death in 1315, Louis, Philip and Charles would all rule in turn but none had a male heir and so the throne passed to their cousin Philip of Valois.

READ MORE: What is Burgundy? Part Two: The Middle Ages