US and France agree tariff truce for a year

After the US government threatened up to 100% tariffs on US$2.4 billion worth of French goods, including wine, American President Donald Trump and the French President Emmanuel Macron have agreed to a truce for a year. 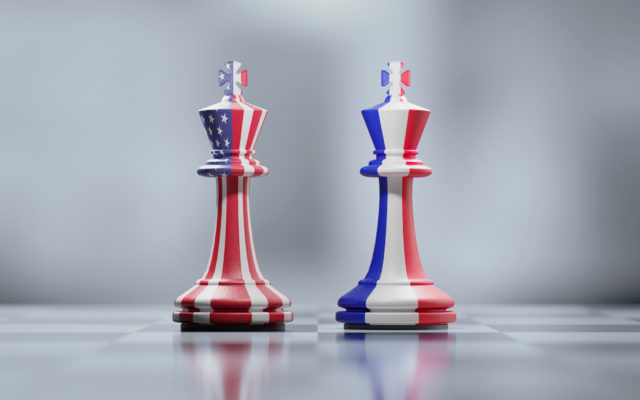 Back in December 2019, the US government proposed additional tariffs of up to 100% on French goods including wine, cheese and handbags in retaliation to France’s digital services tax.

Dubbed GAFA (an acronym for ‘Google, Apple, Facebook and Amazon’), France’s digital tax would impose a 3% levy on the total annual revenues of the largest global technology companies providing services to French consumers.

The dispute had been brewing for some months. In July 2019, President Trump promised to announce “substantial reciprocal action” to what he called “[President] Macron’s foolishness”. However in the following month, an agreement was reached to suspend the spat. It was later rekindled in December.

In a tweet posted on 20 January, President Macron wrote that he’d had a “great discussion” with President Trump and that the two countries would “work together on a good agreement to avoid tariff escalation”. President Trump posted the word “excellent” in response to the tweet.

Great discussion with @realDonaldTrump on digital tax. We will work together on a good agreement to avoid tariff escalation.

A French diplomatic source told various media outlets that Macron and Trump had decided to hold off on any further tariffs until the end of the year. The two leaders would continue negotiations at the Organisation for Economic Cooperation and Development (OECD) on the digital tax issue during that period.

The source added: “They agreed to give a chance to negotiations until the end of the year. During that time period, there won’t be successive tariffs.”

French Finance Minister Bruno Le Maire later told reporters in Brussels that there was now “an agreement” between the US and France “to avoid any tariff escalation and avoid any trade war”.

He added: “It’s remains a difficult negotiation with digital tax, the devil is in the details and we need to resolve the details.”

He later told French television broadcaster LCI that France was “ready to take some steps in the direction of the United States”, but that negotiations had been “difficult” and were “far from won”.

French wine is certainly not out of the woods just yet. It has already been the target of US tariffs after a 25% import duty was imposed on still wine (not over 14% ABV) back in October. The tariffs also affect products made in Germany, Spain and the UK, transported in containers of 2 litres or less. Liqueurs made in Germany, Ireland, Spain and the UK as well as Scotch whisky are also subject to an additional 25% tariff.

These tariffs are in response to a separate issue, specifically a dispute over subsidies given to aviation company Airbus over rival Boeing.

In December, the US government said it may increase these tariffs by up to 100%, and potentially extend the list to cover sparkling wine, fortified and bulk wine made in all EU countries, as well as other whiskies made in Europe, most notably Irish whiskey.