Italy’s fraud officials have seized hundreds of tubes of Prosecco-flavoured Pringles because they use the term reserved for the famous sparkling wine. 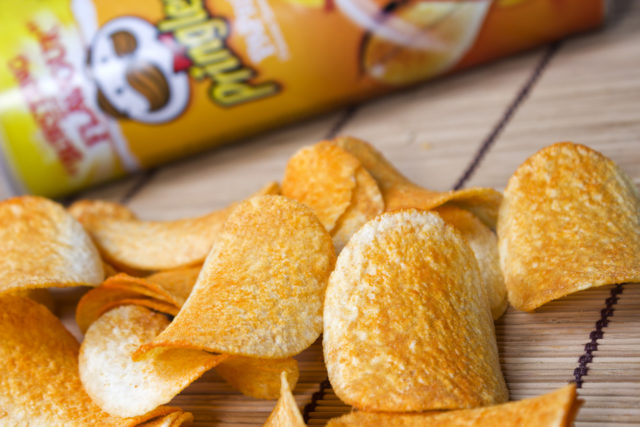 Around 250 tubes of Prosecco and pink peppercorn flavoured Pringles have been seized from an Italian supermarket chain in Veneto, the home of Prosecco.

With exports rising by a record 21% in 2019 in foreign markets, Prosecco has become the most popular Italian wine abroad.

The country’s lawmakers and winemakers alike are fiercely protective over the use of the term ‘Prosseco’.

Until 2009, Prosecco was the name used for the grape variety which forms the base of the Italian fizz, but when the producers of Prosecco realised that a grape variety couldn’t be geographically delimited and protected, they registered the word Prosecco as a region, or DOC (Denominazione di Origine Controllata).

Only producers making Prosecco in the region itself are allowed to use the term. Italian authorities have also made efforts to secure legal protection for Prosecco beyond the EU, and are currently in an ongoing dispute with Australian ministers, who want to be able to export own version of the fizz in Europe.

Luca Zaia, the president of Veneto, took to Facebook to praise the ICQRF for seizing the snacks and preventing Pringles from “damaging honest producers who promote quality and territory.”

“Just think: yesterday in a chain of supermarkets in the Veneto region, hundreds of packets of ‘Prosecco chips’ purchased by a Dutch company were seized, including among the ingredients an unspecified ‘Prosecco powder’,” he said.

“We have been insisting for years – to all administrative and government levels – in protecting our excellences, protecting them from fraud, abuse and Italian sounding, which go above and beyond damaging honest producers who promote quality and territory!”

“In the UK, prosecco and peppercorn was a limited edition Christmas flavour and is no longer in market,” a statement from Kelloggs, which owns the potato-based snack brand, said

According to Kelloggs, Pringles used Prosecco DOC as an ingredient in the aroma and the use of the name of the product on the packaging was designed in line with DOC guidelines and European regulations.

“We did use a Prosecco certified product as an ingredient in the seasoning and our use of the descriptor on the packaging was developed in line with the DOC (Denominazione di Origine Controllata) guidelines and European regulations.

“We have no plans to produce this flavour in the future.”

“A greater consideration is given to the Designation Prosecco, even in evocative terms, and not only in the agri-food sector: the demonstration of the importance given to our designation, worthy of protection on all fronts.

“A special thanks goes to all the institutions responsible for the controls, in particular ICQRF and the Ministry (MIPAAF), because the close collaboration with them allows to get these important results.”