Cricketing legend turned wine-maker Sir Ian Botham is expanding his drinks portfolio with the launch of his first gin – and has not ruled out bringing out a whisky further down the road. 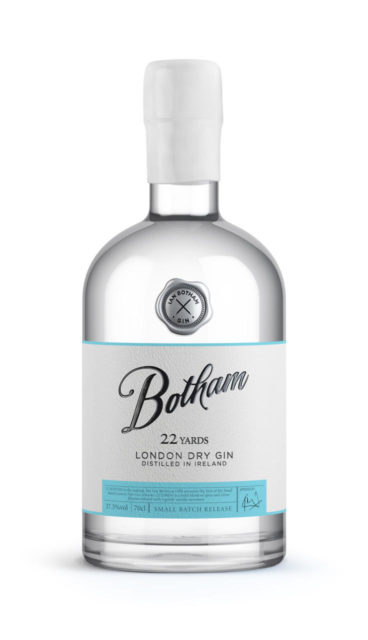 The Botham 22 yards London Dry Gin, which is set to go on shelf in November, derives its name from the 22 yard length of a cricket pitch, a nod to the 1,700 wickets taken by Botham during his professional cricketing career.

Speaking exclusively to the drinks business ahead of the launch, Sir Ian said the extension into gin was a natural progression for his wine portfolio as gin had always been his favourite drink.

“First and foremost I like gin,” he told db, “and there were as many fascinating gins out there as there are wines.”

“When I travel the world which with the wine have been doing a lot of, my cleansing tipple is a gin and tonic. After a day of tasting wines, if you’re blending and tasting 100 wines in a day, the last thing you want when you get home is more wine, the palate has been exhausted. So my go-to has always been gin and tonic, and I try to find one that’s local to where I am – some are very nice, some are not very nice and some are awful. But if you don’t try them, you don’t know!”

The idea started as family project with his wife and daughter Sarah – who since 2016 has run mobile bar and events business Fancy a Tipple with her husband Darren, selling cocktails, and small-batch gins from a quirky converted horse-box trailer at sporting events and weddings – each creating their own blends.

Having been heavily involved with the blending of the wine range, Sir Ian has taken a similar approach with the gin.

“When we blended it, we studied the botanicals and had a few goes blending batches over the last 6-12 months and eventually we found the one we thought was interesting,” he told db.

“The three of us made up our own botanicals to make up the gin, then did a blind tasting and we found one we thought was very good – something different, with a bit of orange and citrus fruits. The one we actually picked was my daughter Sarah’s creation and we thought ‘let’s give it a crack’, so we teamed with distillery in West Cork and the first batch is being bottled now, so it’s exciting times.”

The trio worked alongside Master Gin Distiller Deirdre Bohane at the renowned distillery, West Cork Distillers in Ireland, and the gin has been bottled in packaging similar to the style of the Botham wine range.

Paul Schaafsma – who represents the cricketer’s drinks range through Benchmark Drinks – said that Sarah would be the driving force behind the gin, attending functions and hosting events.

“It’s nice to have a family member right behind the gin,” he said, adding that Sir Ian was very pleased to have brought his daughter into the expanding business.

However Sir Ian hasn’t ruled out expanding the range further with other spirits in due course.

“Who knows, we might look at an Irish, English or Scottish whisky, or a rum, although you have to walk before you run,” he said. “The wine’s going extremely well, and if we can get the gin into 14 countries like the wine is in now, that would be a massive step in the right direction.”

The former English cricketing captain is also looking at adding more wines to the range.

“We’re looking closely at Malbec at the moment and even at a top end Pinot Noir from New Zealand which is something I’ll be looking at when I’m down there. So there’s definitely more to come. But as I said, we’ll walk before we run.”

“It’s much like anything, if you think you’re, if you think you’ve got it cracked, you probably haven’t – there’s always something new or different or interesting. But it’s fun and I should really have started it 15 years ago!”