Diageo has added two more Game of Thrones-themed whiskies to its Johnnie Walker range to cash in on the “culture fostered around the series.” 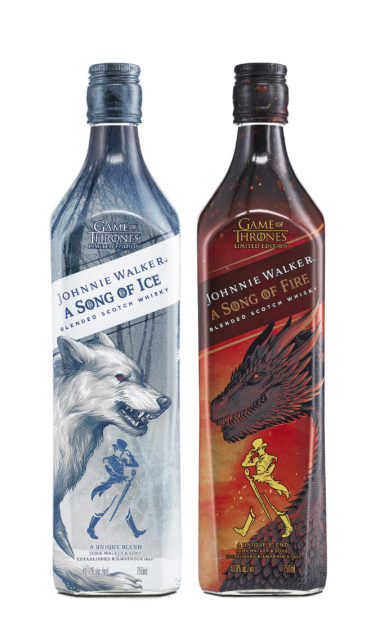 The latest whiskies are inspired by two of the most important houses in the show – House Stark and House Targaryen. They are successors to the White Walker by Johnnie Walker limited edition blend, which Diageo launched in 2018 in partnership with HBO.

A Song of Ice, which is inspired by the northern House Stark, is made with single malts from Clynelish, near Brora, Sutherland in the Highlands of Scotland, and exudes “a crisp, clean taste like the unforgiving force of ice that shapes mountains and stops rivers,” according to the brand. The packaging also features a direwolf, which is the sigil of House Stark in the show.

The second whisky, A Song of Fire, is “rich and spicy” and has more prominent smokey flavours due to the use of peated malts from Caol Ila distillery. The whisky’s bottle design shows a fiery setting, taking cues from House Targaryen’s dragon sigil.

The final series of Game of Thrones aired in April this year, wrapping up on 19 May.

The drinks giant also launched a Game of Thrones Single Malt Scotch Whisky Collection this year, featuring eight Scotch whiskies paired with one of the Houses of Westeros, as well as the “Night’s Watch”.

Diageo’s Game of Thrones whiskies helped the company to boost its net sales this year to £12.9 billion.

“We were very proud to partner with Johnnie Walker again to bring more whiskies to the realm”, said Jeff Peters, HBO’s vice president of licensing and retail.

He said that, despite the fact the show ended three months ago, the two companies are confident that Thrones fans will still “engage with the culture fostered around the series and look for the special collectibles that let it live on.”

After seeing the excitement there was for White Walker by Johnnie Walker, we are thrilled to celebrate the end of an epic tale by offering more quality whisky for fans of the show and whisky enthusiasts to collect and enjoy,” .

The whiskies will be available globally in October, with a RRP of £34 for 70cl.