Diageo is releasing a Game of Thrones Johnnie Walker whiskey to coincide with the final season of the hit HBO series, which will end its eighth season next year. 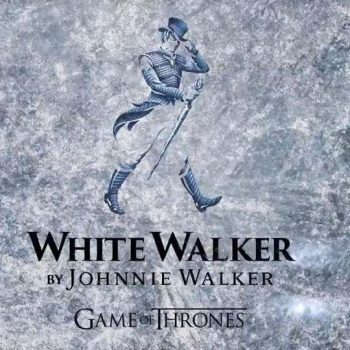 Called White Walker, Johnnie Walker recently posted a 20-second video on social media announcing the imminent launch of the Scotch, featuring a dramatic soundtrack and the tagline “Scotch is coming to the realm this Fall – White Walker by Johnnie Walker.”

While details are deliberately scant at this stage, all that Diageo would say is that it was partnering with HBO on White Walker by Johnnie Walker, which would launch this coming winter.

A range of beers and wines have already been released in collaboration with the Game of Thrones brand, but this will be the first spirit, delivered through a collaboration between HBO and Diageo.

It follows the limited release of a Johnnie Walker whisky for the release of Blade Runner 2049, and the most recent unveiling of Jane Walker – a limited edition bottling for  International Women’s Day in March 2018.

The whisky itself was Johnnie Walker Black whisky, but its label featured a woman wearing a suit, as opposed to the well-known, walking man.

The move was intended to not only illustrate Diageo’s commitment to gender equality, but the drinks giant’s desire to attract more women into whisky. 250,000 bottles of Jane Walker 12-year-old Black Label will go on sale in the US on International Women’s Day on 8 March priced at US$34 for a 750ml bottle.

For every bottle produced, Diageo donated $1 to organisations that support women’s causes, including Monumental Women and She Should Run, which inspires women to run for office.