Almost 30,000 people have said they are attending a Facebook event entitled ‘leave work and go [to] the beer garden, they can’t sack all of us’, as the UK braces itself for record-breaking temperatures. 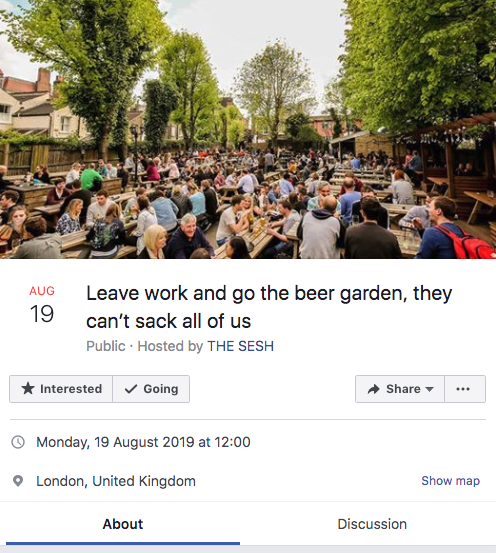 As a heatwave grips the UK, temperatures in the London area are expected to reach 39 degrees, beating the current UK record high of 38.5C which was recorded in August 2003.

Despite this, the Facebook event is scheduled for 19 August at 12pm in the hope that the hot weather will extend beyond this week.

While this event may be wishful thinking, some food and drink businesses are introducing special measures to ensure workers don’t overheat.

London gastro pub The Drapers Arms, placed 91st in Wine List Confidential’s top 100 restaurants in London for wine, has closed its kitchen today, stating that “we cannot reasonably ask staff to work in a 40 degree environment”.

Meanwhile, for those attending Jeff Wayne’s The War of The Worlds experience at 56 Leadenhall Street, a limited-edition cooling cocktail has been created. The Heat Ray (£11) combines Hennessy, Shiraz, Cointreau, Kings Ginger, orange juice, lime juice, Maraschino and is finished with fresh fruit and chilli flakes. It will be available from Friday to Sunday.