Researchers from the University of California, Riverside, are testing to see if a species of tiny wasp could stave off a potentially devastating invasion of sap-sucking insects that could seriously affect California’s grape crops. 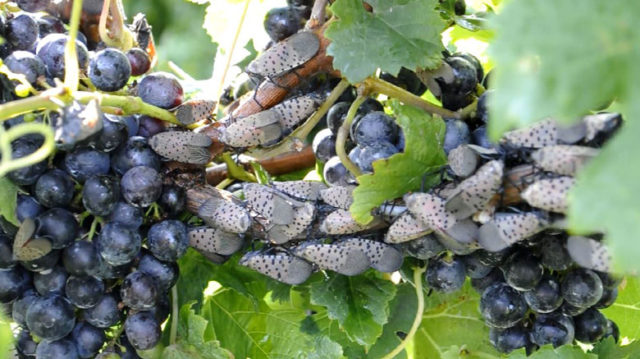 Researchers from the University of California, Riverside, are testing to see if a species of wasp the size of a sesame seed could stave off a potentially devastating invasion of sap-sucking insects that could seriously affect California’s grape crops.

According to the University, the pest, a spotted lantern fly (Lycorma delicatula) originally from China, was first detected in Pennsylvania five years ago, but has since spread across the Eastern Seaboard, leading experts to fear they will eventually spread to California.

The bugs cause widespread damage by draining the sap from vines and apple trees as well as other plants, and secreting a waste product that encourages other insects and fungi, including a black sooty mould that inhibits the plants ability to grow. Although the flies can only fly short distances, they have spread rapidly because the females lay their eggs on nonbiological materials, such as train cars, motor homes, wooden pallets, and trucks that inadvertently move them into new territories, the University said.

Mark Hoddle, director of the Center for Invasive Species Research at UC Riverside, said the team were taking a proactive approach before the insect hit Californa’s wine country, which is the world’s fourth-largest wine producer, selling an estimated $35 billion worth of wines domestically and exporting $1.5 billion per year.

“Normally, when a bug shows up, we try to contain and eradicate it,” he said. “But by the time the population is found, it tends to already be widespread and hard to handle.”

The state Department of Food and Agriculture recently granted Hoddle $544,000 to test whether a tiny parasitic wasp, also originally from China, could be the solution to the problem.

Hoddle said the wasp has a needle-like appendage that it uses to lay its own eggs inside the lantern fly’s eggs, with the wasp larvae eating and killing their hosts as they develop, eventually chewing their way out of the lantern fly eggs. However the team need to determine that the wasp won’t target or harm the ‘wrong’ target, by attacking a non-invasive native species and will conduct a three-year test in a highly secured quarantine facility at the University.

“Chances are low it will harm the wrong targets, but we have to be sure,” Hoddle said.

“We hope to be ready to release these wasps immediately when the spotted lantern fly shows up, giving us a really strong head start on the invasion.”

Research is also underway in Penn State’s College of Agricultural Sciences to document the impact of the flies on grapevine growth, health, winter hardiness, and fruit production and quality, following the USDA granting $17.5 million of emergency funding to the state of Pennsylvania in February to combat the invasive fly, which was reported by Wines & Vines Analytics.