To celebrate English and Welsh Wine Week, industry body WineGB has announced that a total of three million vines are due to be planted this year, resulting in a 24% rise in land under vine in Britain in just one year. 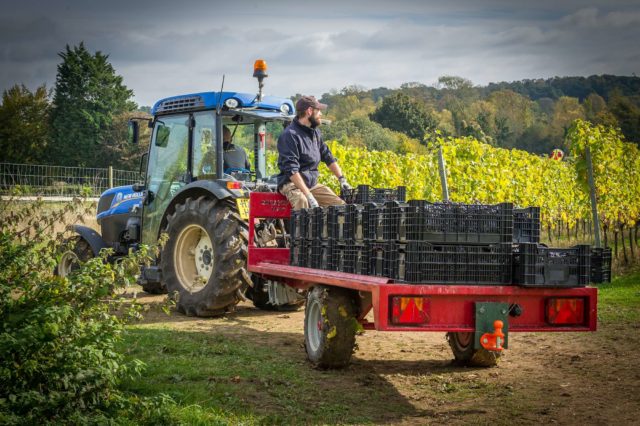 Figures previously announced by Wines of Great Britain (WineGB) had revealed that two million vines were expected to be planted this year, but this has now been increased by a further one million. This, the industry body says, makes the UK one of the fastest growing wine regions in the world.

The three million vines equate to an extra 690 hectares under vine, representing a 24% increase in the total area.

Much of the planting has taken place in the south east of England in the counties of Kent, Sussex and Hampshire.

At the WineGB AGM, it was revealed there was to be an ambitious single planting project this year in which over 1 million vines were to be planted. In his book The Wines of Great Britain, English viticultural consultant Stephen Skelton MW notes that Mark Dixon of Château Berne in Provence, who made his fortune from serviced office firm Regus, had bought Kingscote and Sedlescombe vineyards and has also taken a lease on a site at Bodiam where he plans to plant vines. Dixon is also rumoured to have bought an estate near Gravesend in Kent.

Commenting on the new figures, Simon Robinson, chairman of WineGB, said: “This impressive figure of 3m vines represents another milestone in the growth of our fantastic industry. Last year we set out our vision that in the next 20 years, at the rate of current growth, we could be producing some 40 million bottles per year. We’re certainly heading towards that. This is a thriving British industry.”

Food minister David Rutley added: “Our winemakers are innovative, creative and determined, so it’s no surprise that we are seeing the fruits of their labour now shining on the world stage.

“I will continue to champion our innovative food and drink businesses, and I look forward to seeing more of our stand-out wines in restaurants and on shelves the world over.”

While expressing pride in the growth of the industry, winemakers have expressed concern with regards to the relative lack of winemaking facilities compared to the quantity of vineyards. Last year’s record harvest volume proved a stretch for many, with a number of vineyards having to order in extra equipment shortly before the grapes were due to be processed.

IN FOCUS: THE FUTURE OF ENGLISH SPARKLING WINE

THE BEST WAYS TO CELEBRATE ENGLISH AND WELSH WINE WEEK