Kent’s Simpsons Wine Estate has launched what it claims is the UK’s first still wine to be made with 100% Pinot Meunier, one of two wines that its has released bottled with Vinolok – another first for a wine in the county. 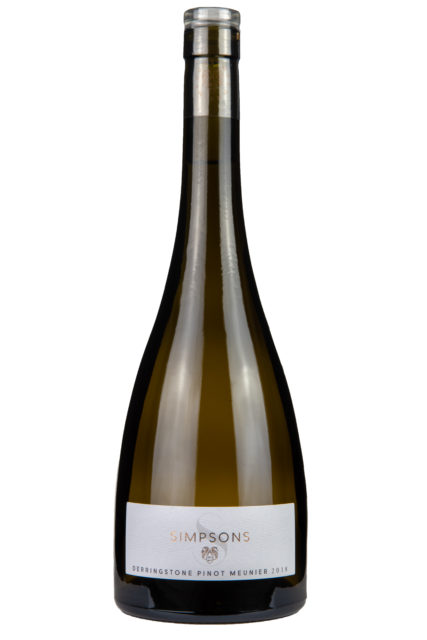 The wine was one of five new releases – four still wines and one sparkling – unveiled at a tasting at Trade in Soho last week.

Made from the 2018 vintage, the Derringstone Pinot Meunier was made using clones 798 and 799 from the estate’s Roman Road vineyard. The grapes were hand-picked and whole bunch pressed before being allowed to cold settle for 48 hours. The wine then underwent a long, slow fermentation and full malolactic fermentation. It was then rested on its lees for seven months before being bottled in spring 2019.

Speaking to the drinks business at the tasting, co-owner Charles Simpson explained why the estate had chosen to bottle a single varietal Pinot Meunier.

“We were really encouraged by the phenolic ripeness of the grapes,” he said. “Pinot Meunier is rarely made into a still wine and is usually used as a softener in Champagne.”

The Pinot Meunier will retail for £19 a bottle with a total of 5,000 bottles produced.

Also released last week was the Gravel Castle Chardonnay 2018 (£17), which will sit underneath the producer’s Roman Road Chardonnay, the Railway Hill Pinot Noir 2018 (£27) and the Railway Hill Rosé Pinot Noir (£19) – the second of the two wines Simpson has had bottled under glass closure Vinolok.

“We’re the first English wine to use Vinolok,” said Simpson. “We had to use our bottler in the Languedoc [Charles and his wife Ruth also own Domaine de Sainte Rose] as it wasn’t possible in the UK. The bottles have to be sparged with nitrogen before the wine is put in the bottle. Bottlers in the UK don’t have this facility yet.”

Speaking about the rosé, made in the Provençal style, Simpson recalls how preserving freshness as well as colour was essential.

“We wanted to get the colour right – get it wrong and it can go a dull salmon colour,” he said. “We literally got the Domaines Ott pantone colour and modelled our rosé on that.”

Both Charles and Ruth had previously been critical about the prospect of making still wine in England, particularly a still red.

“We said we’d never make a English still wine,” said Simpson. “Most of the wines Ruth and I had tried in the past had ended up down the sink. It’s different now.

“Not only have we made still wines, but we also made our first still red in 2018.

“Clones are important to us – for the Pinot Noir, we’ve used Burgundian clone 115 rather than a sparkling clone.

“We now have eight hectares of this clone – it’s used a lot in Central Otago. It’s difficult to work with and produces very low yield, but we feel it’s worth it.”

The grapes were hand picked, sorted and de-stemmed. After fermentation the wine was put into two-year-old French oak barrels for three months.

Simpsons also unveiled its second sparkling – a Classic Cuvée made with Chardonnay and Pinot Noir from the 2016 vintage.

Speaking to db for the English sparkling wine feature in April, Ruth Simpson described 2018 as a game-changer for the winery.

“It means we will finally have some decent volume,” she said. “After the 2016 and 2017 harvest, we’d picked about 30 tonnes and made about 22,000 bottles in each year, that’s tiny volumes. Our Canterbury Rosé [the estate’s first sparkling wine] which we disgorged in June and released in November last year, sold out within weeks.

“So for us 2018 means that there will be proper volume as far as sparkling is concerned.

“Everything was possible in 2018, it was the perfect year. It’s important for us to build up our reserve wine stock to ensure consistency in our products and to aim for that house style, so that no matter what happens climatically, we can still blend to style.”

Simpson also told db that the estate is expanding its winery in order to deal with the increased volume of grapes it will need to process once its 2017 plantation comes into production.

“We’ve extended half of the building around 30 metres forward and are going to purchase a second press and create a dedicated press room. This will free up more room inside for more tanks.

“As of 2018, when we saw what a really big harvest can look like, we’re having to think very carefully and make sure that we’ve got everything we need. It’s certainly not going to happen every year but we’ve got to be prepared for that if it was to happen again,” she said.