The true heir to the great pair of harvests that was 2009 and 2010, the 2016 vintage in Bordeaux has been re-scrutinised by various critics of late but how do their scores stack up with the price of the wines?

Towards the end of last year Liv-ex ran the numbers to see how the 2016 wines had performed since their en primeur campaign in 2017.

Despite the critical success of the vintage it was a fairly up and down campaign, largely hampered by some questionable decisions over stock retention by many châteaux.

Liv-ex found there had been some pretty hefty appreciation for a number of Left and Right Bank wines while others had drifted somewhat. No great surprise all in all.

In December 2018 The Wine Advocate’s Lisa Perrotti-Brown MW became the first big name critic to review the wines in-bottle and issue some scores.

She dished out eight 100 points and said there was no doubt that the vintage was a “new chapter for great Bordeaux”.

Then the in-bottle scores grew in number. Over at Vinous, both Neal Martin and Antonio Galloni both tucked in but came up with some markedly different results.

Galloni’s scores came first. There were seven 100-point wines and a good clutch of 99-pointers. He said that the, “bottled 2016s capture every bit of potential I sensed when I started tasting the wines from the barrel.”

And overall he said, “the best 2016s are powerful, richly layered, vibrant and stunningly beautiful, not to mention incredibly delicious and alluring. For so many wines and estates, 2016 is an epic vintage.”

Martin, in his last gig for TWA, had called the 2016 vintage “unequivocally great” and also awarded eight wines a potential 100-point spread.

So what did he call the wines when he tasted them more recently? “The dog’s bollocks” (which is a ‘good thing’ for those not used to the English idiom).

Only five wines were given 100-points however, La Mission Haut-Brion and Ausone not quite making the grade but Vieux Château Certan, graded 95-97 originally, actually rose in his estimation to be given a ‘perfect’ score second time around.

Critically speaking, therefore, the vintage is clearly top trumps. The one wine to get 100-points across all four critics was Mouton Rothschild, with Haut-Brion and Cos d’Estournel getting three out of four.

The only outliers, which were marked topmost by one of the critics but none of the others were: Figeac (Martin), Palmer, Pichon Lalande and Tertre Rotebeouf (Galloni), Cheval Blanc (Perroti-Brown) and Pavie, Le Pin and Lafite (Suckling).

Those are the top scores but what about where that leaves the wines stacking up with respect to relative value? 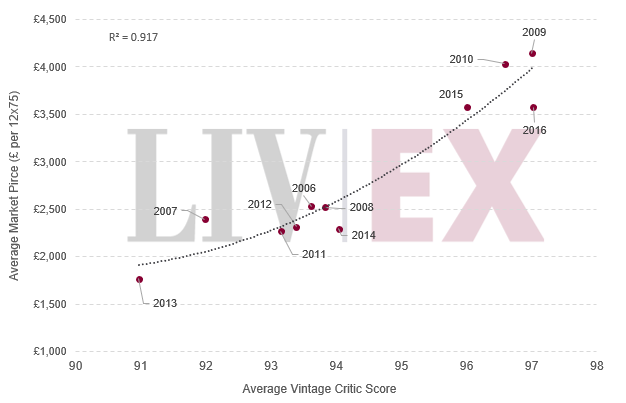 Liv-ex, using the new scores, ran the numbers again and by its metrics although the wines have an average price of just over £3,500 a case, which is the same as the 2015s, they actually have a better average score than that previous vintage.

They also have a slightly better average score than the 2010s and roughly the same as the 2009 (a hair better in fact), both vintages where the average price is over £4,000 a case.

Placing the 2016s into the context of the last 10 years, therefore, Liv-ex said the vintage falls on the right side of what would be considered ‘fair value’.

And what of individual labels, which of those represent the ‘best value’?

Well, happily, according to Liv-ex about two thirds of the big name châteaux fall on the ‘fair’ side of the trend line.

Clinet comes across as offering the best value for money, followed by Margaux the one first growth that none of the major critics awarded 100-points to yet which is hardly slacking with scores such as 98 from Neal Martin.

Mouton Rothschild, with its straight 100s from Martin, Suckling, Galloni and Perrotti-Brown was also considered fair value as were the other top favourites Cos d’Estournel and Haut-Brion.

Vieux Château Certan, another wine that picked up a couple of 100 points and was generally highly ranked, was just over the line which indicates it offers slightly less value.

Yet this is only because it is commanding a comparatively high price given its scores than Mouton or Cos.

Once the market digests these scores and the calls come in to pick up this label or that, it’s highly likely that in a few months time after market activity has pushed a few prices upwards, the likes of Mouton, Cos and others will be joining VCC on the other side of the line.

It’s important to remember however that the notion of a particular label offering more or less value is always relative.