The results from our Pinot Noir Masters Asia showed once more that New Zealand, California and Australian Pinot Noir continue to compare favourably with Burgundy.

In contrast to our previous varietal-focused wine competitions, Pinot Noir judging compared with more robust Cabernet Sauvignon or Shiraz can quickly descend into a hair-splitting debate. Arguably one of the most difficult grapes to handle, prone to spring frost and coulure in the vineyards and over-extraction in the cellar, the thin-skinned grape as judge Lawrence Osborne observed is “very temperamental”.

The antenna to find greatness is naturally more attuned at judging and, unforgivingly, any fault to be found in the fickle grape, more perhaps than in any other red variety, is unmistaken and amplified. Herbaceousness in unripe green fruits is translated into head-spinning weedkiller-like odour, while a jammy and inky Pinot is so out of character that makes you wonder if you are tasting a Rioja.

We are after all talking about Pinot Noir, a grape that doesn’t require much make-up or any at all. In fact, heavy-handed use of extraction or oak will end up masking the aromatics and typicity of the grape. The one place that has mastered the art of making Pinot Noir down to every single climat is Burgundy, which has coined a much imitated “Burgundian style.”

A great Pinot Noir, according to Linden Wilkie, founder and managing director The Fine Wine Experience, “gives a sense of lift. It’s all bouquet and on the palate [it] should feel almost gossamer light and silky while somewhere paradoxically delivering an overwhelming and lingering sense of fragrance.” 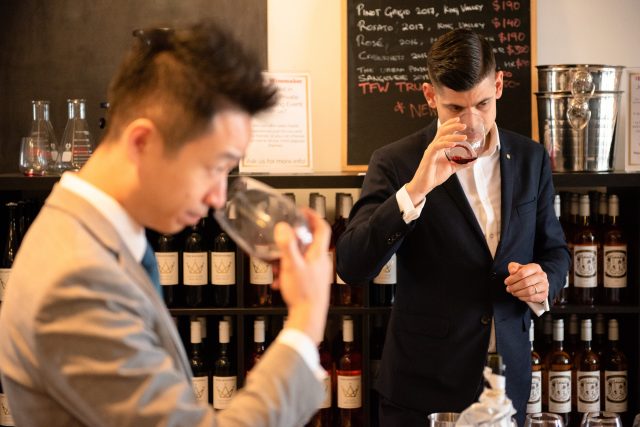 The idea of a superb Pinot is so romanticised that any wine region that is cool enough nowadays is making an attempt at mastering the grape. Many do so unsuccessfully but many more have triumphed as our results will show.

This year’s samples consisted of entries mainly from New World countries as well as Old World examples from France (excluding Burgundy paradoxically), Austria, Italy, and Greece though missing Switzerland and Germany two other important areas. The results revealed some serious contenders that are more than ready to take up the reign if the ever popular Burgundy continues to spike in price.

“Since Burgundy prices rocketed over the past few years, consumers are showing more and more interest in alternative regions for the grape variety. Pinot Noirs from the Loire Valley, Nahe, Baden, Central Otago, Sonoma or even Eastern European countries such as Hungary are getting more and more attention,” commented Szabolcs Menesi, head sommelier at the Island Shangri-la Hotel.

Pinot from down under

Outside of Burgundy, New Zealand is one of the foremost New World wine countries that has been staking its wine fortune on the red variety. Granted that the country’s reputation for Sauvignon Blanc predates Pinot Noir, but the latter might be where its future lies.

The success of the grape in the country has driven vine planting from 4,441 hectares in 2007 to 5,519 ha in 2016, according to New Zealand Winegrowers. Predominately grown in the more southernly regions such as Central Otago, Marlborough, Nelson, Waipara and Wairarapa, when done right, the grape makes elegant, structured and refined wines that can give Burgundy a good run for their money.

Another gem is from North Otago’s Ostler Caroline’s Pinot Noir 2016 made from grapes grown on the southern side of sub-region of Waitaki Valley, showing cranberry and dark cherry as well as a lift of spices.

At this year’s competition, it was Australia, a country known for Shiraz and Bordeaux blends, that delivered some of the biggest surprises.

But as Sarah Wong, wine columnist and fellow judge noted, “Australia’s cool climate regions should not be overlooked. Pinots from Mornington Peninsula, Adelaide Hills and Tasmania are producing top quality wines.” Indeed, this year the top accolade of Master (given only to wines of exceptional quality) was awarded to Montalto Pennon Hill Pinot Noir from Mornington Peninsula.

“It was a delicious wine, showing great varietal expression with discreet oak handling,” she said. The cherry on top is that the refined red falls into HK$200-HK$299 price band, making it “a great value for money”, Wong continued.

The winery’s single vineyard Tuerong Block Pinot Noir 2017 was another high performer from the competition, taking home a Gold although carrying a higher price tag in the HK$400 to HK$799 band.

Further south in Tasmania was where another Pinot Noir, this time from the Tertini winery, captured the judges’ attention, winning a Gold.

De Bortoli’s single vineyard, small-plot Riorret Lusatia Park Pinot Noir made from old vines planted in Woori Yallock, on the upper side of the Yarra Valley, had a lovely brightness and lift and also won Gold.

In California, a place that has likewise been more associated with Cabernet and Zinfindal in the past, has also carved out pockets of plots suitable for Pinot, often shrouded by Pacific fogs near the coast, or in areas at high elevation. One success was found in the Hahn Family Pinot Noir in southern California’s Monterey County.

Grown primarily in the cool-climate Arroyo Seco region of Monterey County on gravelly alluvial plain at the foot of the Santa Lucia mountains, the grapes benefit from the cool winds that come in from Monterey Bay, which ensures gradual ripening and ideal development of vibrant flavours, producing a fruit-driven wine with finesse and balance.

Click through the pages to find out more details about the competition, the judges and most importantly the results.

In a crowded wine-competition arena, the drinks business Asian Pinot Noir Masters stands out for its assessment of wines purely by grape variety rather than by region. Divided only by price bracket and, for ease of judging, style too, the blind-tasting format allowed wines to be assessed without prejudice about their country of origin.

The wines were judged by a cherry-picked group of sommeliers, senior wine buyers, educators and writers on 28 October at The Flying Winemaker in Central.

This report features only the medal-winners.

Lawrence Osborne, Bangkok-based British novelist and author of Beautiful Animals, Only to Sleep, The Wet and The Dry