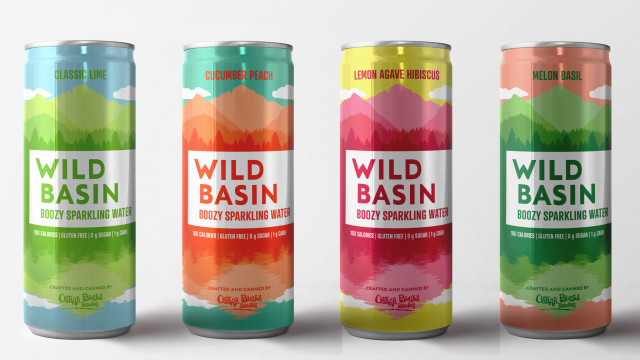 Part of the Canarchy Craft Brewery Collective, a group of “like-minded independent brewers,” Oskar Blues its to launch its hard seltzer range in the US next year.

Founded in 1997, the brewer is known for its flagship Dale’s Pale Ale and operates breweries in Colorado, North Carolina and Texas, producing 200,000 barrels a year.

The new, four-can range of “boozy sparkling waters” are to be flavoured with lime; cucumber & peach; lemon, agave & hibiscus and melon & basil. Called Wild Basin, the drinks have a 5% ABV and contain 100 calories and 1 gram of carbohydrates. They are also sugar-free, gluten-free and contain no artificial ingredients.

The brewer is looking to appeal to “active lifestyle consumers” who enjoy being outdoors and socialising and who are also health conscious.

President of Canarchy, Matt Fraser, commented: “The response from both distributors and retailers so far has been tremendous. We’ll do whatever it takes to ensure that we have product in warehouses and on shelves”.

In order to do this, the brewer is investing in new canning and packaging lines in order to cope with demand.

Oskar Blues CMO, Patrick Daugherty, added: “Wild Basin is unique in that it challenges some existing category conventions. Our goal is to introduce something that can help grow the category and give drinkers a true craft option in hard seltzer”.

Wild Basin Boozy Sparkling Water will launch in Colorado and North Carolina in January and is due to be rolled out nationwide in the coming months.

Among the brewers branching out and investing in new low and no alcohol products include Belgian brewer Duvel which bought a 60% stake in east London Kombucha brand JARR last month, and Heineken-owned brewery Lagunitas, that launched a non-alcoholic sparkling water inspired by its eponymous, flagship IPA in August.

Last month it was revealed that over half of the Brits who took part in a OnePoll survey funded by Carlsberg said they have tried at least one non-alcoholic drink, while 52% agreed that no-alcohol beer has become more socially acceptable in the past two years.