In 1938, Antonio Argiolas, founded the hallowed Argiolas on Sardinia, an estate that has helped put the Italian island on the world’s fine wine map. Eighty years on, his granddaughter, Valentina Argiolas, looks ahead to the next eight decades and beyond, with the same resolve from his grandfather rooted in their firm belief in Sardinia’s local grapes, which they believe hold the island’s past and future. 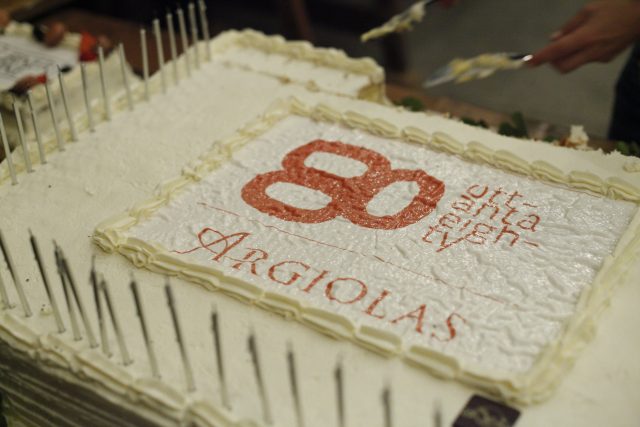 This year marks the 80th anniversary of Argiolas, the famed winery in Sardinia, located off the western coast of Italy. To celebrate the milestone, the winery carried out this year’s harvest, “exactly like 80 years ago”, Valentina Argiolas said.

More than 60 of the winery’s overseas importers were invited to the winery to pick grapes, press wines using the traditional wooden basket press and participate in foot treading to, “experience the harvest like 80 years ago”, she explained.

“The idea of our philosophy has remained the same [which is] to produce wines with traditional varieties, abandoned varieties but with an international taste, capable of matching with food anywhere. It’s the same idea we had then and now,” said the third-generation owner when asked about her family legacy.

There are also similarities in the latest vintage 2018 with Italy’s legendary 1988 vintage, the year when the winery’s top red wine, ‘Turriga Isola dei Nuraghi’, came into being.

Created by family patriarch Antonio and Italy’s revered oenologist Giacomo Tachis, the wine is made with a dominant percentage of Cannonau (Grenache), blended with Malvasia Nera, Carignano (Carignan) and Bovale Sardo, an ageworthy red that combines both Sardinian traditions and modern winemaking techniques, following Antonio’s trip to the US and Argentina in 1978.

“The two vintages are very similar,” said Valentina when speaking of the wines, though 2018 vintage was markedly wetter than 1988. The 2018 saw an “unusual” amount of rain in Sardinia with rainfalls recorded almost in every month except July.

However, “volume is more or less the same,” she commented on the production.”Alcohol and sugar contents are a bit less, but [there is] more freshness in the wine particularly of the whites like Vermentino.”

Over the last 80 years, the winery has also dedicated itself to researching local varieties to preserve biodiversity, said Valentina, adding that each year a part of the company turnover is allocated to research on grape varieties, sustainability and integrated farming.

One of the biggest changes the winery has undergone over the years is its more progressive efforts to protect the local environment and community. “When we started we practiced integrated farming between biological and traditional [methods]. Now we are doing the same but increasing in terms of environment protection and using renewable energy,” said Valentina, adding that this philosophy will carry on into the future of Argiolas.

The winery is not yet certified organic but it employs sustainable practices and uses less intervention to help vines defend themselves in a natural environment.

Germany, the UK, Switzerland, the US and Russia are key markets for the winery with growing market in Asia.

The winery is also building a hospitality centre with a guesthouse and restaurant set to open by the end of next year to help better promote wine and tourism.

“Eighty years from now, I hope we can still maintain its original characteristics… but in a very modern way, to produce original wines to express the terroir that are also environment friendly and use varieties that can resist drier temperature,” she concludes.