Douglas Blyde accompanied fifth-generation Austrian winemaker, Laurenz (Lenz) Moser on his 49th visit to the People’s Republic of China last month, taking in Ningxia, where, at Château Changyu Moser XV, Moser (now in his thirteenth year of consultancy) helps it to produce Cabernet Sauvignon-led wines, including a lushly textured blanc de noirs, and Yantai, home to the HQ of Changyu Pioneer Wine Company. 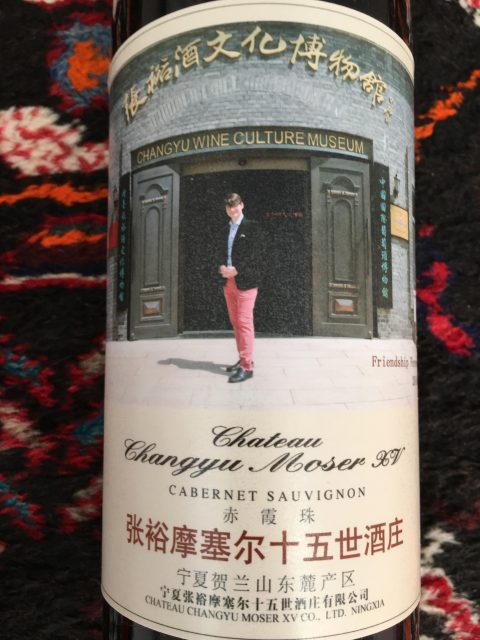 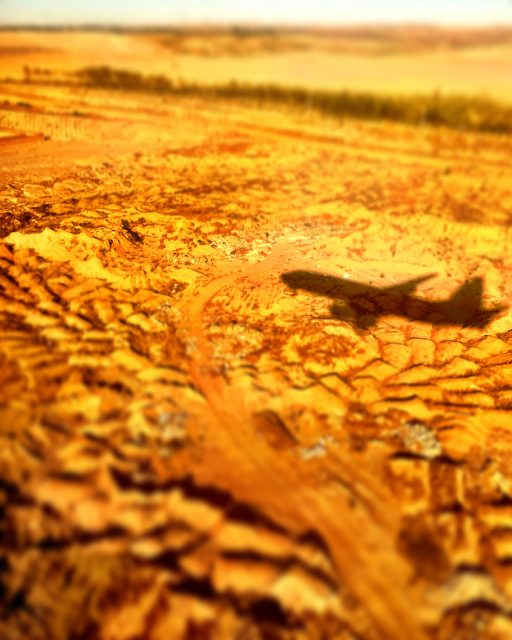 1,700 miles west of Beijing, Ningxia is an ancient, mountainous, agricultural landscape nudging the Gobi Desert, featuring original earthen fragment of the Great Wall. Since a fruitful grape trial in 1984, it has become China’s fastest-growing wine region.

Enthusiastically endorsed by the government who identified the wine industry as a means to provide jobs in this not especially prosperous region, close to 200 castles of wine have risen from the sand, or are under construction, providing 120m bottles of wine from 36,000 hectares of vines (by comparison, New Zealand has 37,000). A new wine road traces the dramatic eastern foothills of the Helan Mountains. 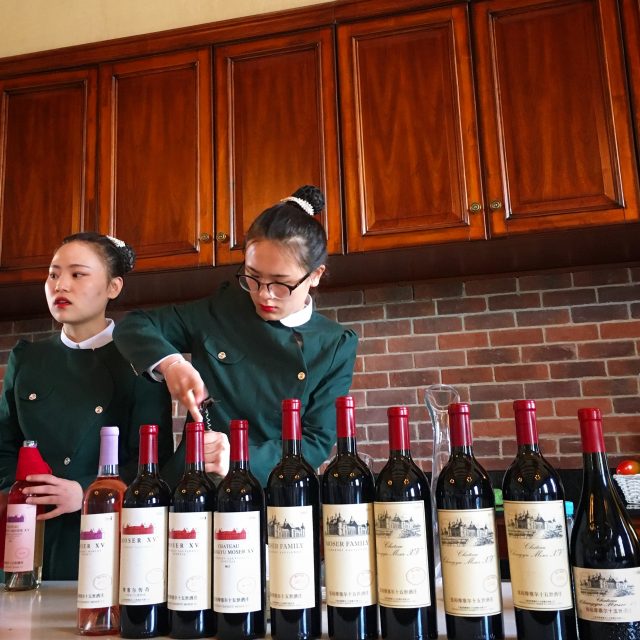 Having been compared to the wine lands of Argentina by both Moser and other winemakers, including Argentinean, Gaston Sepulveda, Ningxia is high (1,100m), dry (average annual rainfall is less than 200mm) and dazzlingly bright (3,000 sunshine hours), but also cool at night. Such a climate results in notably thickly-skinned grapes, “which give protection against evaporation”, says Moser. Moser’s reds are intensely-stained, fragrant and replete with a sense of freshness. However, compared to his native New Zealand, Mike Insley, winemaker of Pernod Ricard’s Helan Mountains, notes the apparently benign UV. “I never burn here compared to Marlborough, where I’ll turn red within minutes outside!” 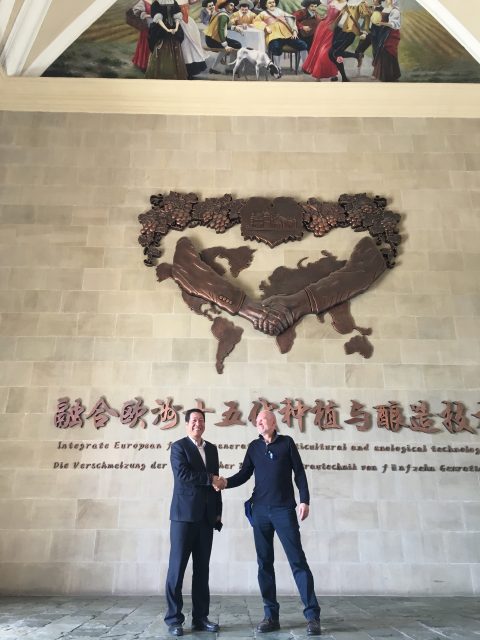 Canadian expert on Chinese wine, Jim Boyce, illustrates these figures. “It would take an hour for that much baijiu to flow over Niagara Falls.” (Estimated rate of 168,000 cubic meters per minute.)” 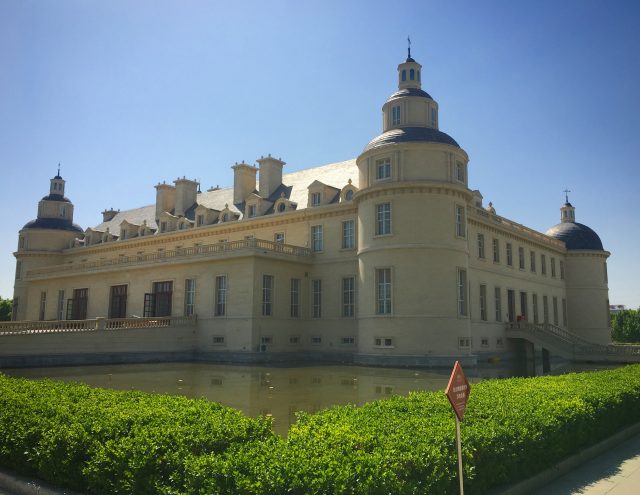 Moser praises China’s drive. “It’s the oldest living civilisation and stronger than ever. It never stops and keeps me agile. When I text someone in Europe at 6am, I get an answer back at 8am, here, I hear back two minutes later.”

In order to make friends, “check the pulse” and “tell people what we’re doing,” Moser regularly visits other wineries, although he notes his comrades were “suspicious initially – what is this Austrian doing, they wondered”.

Moser recalls the inauguration of Changyu Moser XV, which took two years to build, on 18th August 2013. “I was flown in for 18 hours of interviews.” 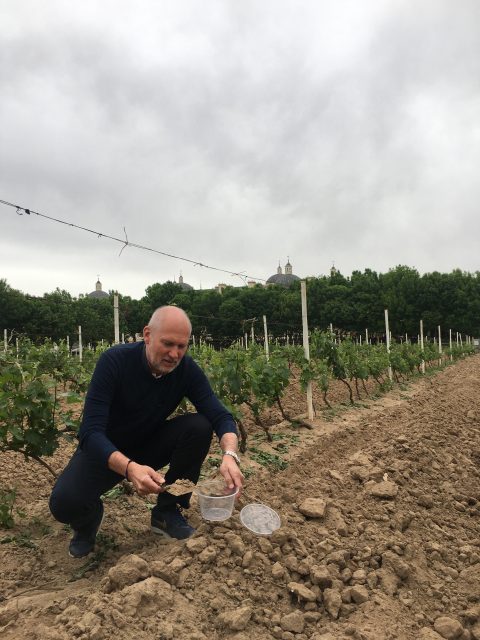 Ningxia’s ‘Achilles heel’ is its vineyards, says Moser, “which aren’t trained the way we’d like because of lack of knowledge.” However, his vision is to farm biodynamically. ‘Give us 5-10 years, but you can already taste the future.’
Noting any suffering ‘is outweighed by the goal’, Moser taught his eager Chinese team ‘it can be okay to say No’ while ceasing traditions including harvesting by rote. “Typically, grapes were picked before the Moon Festival. But grapes don’t care about festivals! Let them ripen.”

Moser mentioned that of only three optical grape sorters in China, one is in Changyu Moser XV’s workshop. 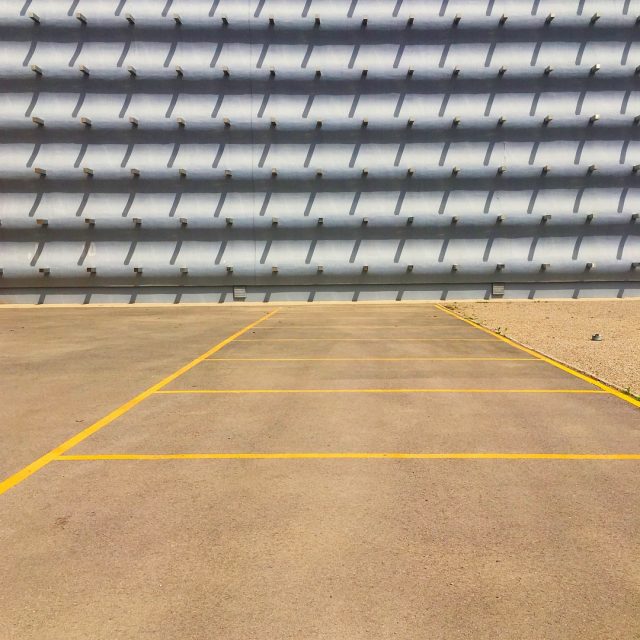 To survive bitter winters, vines, angled so as not to break, are buried in November, before being excavated, springtime – a process which can amount to 40% of the labour budget. Picking is also done by hand throughout Ningxia.
Founded in 2013, Chandon’s China foray follows those in Argentina, the USA, Brazil, Australia and India.

One side of the chic, horizontal skyscraper winery represents how vineyards look come winter, with just posts exposed. 68 hectares of Pinot Noir and Chardonnay are sown – and signs suggest the home market already wants more of the slick rosé. Chandon is the first producer in Ningxia to pick grapes – as early as 9th August – to ensure a sense of tension in traditional method, sparkling wines. 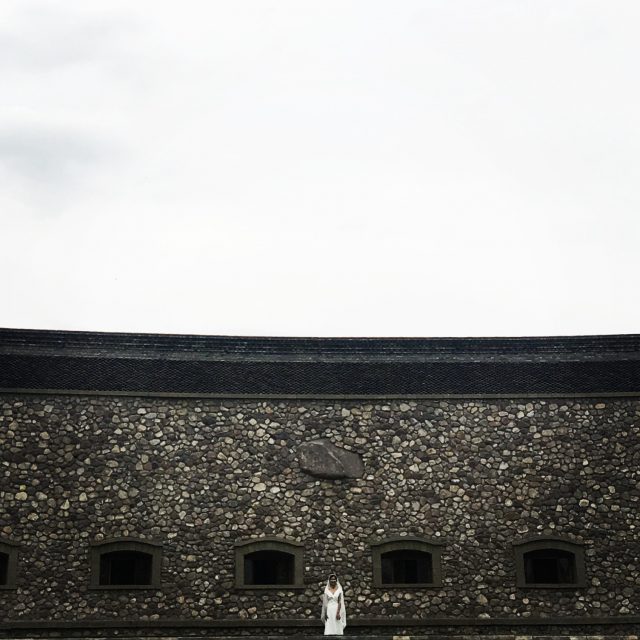 By contrast, Yuanshe is very traditional in its vernacular, being a fortress-like tribute to its apparently non-drinking stonemason owner. Expected to last 1,000 years, this living museum, with salt-soaked hay roofed hall and busy wedding park takes the sweep of a traditional emperor’s hat from the Song dynasty. The rock solid facility is supplied by 100ha vineyards of Cabernet, Merlot, Shiraz and very promising Marsellan. 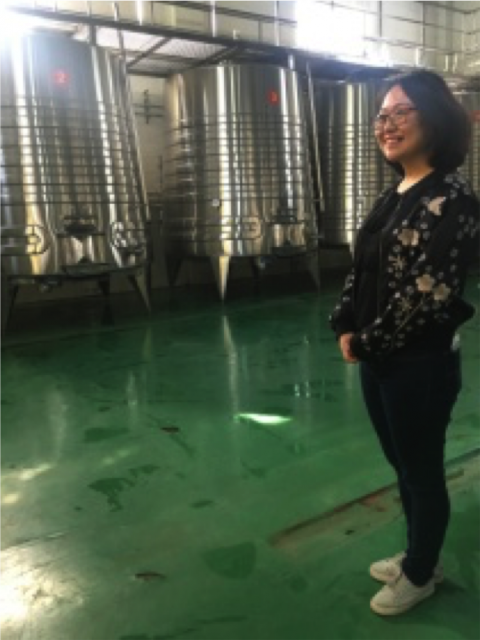 Established in 2005 by local wine luminaries, Rongjian and Wang Fengyu, the boutique Helan Qingxue features 27ha of Chardonnay, Merlot, Cabernet Sauvignon, Marsellan, Malbec, and – coming soon – Tempranillo, overseen by the charismatic Zhang Jing who previously worked in the Rhone, Australia and trained at UC Davies. Zhang Jing has gradually grown her operation, keeping, nostalgically, part of an albeit deceased tree within the expanding winery’s fabric. 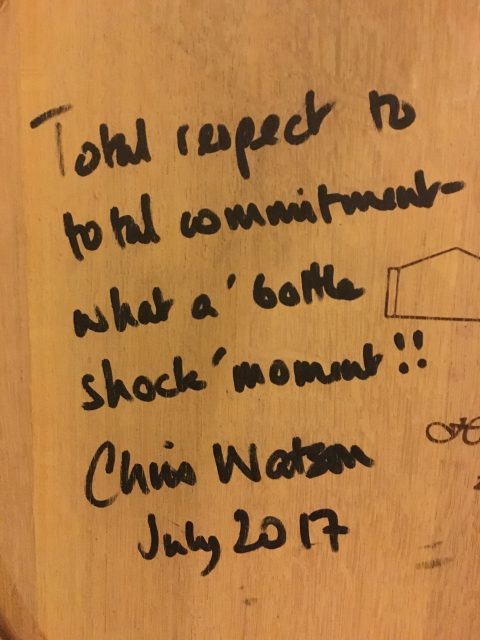 Barrel ends of sought after Dadoux casks are signed with words of support for impressive efforts such as Bordeaux blend, Jia Beilan Grande Réserve of which the ‘09 triumphed the Decanter World Wine award in 2011. Her fleshy Pinot Noir and floral tank sample of Marsellan (limited to just 1,300 bottles) also hold much hope. 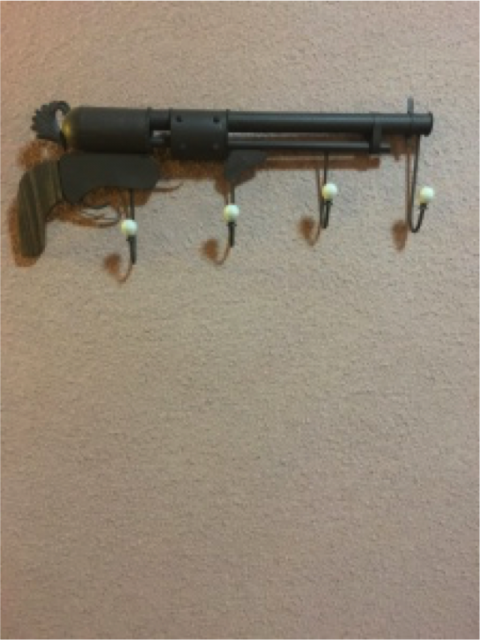 After a decade living in Germany, Wang Fang (aka Crazy Fang) returned to China in 2011, building on the knowledge of her winemaker father, Wang Fengyu (who helped found Helan Qinqxue very close by) to establish Kanaan winery. Noting the corkscrew is not likely to be found in every Chinese domicile, Wang Fang produces a belter of a bone dry Riesling under screw cap as well as, nodding to her love of horses, Bordeaux rangers, Wild Pony, Pretty Pony, and fulsome, peppery icon, Black Beauty.

To recall her recent past, Wang Fang regularly soaks up the Bavarian atmosphere of Yinchuan’s brewery bar, Paulaner at the Hotel Kempinski. This modified gun coat hook was a flea market find. 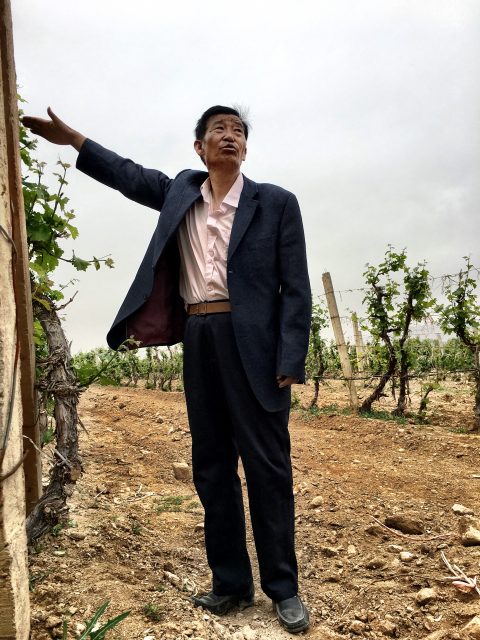 With a logo not unlike a poker chip, a subconscious comment, perhaps on the brave new world that is winemaking in Ningxia, Legacy Peak has a Grand Cru-grade vineyard sown within sight of the Xi Xia royal tombs on land apparently fortuitously incinerated (in terms of fertility) by an invading Mongolian army.

The vineyard came about when influencer of the Ningxia wine scene, Wang Fengyu encouraged Liu Zhongmin, father of Legacy Peak’s owner Liu Shi, to amend his focus from trees to grapes over two decades ago. Likened to the ‘Masseto’ of China, there’s no doubting the prowess of this estate’s dirt, evident in wines such as the top Cabernet/Merlot blend, Kalavinka, which shone even despite Zhongmin’s chain smoking during the tasting. 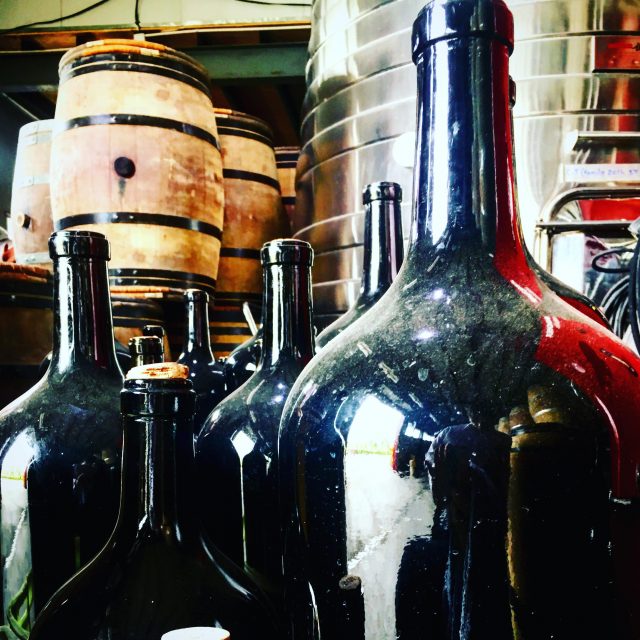 Featuring reproductions of symbols found in local caves on her labels, Emma Gao’s, Silver Heights is arguably Ningxia’s most famous boutique winery, which is also one of the most northerly in the region.

Gao worked for importer, Torres as a wine educator, before training as a winemaker in Bordeaux, where she met her husband, at Château Calon-Ségur. Fortunately, the bracing, mineral Chardonnay, and precise, suavely-textured, Emma’s Reserve belie the raw, rural setting and brutally functional winery. 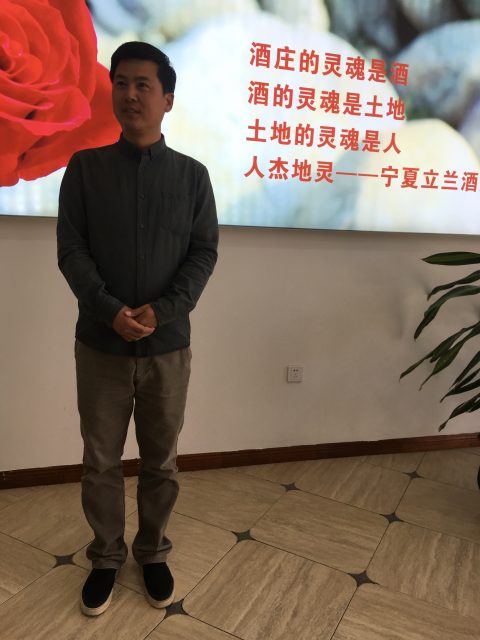 Another Ningxia château is Lilan, overseen by former fashion designer, Qing Song Sian who says he knows every barrel of Cabernet, Merlot, Syrah and Chardonnay, reaped from a total 100 hectares, maturing in the gravity fed, Zen-like winery. These he showed in a plant-filled tasting room, emanating a breezy outcrop. 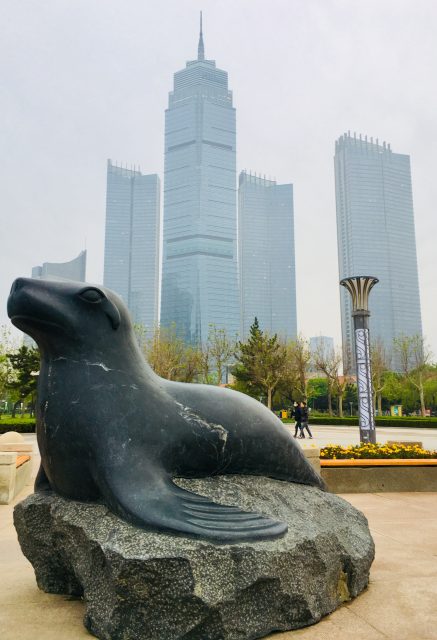 960 miles east of Ningixa, port city, Yantai is famous for its harvest of allegedly aphrodisiac sea cucumbers, flawless apples and wine supply. With an annual rainfall of 670mm, it is not unusual to begin to see rust on cars – unheard of in Ningxia. 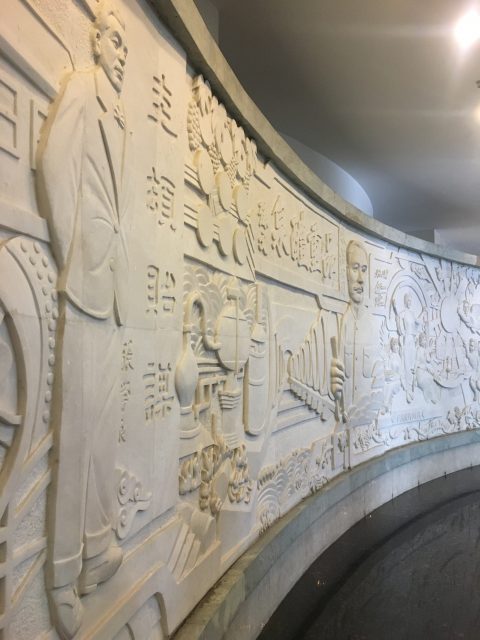 And vines no longer need to be hidden come winter. Yantai is home to China’s oldest and largest producer, Changyu Pioneer Wine Company, “which has no sugar-daddy,” says Moser. It was established in 1892 by diplomat, Zhang Bishi – then Asia’s richest businessman – who employed the services of Austrian consul, Freiherr von Babo, as winemaker. I learnt from a display that Bishi’s nephew, Chang Chenqqing, died of overwork at 40. 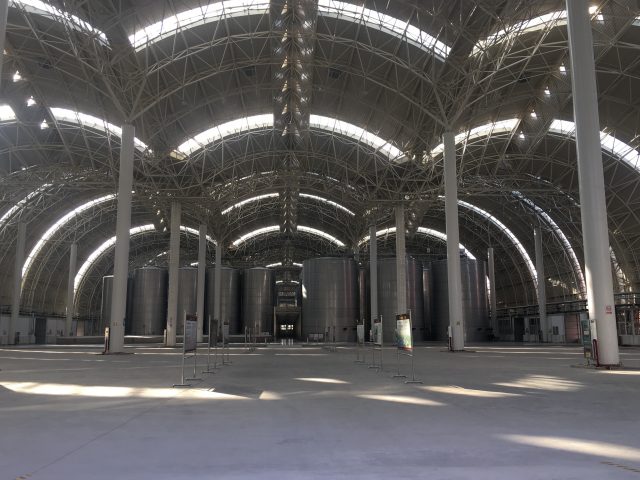 Wanting to be well prepared for an uptake in homeland consumption, Yantai Changyu International Wine City evokes a series of slumbering barrels from the air, with the winery, store and bottling line, complete with self charging forklift trucks, collectively being larger than terminal three at Beijing airport. “There’s home court advantage here,” says Moser. “Everyone wants to be in China.” 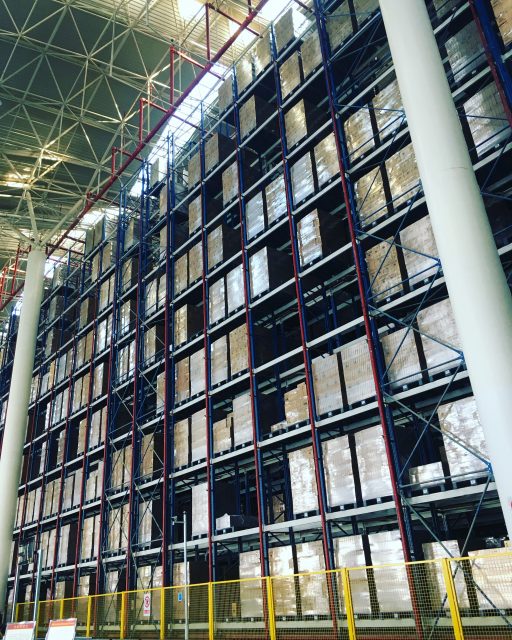 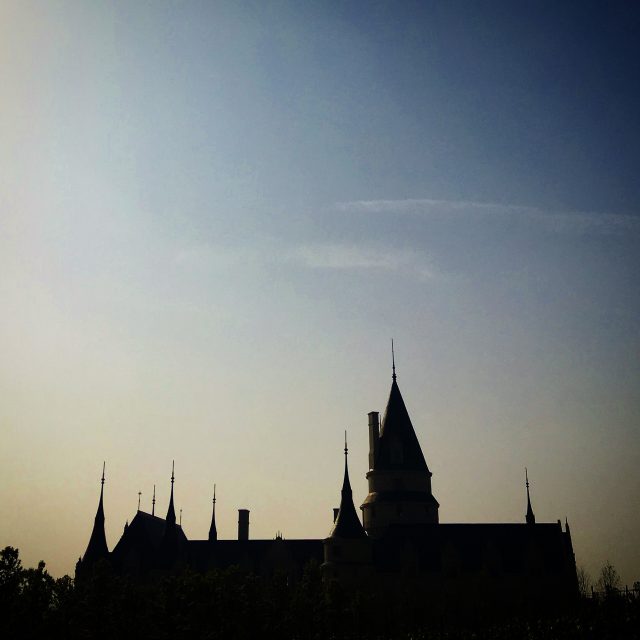 Yantai Changyu International Wine City comprises the soon to open Château Tinlot, named after the late OIV Honorary President, Robert Tinlot, who described Changyu wine as “absolutely comparable with world-famous brands; it will be definitely welcomed by the world”. 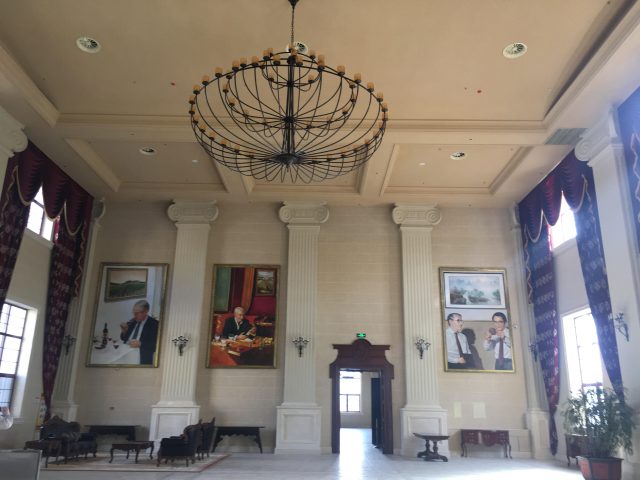 Also poised to open close by is the Koyac Brandy Château complete with sunny courtyards, Chalvignac stills and acres of barrels. Château Changyu Moser XV’s wines are easily available in the UK via Berry Brothers & Rudd and Bibendum. 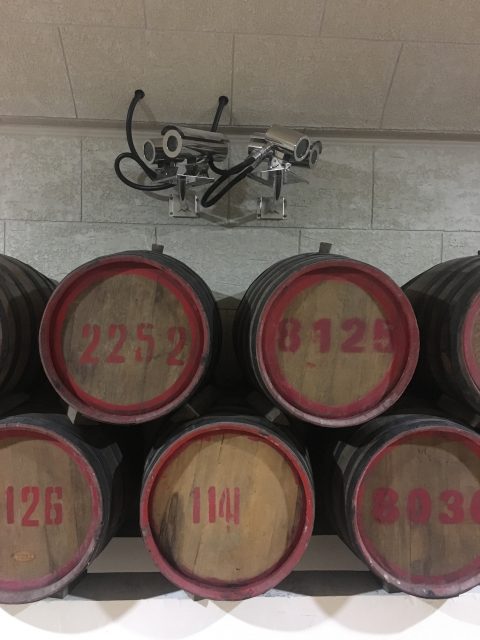